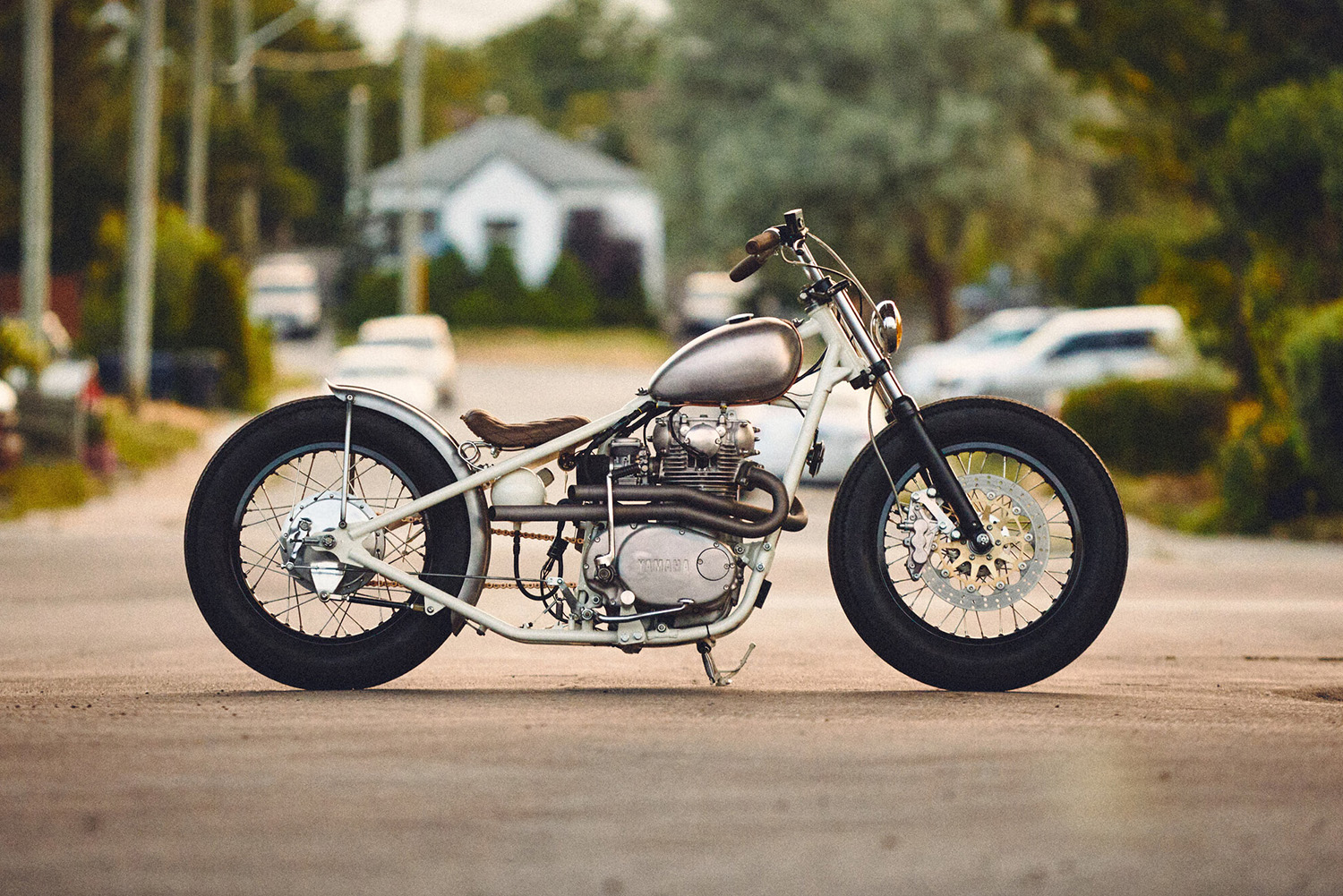 In the post-war period, the Minimalism movement took off, influencing heavily the visual arts, music, architecture and design. And if there is one style of motorcycle that fits that bill its the bobber, and many veterans led the way performing bob-jobs on the sorts of machines they had ridden across war-torn Europe. Having just the bare necessities made a lot of sense then, and now in a technologically overloaded world it’s just as relevant. For Canada’s Brian Kates the idea to build a bobber was not only a chance to explore simplicity but also an opportunity to test his skills. On all fronts he’s knocked it out of the park, with this stunning Yamaha XS650 Bob rolling out of his Motobrix workshop in timeless style.

Read about the artists and designers most influential in the minimalist movement and their desire to do the most with the least was evident across the board. So when Brian stumbled across a bunch of bits, his creative mind got turning, “I built it out of a $200 pile of parts that were sitting out in the snow on a trailer. The idea with this bike was to push my fabrication skills to the next level, and to build a minimalist XS650 bobber. Batteryless, kick-only, suicide shift, foot clutch, no turn signals, raw steel tank and fender,” he explains.

These are all the features of the bobbers of 80 years ago and with just a few modern touches thrown in, you get all of the character without any of the oil leaks! Starting with a big pile of parts meant there was no strip down required here and Brian’s first step was to clean up the frame and do something about the sprung rear end. The solution to righteous rigidness comes in the way of a Voodoo vintage hardtail kit. Fully welded in house, it provides an ultra-clean conversion and with the extra stretch and 3” drop it gives the Yamaha the perfect basis for a badass bobber!

To get things rolling, “I took the wheel hubs from a TX500, also in the pile of parts,” Brian tells us. These being the version designed for spokes allowed him to lace them up to the dimensions of his choosing, using 18in rims in black, front and rear with stainless spokes. Then he wrapped them up in a pair of Firestone Deluxe Champion tyres, in 4.50 x 18 to get the period correct appearance. Upfront the shortened forks get the balance of the bike looking just right, while braking gets a major overhaul with a clever use of a variety of modern parts.

The setup uses a Ducati monster brake rotor and Ninja ZX-7R front brake caliper that is made to fit using custom brackets and spacers. With a braided line and all new master cylinder the stopping power is seriously impressive on the little bob, without taking anything away from its appearance. On the flip side, the gear changes are retro and radical in the true outlaw spirit of doing things a different way. Brian fabricated a sweet suicide shifter that places the lever right at your hand next to the seat. With the foot clutch using a similarly styled actuation rod and linkages for a super neat install.

The styling of the Yamaha is kept clean and simple, but that doesn’t mean there aren’t some ultra clever touches that you’d never pick on first or even second inspection. The small raw finished steel tank gets the look just right, but Brian had an idea for boosting fuel capacity. With most bikes in the bobber category utilising an oil tank, they’ve become part of the look. With the XS650 not needing the external unit, he used the Pill style chopper oil tank as an auxiliary fuel supply, “with a fuel pump and AN fittings and hoses feeding the main tank against gravity.”

Above the neat install the chrome sprung seat provides the only rear end bump absorption and is finished with a super slick diamond-stitched leather seat. Behind that a tank matching raw steel fender completes the minimal bodywork and hugs the tyre close with a set of custom struts. The hand made bars suit the style to perfection, with the brown grips and raw finish all part of Brian’s cohesive design philosophy with just the frame and faux oil tank finished in cream.

With the 650cc twin-cylinder engine coming from the same pile of parts as the rest of the bike, it couldn’t just be slapped together. First, it was vapour blasted and bored 0.5mm over, before being fully rebuilt. Keeping things simple and stripped down there is no battery, just a Hugh’s Handbuilt CDI, and capacitor to complete the electrical system. But you can hear how sweet it all runs thanks to a set of foam filters and the killer handcrafted exhaust that runs tight to the engine and exits in a staggered pattern to booming effect. This is minimalism at its best, there is nothing you don’t need as you ride away on a brilliant bar hopper that is all about motorcycling in its purest form.