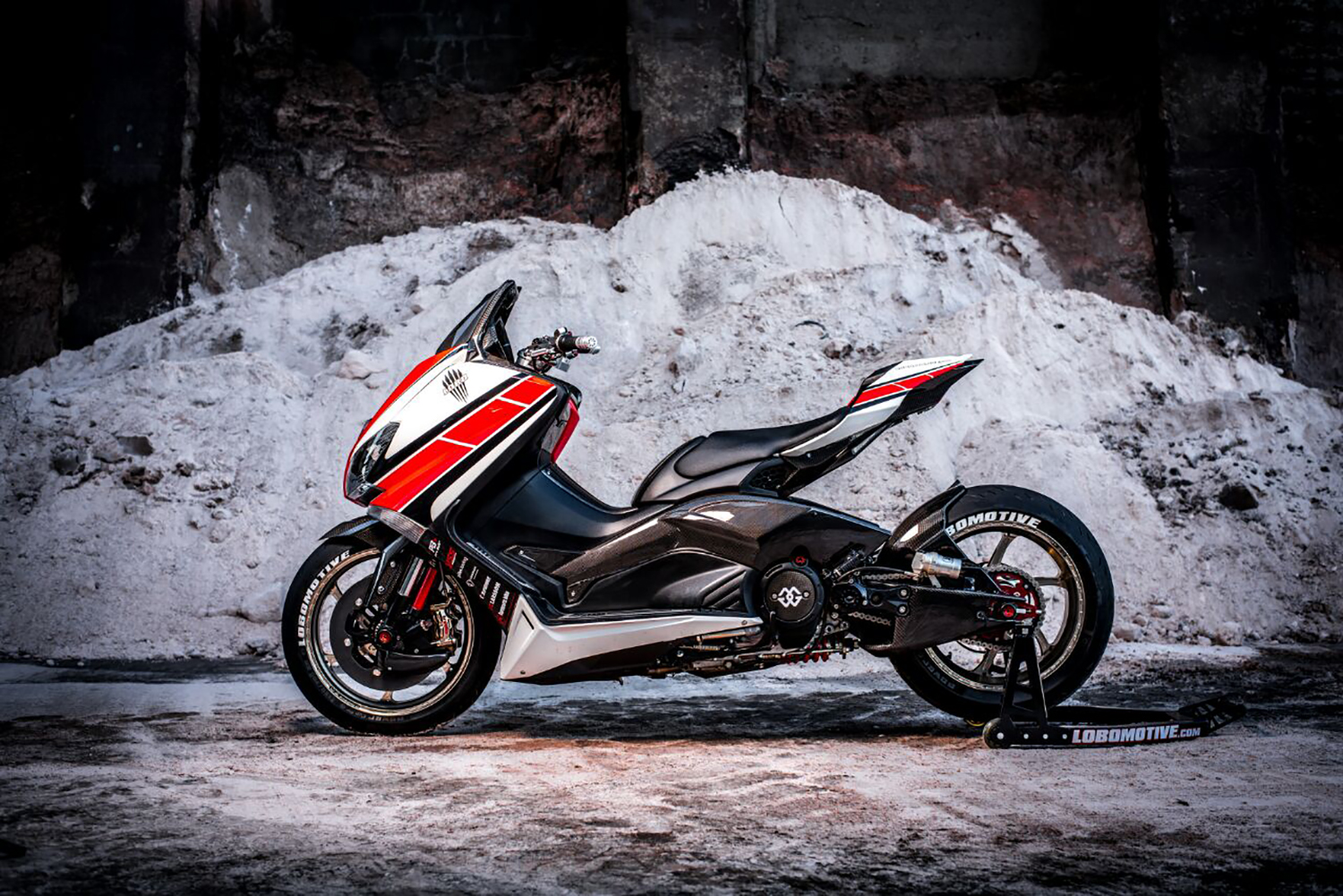 In the world of motorcycling, the scooter might have two wheels but it’s never really been part of the gang. The rivalry between the Mods and Rockers saw the peak of the battle, but the hand wringing by the British press over a few dust-ups was more than a little hysterical. That said, the scooter has always been a useful piece of transport but if you wanted your kicks, you stepped up to a real bike. That was until Yamaha introduced the TMAX in 2001 and put the big bike boys on notice. It didn’t take long for customisers to take note and Xavi from Lobomotive is the latest to turn to the TMAX. The Barcelona based builder has given his Scoot a full superbike makeover, ready to conquer all at the traffic light GP.

When the TMAX was released by Yamaha nearly twenty years ago it was the most powerful scooter to ever hit the market. A succession of updates has kept it at the top and so confident is Yamaha of the commuter machines performance that in 2017 they sent a group of sports bike test riders to South Africa to put it through its paces. Al Fagan, former BSB rider and of 44Teeth fame noted, “It handles like a proper weapon…, it’s a naked bike dressed in scooter clothes.” But it was this exact model, 2017, that failed to impressed Xavi. “I did not like the new TMAX and decided to do what it should have been, more sporty!”

So he purchased a 2011 model that had grown to 530cc at the time and set about crafting a machine that was part TMAX, part R1 and 100% better than anything Yamaha could ever have imagined! But where to start, there is no playbook when it comes to building a superbike scooter and Xavi has earned his reputation at the other end of the spectrum, building some of Europe’s toughest Pro Street Harleys. So, all you can do is start ripping in and the commuter styled bodywork and the big comfy seat were the first items to go.

But the major change in engineering would come from a switch to upside-down forks instead of the tiny little telescopic units matched to their equally small front rim. So this had to be tackled first, “proportions were very important to the project and when putting 17in wheels on, the front was very close to the radiator, like an accident against an unrepaired wall,” Xavi laughs. So the measurements were done and a custom top yoke was machined with an increased offset that pushes the front wheel out 40mm, and to match the rear was given the same, with a set of swingarm extenders in machined red alloy.

Now the front forks could be slotted in and they are a seriously trick piece of kit, Showa BFF units, genuine world superbike technology. To match, the rear sports a custom YSS shock that was built for the project, and the remote reservoir is mounted to the swingarm for safekeeping. Next up was the wheels and it doesn’t get any sexier than a set of 17in Oz Racing wheels, featherweight and strong in their magnesium alloy construction. “the weight was very important in this project, especially unsprung mass”. So why not keep the crazy train rolling and fit carbon disc brakes, 330mm fronts and a single 220mm rear.

To clamp the expensive carbon Xavi turned to the MotoGP paddock and ordered a set of CNC machined alloy, nickel-plated, Brembo GP4RX calipers… this is crazy, and we love it. Finally, to finish out the craziest scooter rolling chassis around, the wheels were wrapped up in sticky Michelin Power Cup Evo tyres. It was clear now the looks couldn’t let things down and to go from dork to supersport the rear end needed a rethink. To make it work Xavi customised the rear frame and fitted the entire tailpiece from a Yamaha R1 with a custom seat to match.

Then it was the turn of the carbon fibre and it is absolutely everywhere. From the small parts like the brake vents to the swingarm covers and the full dash assembly. Both the front guard and rear hugger are made from the lightweight, premium material and if he could find it in carbon it was fitted to the TMAX, until all the body was CF. Further inspiration was taken from the R1 for the signature Yamaha red and white paint scheme, there are even speedblocks at the rear and the bikes sponsors down the sides. While the racing theme continues with Xavi’s own alloy clip-ons and components from EvoTech and Gilles Tooling like you’d find in any race paddock.

In total 25kg has come off the bike and the already impressive power to weight ratio was becoming a sensation. But Xavi had more power in mind and the parallel-twin was treated to the best with a set of headers from Termignoni and the rest of the system genuine Akrapovic R1 for the ultimate in WSBK styling. With the engine tuned to make the most of the gains, a full chain conversion with alloy sprockets was completed to keep it all holding together. Now when you climb aboard and “twist and go”, this TMAX really does go, we’re talking about a bike capable of embarrassing many a Rocker on his “real” motorbike. And in doing so, Lobomotive has completely raised the bar when it comes to what’s possible with a Scooter.