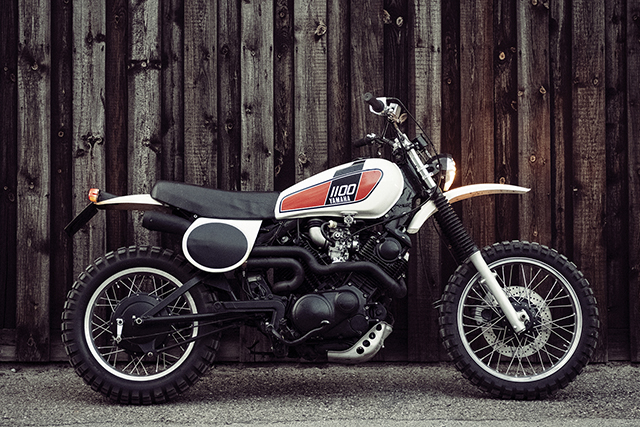 To say the Yamaha XT500 is a legendary bike would be an understatement. More than 40 years later, it is still one of the best thumpers in motorcycle history. After winning the Paris to Dakar rally shortly after its release in 1976, it paved the way for future enduro and off-road bikes. But what if it was released today as a larger capacity scrambler? Jesper Johansen from Slowbuilt in Copenhagen, Denmark, wanted to build a larger capacity XT with all the retro cues of the original classic – only bigger. “I always loved twin shocks dirt bikes,” he explains. “Especially the Yamaha XT500 and HL500 – had a few over the years, especially the white 1976 model XT with the iconic tank decals.” 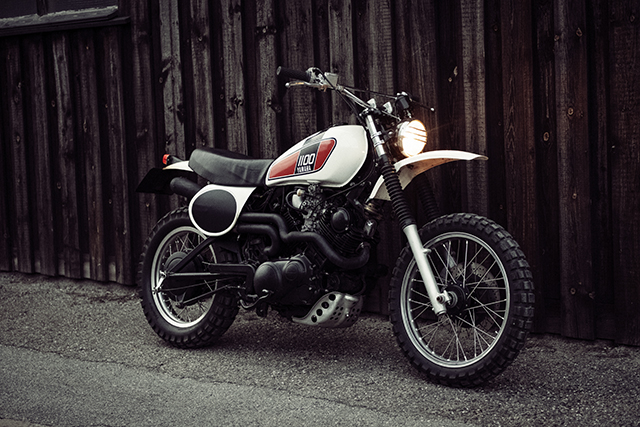 Slowbuilt is a small custom shop based in the heart of Copenhagen. Jesper named it after his personal mantra: good things take time. “I don’t want to rush the builds because the best things take time. I mainly do custom modifications and service on older metric bikes.” 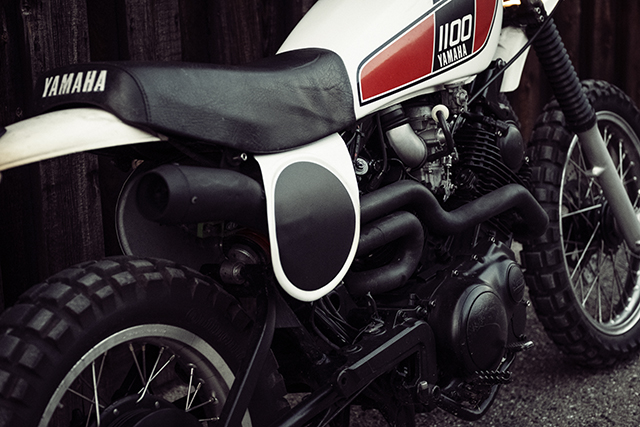 Jesper has an impressive stash of motorcycles – over 12 at the moment – and one of these bikes turned out to be the perfect donor for his supersized XT project. “In my garage was a Yamaha XV920 Virago rat bike with a XV1100 engine that I found 4 years ago and didn’t know which way to go with it.” After playing around with it in Photoshop, Jesper decided the monster XXXT would work. “The aesthetic and proportions were really important to me. That’s why I built it in Photoshop first. Nice to know if the idea works or not.” 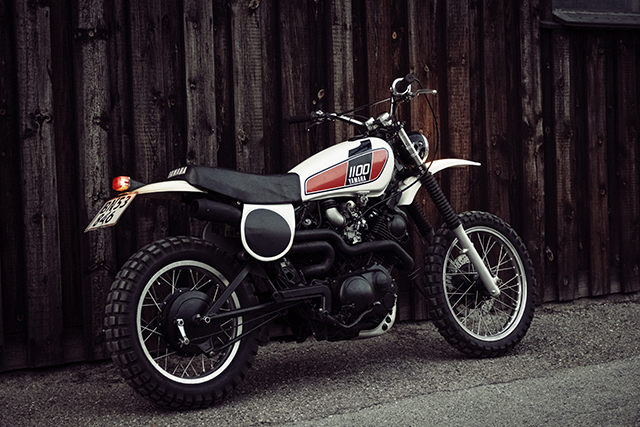 With Jesper happy with how it looked on the screen, it was time to start the surgery. The original bike was a beat up old 1987 XV920 with a 1999 XV1100 engine – which was the only thing in good condition. Jesper started by stripping the bike right down and making a custom rear sub frame with a modified XT250 seat that had the right enduro proportions. Next he sourced parts from multiple Yamaha models to create the ultimate Yamaha bitsa. He used an XS650 front wheel, a modified XV535 rear hub, a XV750 fuel tank and custom alloy side panels. “I also used as many XT500 parts I had laying around, like the fenders, lights and so on. So now it rides on 17” at the rear and 19” up front, fitted with TCK 80 tires.” 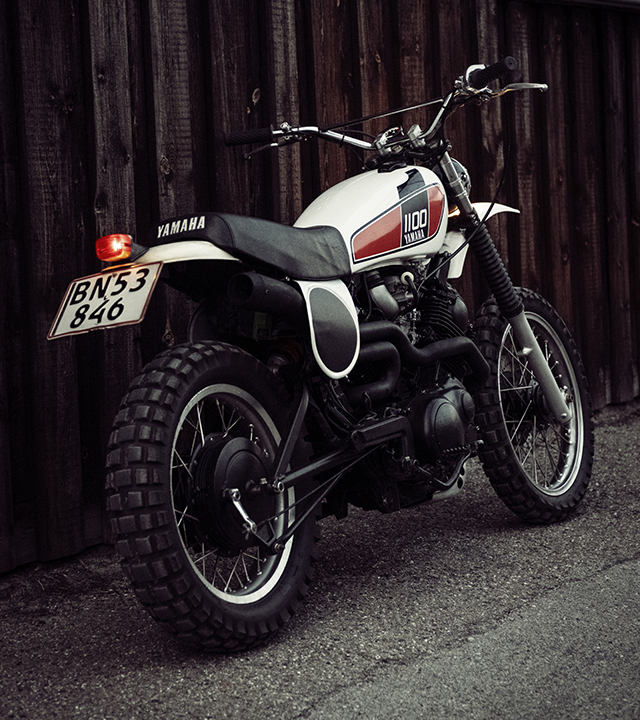 After Jesper was finished removing everything that wasn’t a necessity, the bike had lost an incredible 60kg (130 pounds). “With a curb weight of only 160kg it handles like a dream. Much more like an XT, which makes it perfect for some light off-roading.” 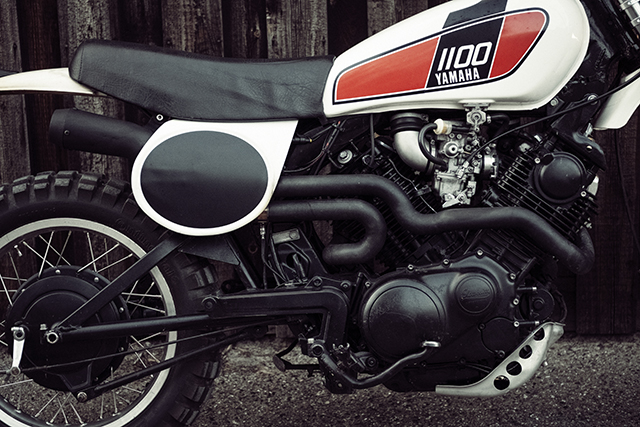 Slowbuilt has created a bulletproof daily driver that is fun in the city and can handle the fast roads as well as some dirt – and it wouldn’t look out of place in a Yamaha showroom. As for the bike’s future, Jesper plans to roam the streets of Copenhagen for a while and then put the bike up for sale – to fund the next project, of course. 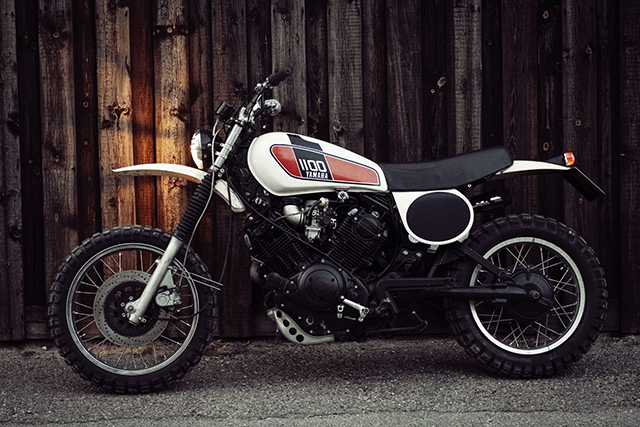 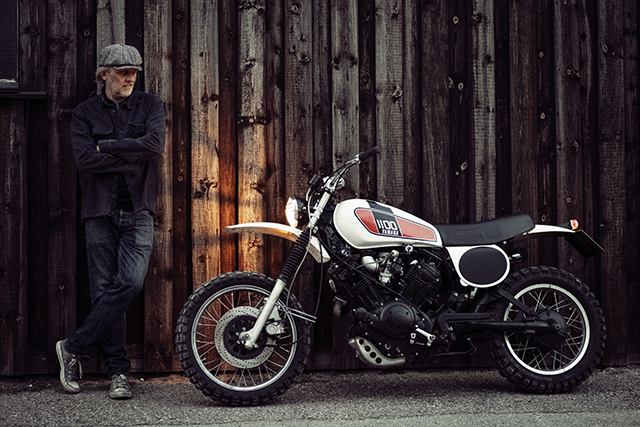