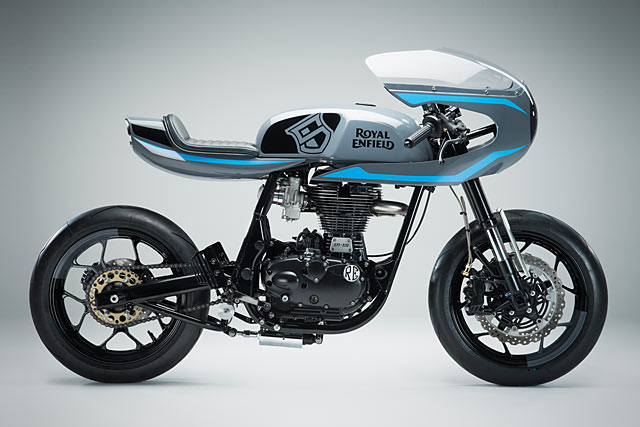 In a strange kind of synchronicity, Brothers Rahul and Birju Sinroja were 16 years old when their family upped and moved them from India to England. Now they’re producing custom Indian motorcycles for Brits. The first of which is this incredible Royal Enfield Continental GT dubbed the ‘Surf Racer’ – one of a pair of Enfield specials produced for the Wheels and Waves festival. But let’s rewind a little, as this bike is as much a story of the builders as it is the motorcycle itself. Born in a small town in India, Rahul and Birju grew up running around the feet of their parents who owned a small manufacturing workshop. They spent their spare time running rampant around lathes and machinery, but outside in the streets their main interest keeping trundling past. ‘In India motorcycles are just a daily requirement,’ Rahul says, ‘It’s not a form of hobby or joy – it’s merely transport.’ Depressing as that may sound to us in the west, even from a young age motorcycling meant something more to the pair. ‘For me it was always exciting, something that made me smile whenever I heard a bike go past.’ So at the age of ten he pinched his brother’s bike for a zap around the block and the bug stuck. Years later they moved to England, and after blur of study and an engineering degrees, the duo found themselves enamoured with motorcycles again. In 2015 they kicked off their own workshop, won a smattering of awards and then they found themselves being approached by Royal Enfield to make a pair of custom bikes for the ‘Wheels and Waves’ festival that straddles the Southern border of France and Spain.

[superquote]“We wanted to create a sleek, fast looking bike and see how far we can push the Continental GT”.[/superquote] ‘We wanted to create a sleek, fast looking bike and see how far we can push the Continental GT,’ Rahul says. ‘The bike had to look modern with the hint of classic – a sort of vision for the future of Royal Enfield’. To help them along, Royal Enfield provided a brand new motorcycle. ‘It was fresh from the factory but we decided to strip it all way to the crank to add more go to the engine and truly build a genuine cafe racer that doesn’t only look great but also goes faster – which was the whole idea of a cafe racer’.

First up was the bodywork. ‘The fairing was bought as a full body fairing and then after huge amount of modification we finally managed to get a shape that fitted perfectly,’ Rahul says. At the rear, the tail section came from a stock of mixed sheet metal that was bent, hammered and caressed into shape, with some parts coming from a Honda CB550 tank the boys had lying around in the shop.

A huge part of the ultra clean lines of the bike is due to the exhaust, which runs up and through the tail-piece. It took no small amount of work to get right, especially making sure the exhaust didn’t melt or distort the body work. It was made from 3 meters of stainless tube that was chopped and welded until it hugged the underside perfectly. And there’s a neat little touch inside. ‘We ended up using a piece of original CAT as a mesh in the end which glows red when hot,’ Rahul says, ‘It gives it a super cool look which appeals the child inside everyone. It reminds me of a jet. Nobody hates jets.’ The mag wheels come from Kawasaki at the front and the rear is a Yamaha unit, with the team wanting to make the bike look more modern than the standard wire wheel units allow. USD Kawasaki forks were installed, on a custom billet aluminium yoke produced by Fastec Custom Racing, while the rear swingarm was extensively modified to take a pull-style Softail shock absorber. Now it wouldn’t be a proper cafe without some engine modifications. To that end the Surf Racer was stripped down and modified with high lift cams and had the head ported. Interestingly, the standard EFI componentry was ditched in favour of a Dellorto carburetor, allowing Rahul and Birju to tune the bike more easily. The trimming and cutting and crafting of a new harness was done by the team at Towzatronics. The end result of all this hard work is a bike that looks amazing and far more polished and well thought out than any other workshop of this vintage usually produces. The lines of the bike are incredible, it’s littered with gorgeous details and all topped off in a carefully considered palette of greys and blues laid down by Black Shuck Kustom. And the team, understandably, is blown away by the result. ‘The bike has overwhelmed us,’ Rahul says. ‘Even with all the renders up front we weren’t expecting the bike to be so perfect’. Stay tuned to see what the brothers from Sinroja come out with next!