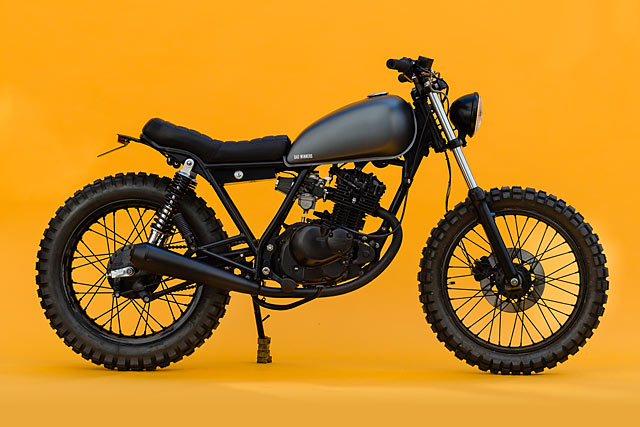 Big bikes are cool. You’d be crazy to try and cut it any other way. But as in the world of knives, sometimes a scalpel is preferable to a machete. Just ask your local brain surgeon. And if there was ever a two-wheeled, internally combustible scalpel, this is it. France’s Bad Winners has taken the decidedly meek and mild Suzuki GN125 and turned it into a scrambler that’s always sharp and ready for the job at hand. A cut above? Try a cut above and beyond. Walid from the shop says that Bad Winners has been producing eye-catching bikes for a few years now, and notes that it has also managed to establish a name in the custom bike scene in Europe. “We are now trying our hand at creating a series of bikes that will work for the more casual or newer European rider looking for style and performance on their daily commute or weekend run-about. They will be based on this MY 2000 Suzuki GN 125 from 2000.” The project is based on Bad Winner’s observation that many continental city riders want something more than just a scooter, which in many cases is all they have to choose from.

“We think there’s an opportunity here, so we want to provide an alternative for them by creating a reliable, kick-ass-looking bike that will withstand city life while also inspiring their owners.” Of course there will be some doubters, but it would seem that the numerous Chinese brands now making in-roads in this market prove that there is some real potential here. And by having a 125cc engine in the build, the bike really opens up the market for people who don’t have a motorcycle license (some European countries allow small capacity bikes to be used licence-free) but have always wanted to cruise on a real, engine-in-frame bike. The GN comes equipped with a choice selection of Motogadget products, including their Tiny speedo, M-Unit Control Box and some M-Switch buttons. Other tasty mods include the simplified electrical wiring, the handmade leather seat and an engine rebuild that will ensure you’ll never miss out on your regular café and/or discotheque appointments.

“We fitted a classic megaphone exhaust,” says Walid. “And there’s also a Bates-style headlight, Shin Yo brake light with bespoke holder, LED turn signals, new fenders, ‘bars and grips.” As with all Bad Winners bikes, the team has put a bunch of hand fabrication work in there as well. Then all the new parts, along with those remaining from Suzuki’s original handiwork, were sent for powder coating.

And for those who do choose to purchase one, the Bad Winners team are open to personal preferences for other tank, tyre and paint options. We can’t help but think that the original Suzuki GN125 red with silver pin striping would look tré cool.

“Of course we like the scrambler’s features and looks first and foremost, but for us a close second is what they offer riders. Before the GN, we could only offer our customers builds for the more experienced, serious riders. We’re excited, because now that’s all going to change.” With the tyres you see here, the scrambler would be pretty much perfect for that French country town where a typical day could easily include both on and off-road runs. But wherever you live, Walid is in no doubt of the Suzuki’s true calling. “It may be small, but it’s still a very potent weapon,” he says with a smile.