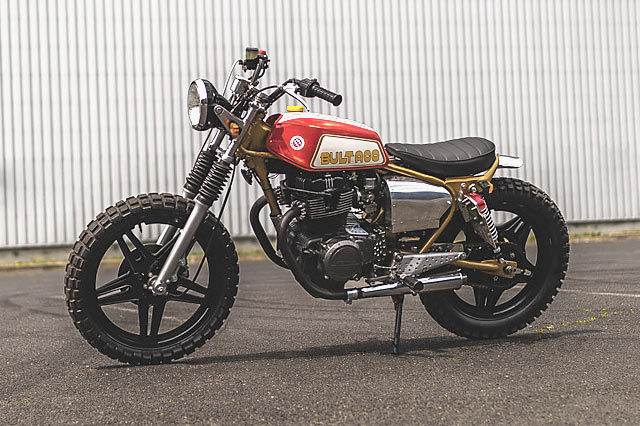 Hot on the heels of their CB250 from a few weeks ago, Poland’s T. Jasin Motorcycles have just rocked up with another killer Honda – this time it’s an ‘83 CB400 that’s clearly just been to Spain for its summer holidays. Deciding that the Bultaco MX livery was the perfect vibe for this Comstar’d and knobby’d little champ, the Japan-loving Jasin brothers have left the thing co-branded to add a little frisson to the mix. And boy, don’t they mix well? Warsaw. The name conjures up images of a grey, post-communist city that’s had the proverbial stuffing kicked out of it over the past 100 years. It’d be the last place you’d go for a holiday, right? Well, contrary to the stereotypes, Warsaw in 2017 is a thriving city that wears its tumultuous past as a badge of honour. It’s jarring mix of restored gothic, communist concrete and modern sheen make it one of Eastern Europe’s most interesting cities. The booming custom bike scene is a real testament to just how far it’s come and this eccentric mash-up of a bike is just the kind of creation we’d expect the city to produce. “It’s a Honda CB 400 twin from 1983,” says T. Jasin. “Again, we’re showing our love of Honda’s bikes by choosing another of their back catalogue to build with”. But clearly, Honda isn’t the only company that’s getting some love here. “We wanted to add a little Bultaco to the flat tracker inspiration we had chosen to go with”. While a Honda logo was the duo’s initial design idea, the thought of the Bultaco visuals added so much wow they decided to keep it. Again the two ventured into Poland’s non-touristy rural surrounds to source the donor bike. While you’d guess that most of the country’s barn finds would turn up less than desirable Russian basket cases, it’s clearly not always the case. Countless years of substandard transport, of both the two and four-wheeled variety, saw a wave of Europe’s second-hand vehicles flood East after the collapse of communism. Clearly the locals had realised that daily mechanical disasters weren’t necessarily a fact of life. “As with all our builds, we prefer to tear the bikes down to their component parts before we start”, say the boys. As any shop that’s been in the game for a while will tell you, short of using brand spanking new donor bikes, it’s the only way you can offer your customers a bike that you know will stand the test of time. Everything else is just guesswork.

“We then started the build-up. The main components used included some Continental dirt tires, an old red MX tank with a new Bultaco logo, a matching gold frame, a bespoke padded seat, some high ‘bars and some low-key twin exhausts”. “Every new part of the tracker was hand-made, but the biggest job of all was probably the polished aluminium side fairings. That and making the bike street legal. That part’s always a challenge, as it often forces you to go against what you’d imagined in your head”. “For this build, the hardest part was probably cleaning and grinding the Honda’s frame. It may not seem like a major deal in the scheme of things, but it presented us with a few challenges that took a lot more time than expected,” say the boys, with a weary tone. [superquote]“The best part is riding it. There’s something very ‘swagger’ about it”.[/superquote] “The best part of this tracker is riding it. There’s something very ‘swagger’ about it. It just makes you feel cool to pilot it. Maybe it’s the colour scheme or the riding position, but you almost feel like Steve McQueen when you’re on it”. McQueen, you say? We’ll take 12. Now where’s our groupies?