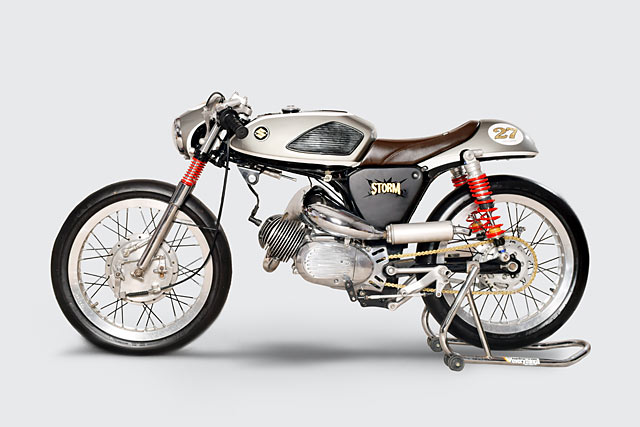 While most motorcycle racing has its origins in Europe and North America one form of the sport is so quintessentially Australian it started life in New Zealand; just like Phar Lap and Russell Crowe. The humble Bucket Racer was a cheap way to get your need for speed and gets its name because the donor bikes were considered buckets of shit. Decades on and the style, like everything else, has gone global. But to find one of the best examples we’ve ever seen, we had to travel to Jombang, Indonesia. There Dana Prasetya and his crew at GDZH Custom Cycle have crafted this stunning Suzuki A100 racer that smokes up a ‘Storm’! 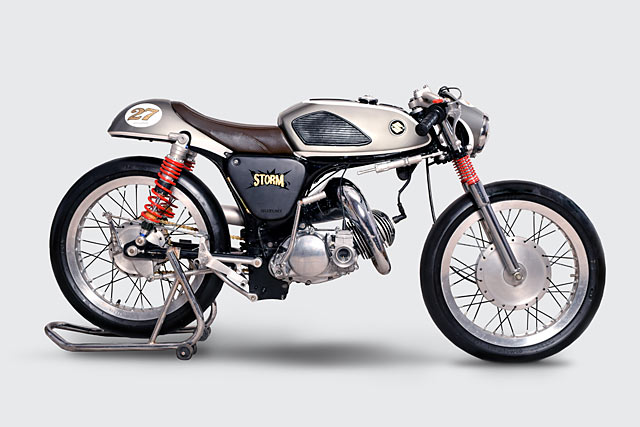 It was supposed to be a bargain way to go racing, buy a cheap commuter bike with a tiny engine, strip off the road gear and thrash it amongst a pack of up to sixty others on the circuit. But once the competitive juices start to flow the need to win takes over and would you believe it, a global arms race broke out to make sub 10hp bikes, race winning weapons. Thankfully common sense eventually prevailed and budgets were reined in. But some of the special parts from the glory years remain and a few even made their way to Indonesia. 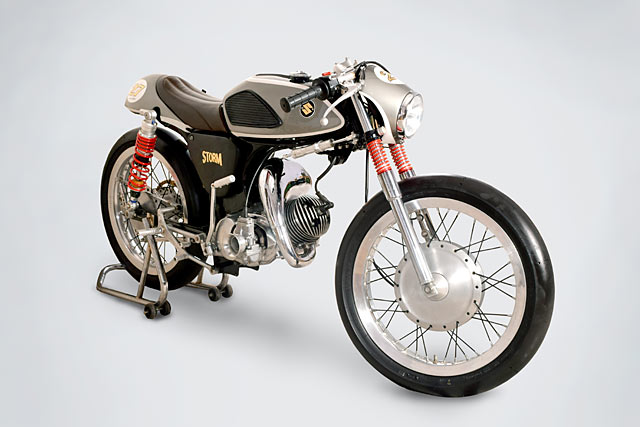 There a friend of Dana’s by the name of David brought his little A100 into GDZH for a basic restoration and paint job. But like those racers of old, once he returned to collect his restored machine his eyes started to sparkle as he saw the amazing custom creations that were packed into the workshop. David had a simple question, “Can you custom this A100, like other custom bikes?” Dana who has been designing and building motorcycles since he was in high school had an even shorter reply, “of course I can!” and they commenced a discussion that would result in the machine that sits before you.

After a mix of examining the bikes frame and basic style, and scouring the internet for inspiration, the pair agreed that the best approach was to build a cafe bike with a serious racer attitude. The freshly restored Suzuki was pulled apart once again and Dana envisioned a bike that looked like the “shape of a bullet moving at high speed”. To achieve this the first change was to swap the fuel tank out for one from an earlier Suzuki A, that is more aggressive in nature and with lines that don’t say cheap old commuter. But the rest of the bodywork to accentuate the look are all hand formed at GDZH.

[superquote]“Dana envisioned a bike that looked like the shape of a bullet moving at high speed.”[/superquote] 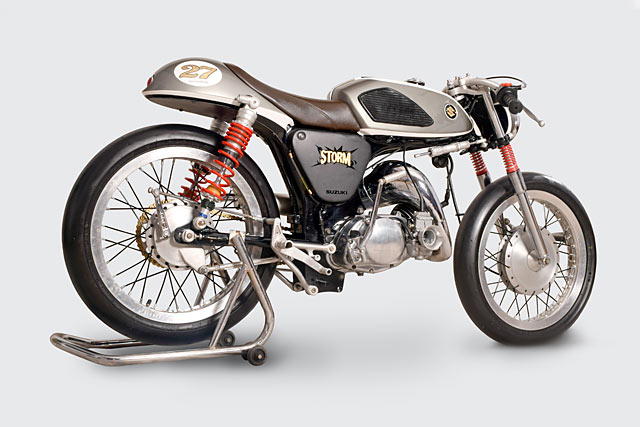 Starting at the front Dana mounted the small round headlight in close to the trees and then began to hand form the cowl. The result is a stunning custom piece that gives the desired speeding bullet effect while setting up the shape for the rear. The tail section was one of the hardest parts of the build, with the emphasis on creating smooth transitions from every surface but still finishing out in that signature racer hump. From every angle it works perfectly and Dana went the extra mile, forming in reliefs for shock mounts and shaping a brilliant flush mounted tail light.

To show off all the hard work the slick paint job was laid down in-house with the main colour broken up with accents of white and black. With the all important race number, ‘Storm’ name graphic and Suzuki decals done in gold. The seat is far more luxurious than anything you’ll find at a race track, with the natural coloured leather contouring brilliantly with the bodyworks lines. While miraculously the bike is kept street legal without taking anything away from the racer looks with the addition of four tiny LED indicators. 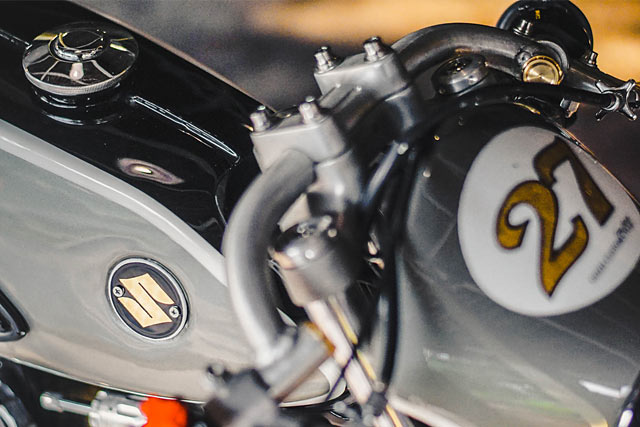 But all of the visual goodies just provide the platform for the screaming little 98cc, rotary disc valve, two stroke that is its beating heart. The top half of the engine is a piece of vintage racing kit, with the owner informing us its from Italian firm Parilla. Suzuki made factory racing parts too, but rather than try and track them down Dana wanted to make his own. The flat slide carby has an all new mount that took three tries before the welds were up to GDZH standard. While the polished up expansion chamber and race muffler look as good as they sound screaming along Jombang’s streets. 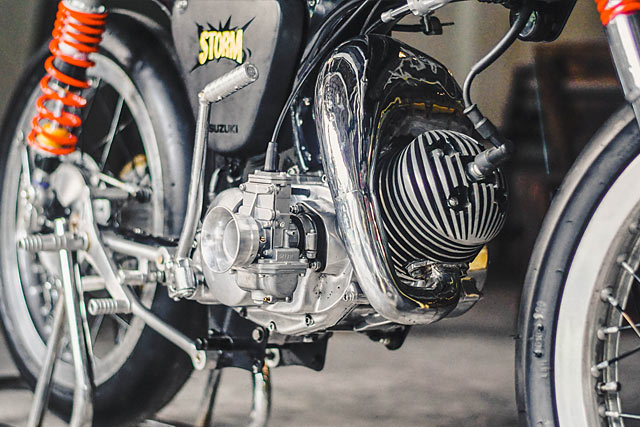 To make sure the bike handled as well as it went the front suspension has been rebuilt and lowered 4cm. A set of adjustable shocks handle the rear and the now exposed front springs were painted red to match. To help the bike turn more sharply the wheelbase has been given a chop too, with Dana taking 3cm out of the swingarm before re-welding it for extra strength. The factory braking would never suffice, so to keep the vintage look a Honda CB front drum has been adapted to fit with lightweight rims laced up front and rear. The slicks give a tip of the cap to the bikes racing heritage but can be changed out for treads when required. 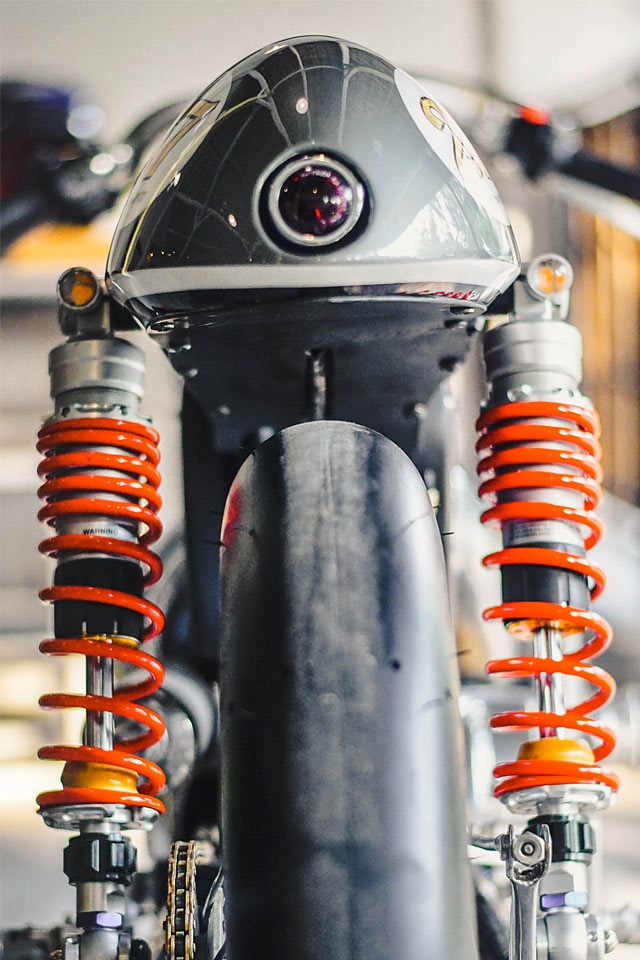 With an old frame, short wheel base and double the power the addition of a steering damper does its best to reduce those sphincter tightening moments. While the rearsets were also made at GDZH with all the rods and mechanisms designed to work precisely for this build rather than pick up generic parts. The finishing touch is the set of clubman bars and the can do attitude in Indonesia means these are built in house as well. And when David returned for a second time to collect his little A100 the choice to go from basic resto to full custom special had proven a wise choice. His neighbours might not love the two stroke scream but the motorcycle community has already rewarded the efforts with a growing cabinet of trophies!