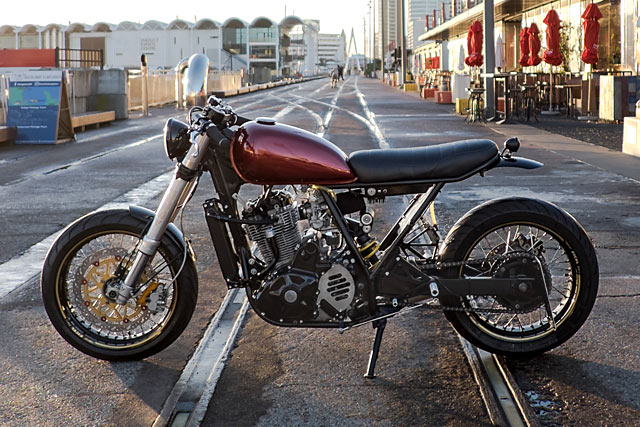 It’s the unwritten rule of all sheds. For every few complete bikes you stash in them, you also should have one that’s been completely disassembled and stuffed into old cardboard boxes. Extra points will be awarded for nuts and bolts in glass jars, underpants stuffed into intake and exhaust ports and parts covered with old towels wreaking of WD-40. Which is exactly how New Zealand mechanical engineer Mike Dodd first found this NZ$600 ‘92 Suzuki DR650. But it wasn’t destined to stay that way for long… “I’m a 30-year-old mechanical engineer living in Auckland, New Zealand,” says Mike, by way of an introduction. “I’ve only really been into bikes for the past 4 years, but I have been tinkering with old cars and building things for as long as I can remember. I have made a few smaller bikes over the last couple of years, but this is really my first ‘full size bike’ build.” Mike’s lucky enough to work in a place that has a well-equipped machine shop, so he was able to do pretty much all aspects of the build himself – even though it often meant learning the skills to do the work first. “The donor bike was a 1992 Suzuki DR650. It’s a big single for those who don’t know, but now I guess it’s mostly a cafe racer with a couple of modern twists thrown in. I don’t really have a name for it, although I did call it plenty of names while I was building it – none of which I’ll repeat here.”

Mike found it on his local internet classifieds as a complete basket (or should that be box?) case. When he picked it up, it was literally just an engine, a frame and 3 boxes of assorted parts which he proceeded to jam into the back of his old BMW wagon. [superquote]“Then this Suzuki came up for $600, so I thought I’d give it a go. Little did I know what I was getting myself in for!”[/superquote]

“I wanted to build a nice, skinny, light cafe to do the daily duties of getting me to and from work through Auckland traffic while still having enough ‘get up and go’ to be a bit of weekend fun on the coastal and semi-rural roads close to where I live. I looked at all the regular single or twin cylinder UJM candidates and finding them all pretty expensive here in New Zealand. Then this Suzuki came up for $600 so I thought I’d give it a go. Little did I know what I was getting myself in for! Then about a month after I bought it, Diamond Atelier released their DA#5 which was a big inspiration.” “The first thing I did was to get the cafe stance I wanted. As it was a dirtbike, it didn’t really have the straight backbone I was looking for. The RMZ250 front end came with the bike, so I got that fitted and then I shortened the forks by 150mm. The hubs were laced to 17″ Motard rims and I fitted a GSXR750 rear shock along with the GN250 tank.

Next I modded the Suzuki’s subframe so it would work with the stance and tank lines. I then made all the custom parts that I needed, including the seat and seat pan, rearsets, the switch-blocks and the sprocket cover. For the rear guard, I chopped the centre section out of a Honda Shadow unit.” Then Mike stripped the engine and rebuilt it from the bottom end up, replacing all necessary bearings, gaskets, seals and rings. A local performance shop worked their magic on the head by smoothing out the ports and regrinding the cam. To take full advantage of this, a Mikuni TM-40 flat-slide pumper carb was bolted on for a bit more down low punch. “I then fabricated a full stainless exhaust with a custom stainless muffler to cap it off,” says Mike.

Everything was then stripped and either painted or powder coated. Following reassembly Mr Dodd rewired the bike from scratch, as the original loom came to him looking very much like a bird’s nest stuffed unceremoniously into a shoe box. “I’d say the biggest challenges came with the cafe racer’s smaller details. Since there were no bolt on parts for what I was doing, most of them had to be custom-made – and most times they were made more than once. A lot of the mounting brackets took three or four iterations until I was happy with how things like the oil cooler or the muffler were sitting. Even simple things, like fitting a low mounted front guard onto a set of USD dirt forks with no mounting points, became a challenge. But it only made me come up with more creative solutions.”

“The Suzuki is really fun to ride. It handles well and it gets away from the lights pretty smartly with the new carb and engine work. Also, I really like how all the parts of the bike work together as a whole and nothing looks too out-of-place or ‘stuck on’. And it’s really awesome seeing people’s reactions when they realise what the original donor bike was.” Glad we weren’t the only ones, then.