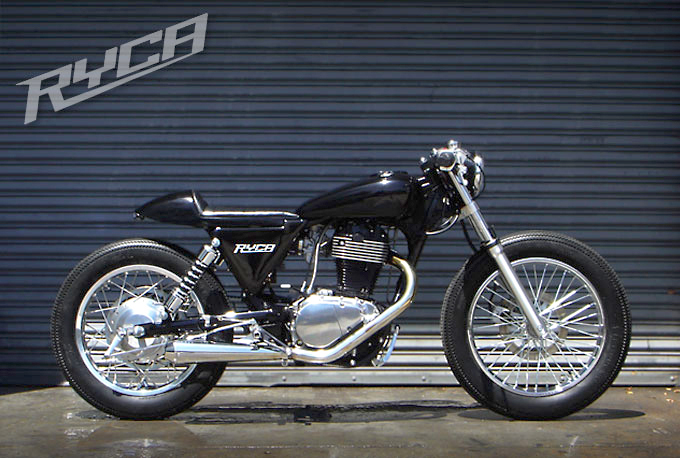 As far as donor bikes go, the humble Suzuki S40 Savage probably isn’t on top of many peoples list. Casey Stevenson had trouble finding a suitable bike for his Café Racer project but eventually stumbled upon the S40 and decided to turn this ‘ugly duckling’ into a very sexy swan. “I was in the market for a new motorcycle and wanted a lightweight thumper to get around the streets of L.A. I quickly discovered the lack of available options, so I started working on a new design. I was imagining a motorcycle with a Japanese engine and classic cafe styling, but more sleek and modern than the single cylinder customs based on old bikes that are popular at the moment. I discovered my ultimate thumper café racer hidden inside a bike known as the Suzuki S40 (aka the Savage). They have been around for over 20 years and are still available brand new. The custom parts and accessories were designed to avoid any major modifications to the frame or engine, which allows anyone with basic tools to build their own bike from kit components. The end result is a machine that is simple, fun, and efficient.” We take our helmets off to Casey who has done a fab job building a slick café racer from this unpopular model which most people would overlook for the more popular XS650 or SR400. It turned out so well Casey is now going to do a small production run of these bikes out of his shop in Los Angeles, as well as offer the custom parts as a kit. If you are interested, you can view more pics and prices on his website Ryca Motors.