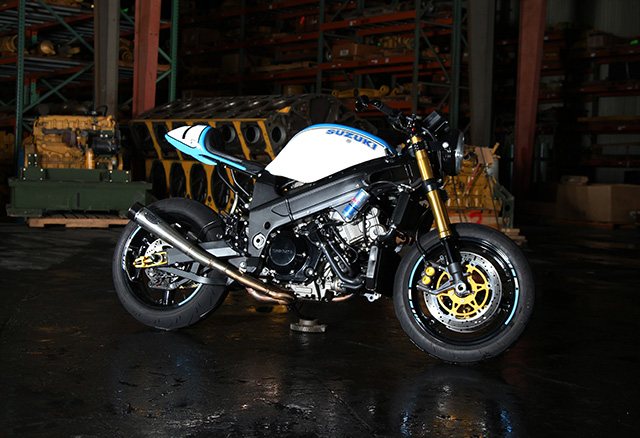 Incredibly, in stock trim the Suzuki TL1000R is as ugly as it is torquey. With its rounded, fat fairing and ungainly looking seat, in the bike symbolizes much of what was wrong with the late 90s – along with Balkan ethnic cleansing, mass flooding deaths in China and the rise of ska music. Nick O’Kane – powersports sales manager at K&N air filters – saw the potential hidden underneath all the bulbous plastic of a 2002 model TL and put together this gorgeous custom that looks great, handles beautifully and has the powerplant to match. Powered by the extremely capable 996cc V-twin engine, the TL was released in 1998 to tackle the incredible Ducati 916. But, plagued by average race results and mediocre sales figures the heavy, awkwardly-handling TL was pulled from World Superbikes after just one year and Suzuki went back to what they did best – producing bland inline fours. Despite this less-than-stellar showing, over the years the TL has developed a dedicated fanbase who love the affordable, reliable horsepower that the Suzuki offers. But they’ll be the first people to admit the TL does have some problems. The main issue with the TL1000 is the much-vaunted rear rotary damper. The fat, square little unit combined spring and dampening functions, designed to make the best use of the limited space at the rear of the v-twin engine. A great concept – except the damper quickly overheated and heavy braking would lead to pretty serious cases of bucking, chattering and death. Nick was quick to replace the rotary damper with a Hyper-Pro unit that vastly improved the handling. To match the rear some GSXR1000 forks were installed in the stock triple clamps. R6 calipers, EBC pads and stainless Goodridge brake lines round out the impressive list of suspension modifications that will stop the curious sensation TL owners often experience – of the bike trying to spit its owner off around corners. And it sounds like that’s what happened to Nick’s 2002 TL1000R. Picked up as a wreck for $800 the bike was in very rough condition. It had a busted frame, it was covered in dust and had scratched and broken plastics. To tidy it up the swingarm, wheels and frame were powdercoated and the gauge mount, seat pan and top triple tree were modified in a backyard workshop. Once the fairings were removed the wiring loom of the fuel-injected Suzuki had to be trimmed back – all 400 miles of it. After an agonizing few days of cutting and soldering Nick was able to fit most of the stock connectors into the Ducati Monster headlight and the remaining wires tucked up alongside the stock airbox. The gorgeous exhausts were provided by Roland Sands Design, air filter supplied by K&N, a power commander was fitted and the bike spent some time on the dyno to ensure the TL’s engine was drumming along comfortably. The Wes Cooley race replica paint scheme came to life through MotoGP Werks in California – and the matching patterns on the rims are a nice touch. The chequered solo seat was completed by Saddleman and there’s a myriad of aftermarket parts here too – RSD handlebars, PSR grips, gas cap and levers and VooDoo rearsets.

Nick’s created a modern, reliable bike that was affordable to build, looks tidy as hell and, with its excellent engine and new suspension, would be fantastic to ride.