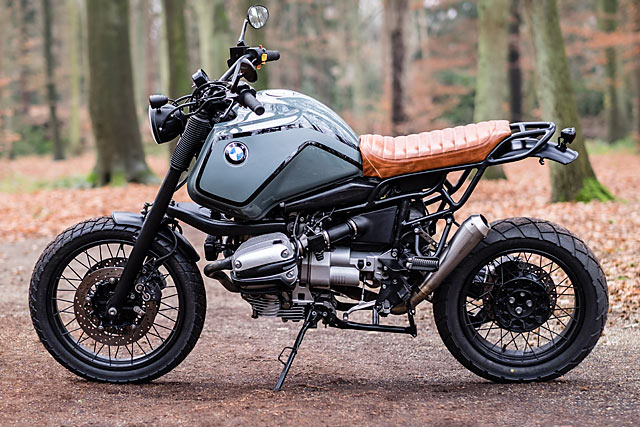 For most mere mortals the taller they are, the better life is. Tall people are statistically proven to be more likely to land jobs, attract a suitable mate and impose their will on others. But as a biker, I see things quite differently. I see a really tall person in public and I think quietly to myself, “I’m glad I’m not that tall. Riding a bike would be impossible…” Or maybe that’s just me. Whatever the case, it just so happens that today’s feature build grew out of just such a thought. Take one very tall guy called ‘Bobeus’, add a BMW R1100GS and the Netherland’s Moto Adonis, and you can bet the end result will be sky-high. “Hello again Pipeburn,” says Moto Adonis’ Daan Borsje from Roosendaal in Netherland’s  southern nether regions. “This time we’ve produced a rather special BMW, and one that were really quite proud of. Our customer, a rather tall tattoo artist named Bobeus came to us wanting to build something that would suit his height and give him a little more comfort than his current ride, a rather cramped old CB750. We agreed that it was probably time for something bigger and better, and we got to work.”

Rolling around potential donor bikes in he is head, Daan kept on coming back to the legendary BMW GS series; yes it was a good fit for his giant-like frame but it also gave Daan the opportunity to build something totally different from anything Moto Adonis had done before.

“Bobeus bought himself a decent 1997 BMW R1100GS with quite low miles and we started on the design,” says Daan. “After talking to Bobeus, we decided to make the frame a key feature for this scrambler.” And with the bike already sporting a fairly unique front Telelever set-up direct from Bavaria, somehow the idea didn’t seem so far-fetched.

“It isn’t easy, but we always try to listen to the demands of the customer – after all it’s his money and his dream bike we’re building. So together with the tattoo artist, we designed the rear frame with all his characteristic, tattoo-proven curves,” says Daan. And that’s no lip service. If you check out the guy’s work, you’ll see the similarities. “We also worked together on a new seat pan design and a stylish electrics box.” To complete the bike’s rear, Zutphen’s Miller Custom Upholstery made the bike a brand spankin’ new leather seat that perfectly fits the bike’s new tail. “Then to finish the rear, we hand-made a fender and then we added a Bates-style brake light and some nice, small blinkers,” says Daan.

“At the front we replaced the good old ‘duck face’ with a smaller, cleaner fender and headlight combo,” he says. Then on top of the headlight he fitted a blindness-inducing foglight that is apparently “as bright as looking straight in the sun.” Sounds painfully cool, Daan. The final tweaks here included some new handmade light brackets with integrated blinkers and replacing the factory dial with a nice, small, two-in-one Acewell unit. With the hard work all but done, it was time for the finishing touches. Daan decided to give the whole frame, front forks and rims a matt black powder coated finish. Then the tank was painted in a combo gloss and matt finish with a very military-looking shade of blue grey. “The exhaust was upgraded with a stainless steel muffler from Shark, along with part of the exhaust pipe. Yes, it sounds great.”

Then all that was left was some new kicks. “After putting it all together, we fitted a set of Bridgestone Trail Wings and a new cross handlebar with Biltwell grips. Then we stood back and looked.” With smiles on their faces, Daan and the team decided that this bike was ready for its first test ride. And so off they went to their local forest. Daan reports that the bike’s off-road manners are as impeccable as its on-road ones, and with BMW’s famous front-end still fronting their top shelf off-road machines, it’s really no surprise at all. What a damn nice scrambler. To tell you the truth, we’re a little jealous of Bobeus. On second thoughts, we think we might need to test the bike for ourselves. We’ll meet you in the forest, Daan. Don’t tell anyone you’re coming. We’ll be the guys with the rope and the bottle of chloroform. See you soon.