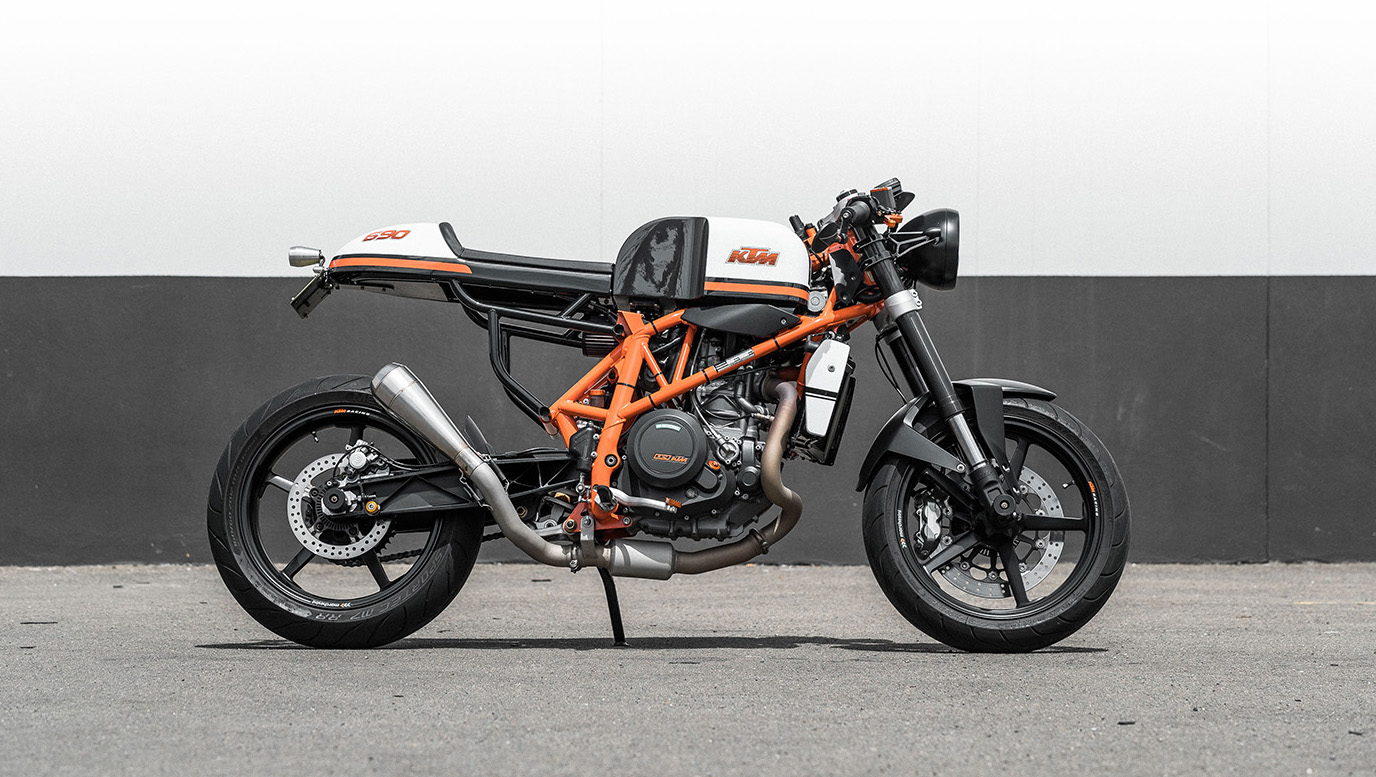 In a year that has thrown up enormous challenges for everyone around the world, fans of KTM have had plenty to smile about. Having made their MotoGP debut in the 2017 season they’ve tasted the ultimate success in just a few short years with a win apiece for the factory and satellite outfits already in 2020. Always a manufacturer that punches above their weight, the Austrian outfit offers bikes that are a blast to ride and built tough. The problem is, they all look the same and if you want to stand out in the KTM crowd boy you have to put in the work. Well, Australia’s James Campbell has been hard at it and his killer KTM 690 Cafe Racer now has the visual appeal to match the fun filled performance.

We first met James last year when we featured his Honda CBR600RR that he gave the retro treatment to, for a unique looking ride with bucketloads of get up and go. But the KTM actually began earlier and was his first full build and with such unique machines to the custom scene, you can never accuse him of taking the easy way out. But the formula makes sense, take a motorcycle that already has incredible performance and then give it the look you desire. It’s a hell of a lot easier than trying to make an old commuter bike genuinely fast; he’s definitely onto something.

As mentioned however the KTM range not only look the same but share the orange, black and white colour palette across the range. From 50m away your non-biker friends are going to struggle to tell the difference between a budget 125 Duke or a bad to the bone big buck 1290 Super Duke. While most go the bolt-on route, James had other ideas, although that was not always the plan. “I originally bought the 690 Duke because its a very fun bike to ride, I had no intention of modifying it. But the budget wouldn’t allow for a second project bike so I decided to try modding the KTM.”

So to get an idea of what he was working with the Duke was stripped down, photos taken and a design slowly pieced together. To give him a base to build off the rear subframe would have to go, pointing aggressively skyward the stock unit isn’t at all conducive to the cafe’d look. The new unit is a work of art, built from high-grade Chromoly it attaches via the factory mounts. Finished out in black it has an OEM level of finish and provides the perfect contrast to the orange mainframe. Two lateral supports keep it solid as a rock and a tray under the hump provides the perfect place to store the battery.

Then came the tail and tank, “Once I had a pretty solid design I mocked them up with foam on the bike, the tail section I was able to just fiberglass over the foam to make the seat which wasn’t very hard,” explains James. But the tank would not be so easy, a perimeter trellis frame is always a challenge to work with and the fuel pump and sender would have to remain inside. A total of ten separate pieces were cut from alloy and meticulously tacked together. Before the final unit had the filler cap reincorporated, fully tig welded and it could be pressure tested to ensure there were no leaks.

With all the metalwork done it was time to sort out the paint and there was only one place to go. Sam Muldoon at Colourfuel is a star of the Australian scene and his work has been sported by many a show winning ride. The KTM colours were used, but with the emphasis on the black and white the Duke takes on a style of its own. While the hand-painted KTM logos with flawless detail and the bold pinstripes finish out the job. To match the seat had to be foamed up and covered, with the guys at Bad Arse Trim Co. taking care of business with the perfect cafe styled fit-out.

“Clip-on handlebars and solo bucket headlight were added to keep with the cafe racer styling, but can be easily converted back to tracker bars for a more upright seating position,” James tells us. But the headlight required an LED upgrade with the vibrations of the big single blowing bulbs. The taillight is a special touch to the bike, made on the lathe by James it gives the bike a classic piece that doesn’t look out of place. While the rest of the controls are all about maximising the riding potential, Sato racing rearsets, adjustable levers, and a Brembo radial master are all business.

But the heart of the KTM couldn’t be forgotten and until you ride one it’s almost impossible to describe the smile-inducing nature of the high compression thumping single. To maximise the sound the big factory rear can was removed and a sweet new Tyga Maggot muffler added. With the factory airbox ditched in the process of making the new rear, a K&N filter is bolted in place and lets you hear the motor induction sound roar.

To keep an eye on everything the factory instrument cluster is retained, but neatly mounted on a piece of carbon fibre hard against the top clamp. The bike took 12months to complete and the results speak for themselves having first debuted at the epic Throttle Roll show. James plans to keep the KTM forever and given “It’s a hoot to ride, loves time on the back wheel and being a general hoon,” why wouldn’t he.