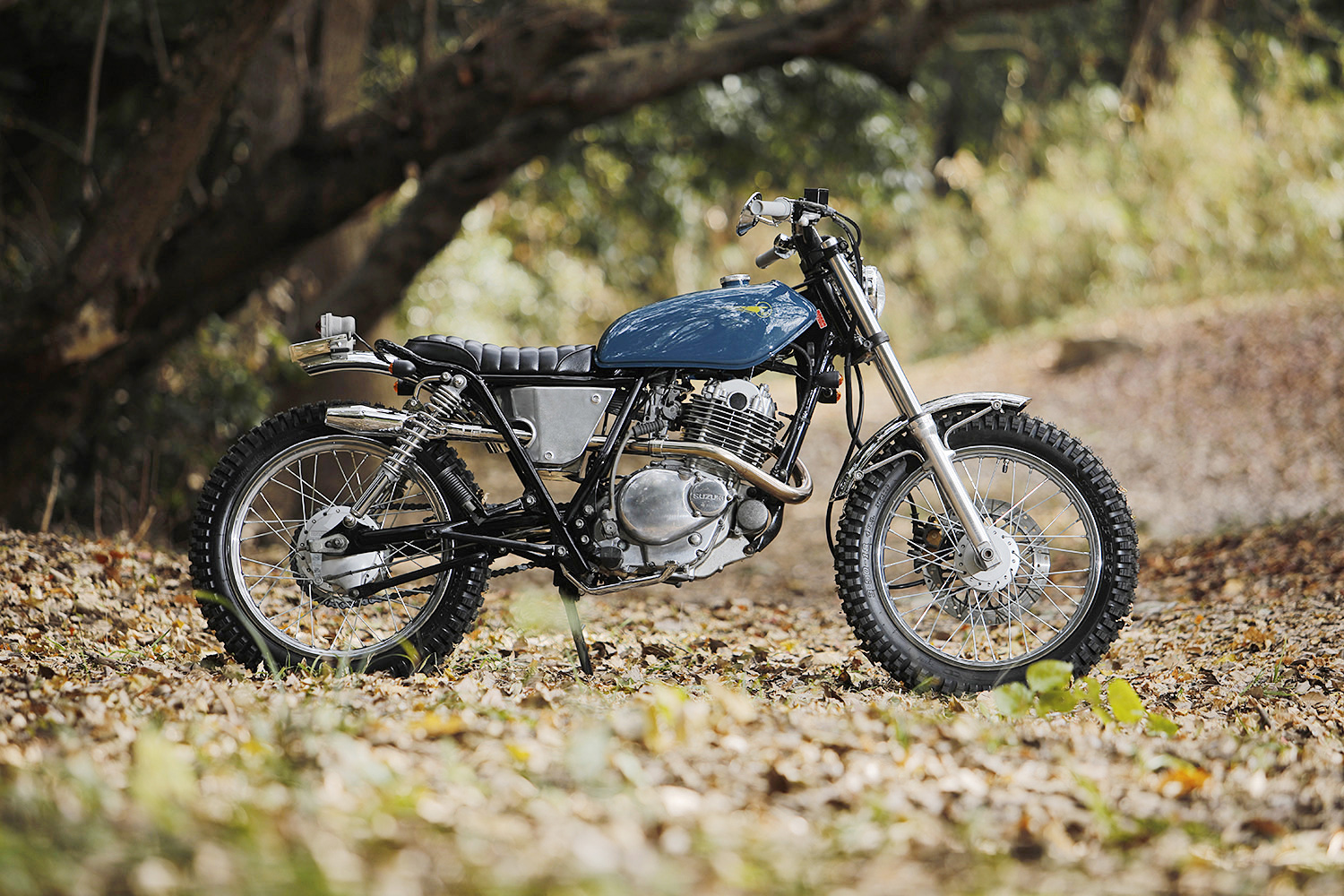 They say you can’t have your cake and eat it too but if you head to the port of Hiroshima, Japan, and enter a small nondescript building, you can literally have it all. It is here you will find the headquarters of Heiwa Motorcycles, the place where the legend of the custom bike scene Kengo Kimura plies his trade. But not only is he the man responsible for the machines that take home the top trophies at the world’s biggest shows, he also loves nothing more than taking a cheap commuter bike and giving it his custom touch. All this leaves one very lucky customer with a stunning Suzuki ST250 Scrambler that has the touch of the master with the ability to make it through the mud.

This particular ST250 is a 2005 model, but it really doesn’t matter as they were all the same, a small, universal Japanese motorcycle styled, single-cylinder that was given many names in many markets but designed to be cheap and commuter friendly. Other than a very clever coating on the cylinder wall, the bike is as low tech and as entry-level as it gets from the Suzuki brand. It’s this ’60s like simplicity, however, that allows Kimura-san to leave his mark.

Going for a stripped-down British Scrambler style, the open ended rear subframe of the stock bike with its large seat support bracket has been cut off. In its place, a new tube was bent up to fashion an upswept style rear hoop that not only gives more pleasing lines but provides for a seat backstop and the mounting of the fender in a higher position for off-road work. A few tabs removed and a lick of chassis black paint and the foundations were ready.

With the stock tank being a rather unattractive piece, the normal solution would be to find a vintage unit to fit in its place. But Kimura-san just doesn’t operate that way and instead has used one of his own creations, slim and slender to allow for full travel of the bars without interference, it has the look of a Spanish trial bike tank from the early ’70s. Painting duties were handled by N2 AUTO, who laid down the understated Blue-Grey colour and then applied a small Heiwa logo in Yellow. To complement the new metal a handmade seat unit has been wrapped in leather in the traditional tuck and roll design.

With useability of high importance on this build, a set of the company’s own hand-rolled fenders in a chrome finish take pride of place at each end of the bike. But even here the high level of fabrication skill is shown off, with ultra neat custom struts securing the front unit to the forks. Then Kimura-san used one of a motorbikes most simple features to show off his extraordinary talent. Wanting to keep the exhaust high and close to the frame in proper Scrambler style, rather than worry about ugly wrap or shields to protect the rider’s leg, he snaked the exhaust through the custom side covers that also double as the electrics box.

The exhaust itself is the major mechanical modification to the single-cylinder 249cc engine, giving it the type of sound such a bike truly deserves. Fabricated from stainless steel the single pipe navigates the down tube before running rearward as previously described and then barking out of a reverse cone chrome muffler. The inlet side sees the big plastic airbox tossed aside and replaced with a small pod filter. Before all of the electrics were pulled out and a new loom created from scratch for an ultra neat finish.

Lighting might seem a small aspect of any build, but its become part of the Heiwa signature and one of their MC Original tail light units sits proudly on the rear fender. At the front of the bike on custom mounts is a vintage fog light, while the indicators are blacked out bullet-styled items. Again avoiding the temptation to just grab a part off the shelf, the bars are hand bent and built to suit the rider and are finished off with a set of Renthal grips. Before a single mirror and tiny mechanically driven speedo were added to ensure everything was road legal.

Furthering taking care of the ergonomics are the custom pegs that are then fitted with standard style rubbers, little touches that only the owner can truly appreciate. Before the chromed rims with stainless spokes are treated to a set of Dunlop’s K950 rubber, a modern version of the popular trials tyre from the era where much of the inspiration for the build was drawn. Even on his most simple of bikes, it is easy to see why Kimura-san is such a revered figure in the scene. Everything is done to the highest of levels and even a basic commuter motorcycle gets custom touches that are otherwise reserved for full show bike builds. It’s all in the details at the house of Heiwa and long may his reign continue.