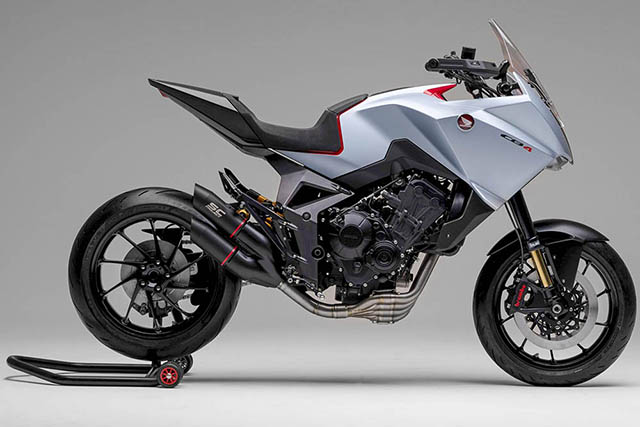 Designed by Honda’s European R&D team lead by Valerio Aiello, the CB4X is Big Red’s latest CBR650F-based concept bike. The 4X boasts a sharp futuristic design with a one-piece tank and front-fairing unit with wing-esque protrusions just above the radiator, and a host of LED lights tucked beneath the nose, resulting in a smooth form somewhat reminiscent of race bodywork. The front of the bike also sports aggressive looking hand guards, an adjustable windscreen, Ohlins forks, and a dual disc Brembo brake setup. 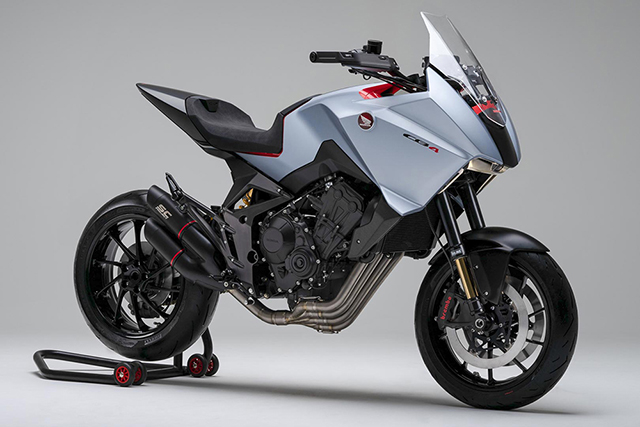 Other highlights on the Honda include a single-sided swing-arm, a four-into-one-into-two SC Project exhaust, and a sharp, angular tail section, and 17-inch wheels front and back. The tires, wheel size, suspension, and lack of protection around the engine and exhaust — amongst other things — clearly point to the CB4X being more of an adventure-themed road-goer than a genuine on/off-roader. There’s been no word from Honda as to whether this concept is merely a design exercise or if the Japanese marque has plans of putting the thing into production, though time will tell. 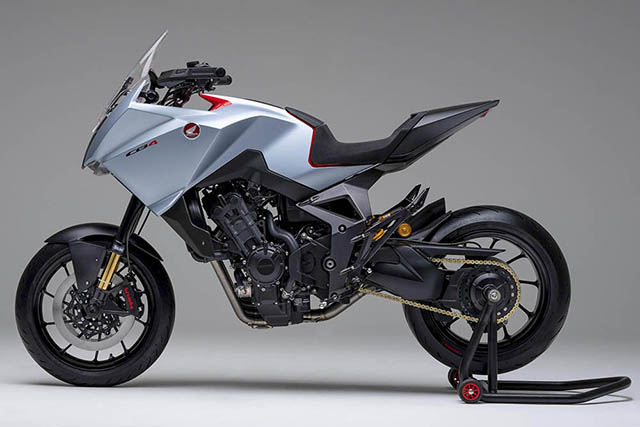 In recent months rumors had been swirling about a new 901 platform from Husqvarna (based on KTM’s 899cc engine), but this week we were treated to the first proto-offering from Husky to feature the parallel twin with the all-new Norden 901 Concept. The Swedish sled sports Dakar-style bodywork with a single-piece tank and front fairing and a no nonsense ADV saddle. Noteworthy features include LED lighting throughout including dual auxiliary lights, a massive bash-plate and crash bars, disc and fork guards, WP suspension, an off-road-friendlty 21-inch front and 18-inch rear wheels, sleek-looking und-guards, and even what appears to be some Husky-branded prototype soft luggage. 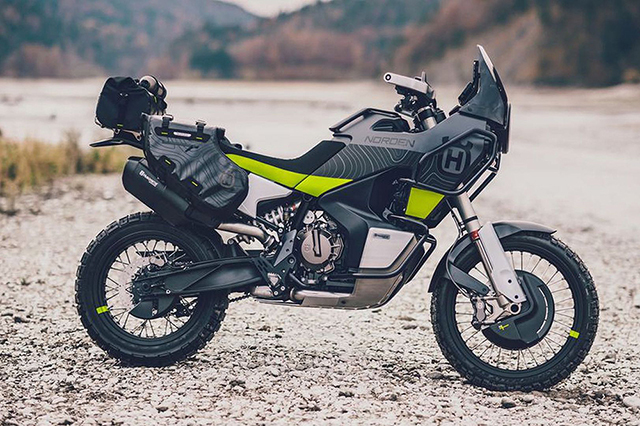 The Norden retains some of its Svartpilen/Vitpilen neo-retro flavor, albeit it leans a bit more towards the “neo” end of the spectrum. The futuristic adventurer also hides a few cool tricks up its sleeve, with the large TFT display being augmented by a horizontally-mounted smartphone which acts as the top half of the screen, doubling the size of the full-color instrumentation. In typical Husqvarna-fashion, the livery is pretty slick, comprised of a mixture of matte greys, popping fluo-yellows, and a wavy, typography-inspired pattern on the fairing and rear luggage. Based on how little the company ended up changes its 401 and 701 models between concept and production, there’s reason to believe we might see something very similar in showrooms in a year or two’s time. 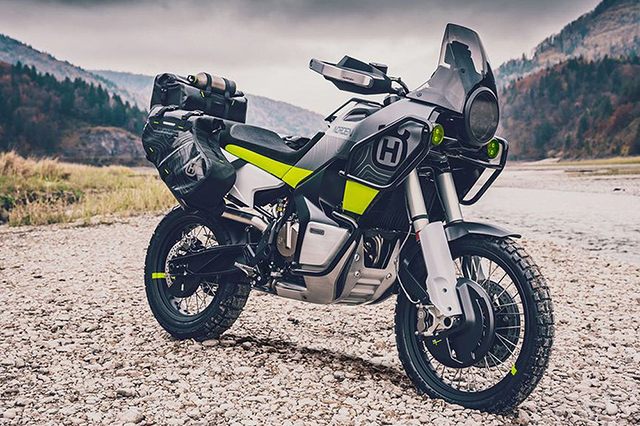 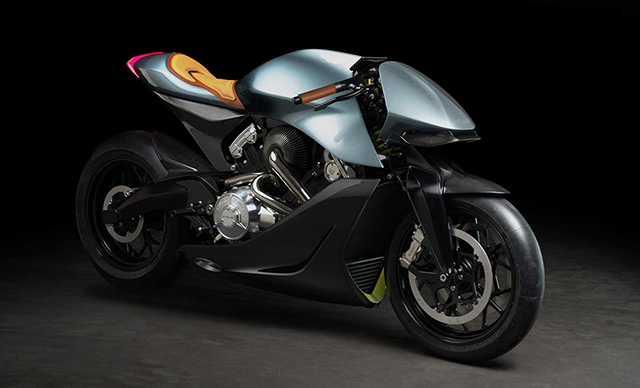 Another noteworthy reveal from this last week was that of the AMB 001; an ultra-exclusive track-only motorcycle born out of a joint effort between Brough Superior and Aston Martin. Unlike the revived moto marque’s recent retro-inspired bikes, the AMB takes things in a profoundly more modern and performance-oriented direction with its sharp, space-ship-esque bodywork — which was penned by Aston Martin, and painted in their iconic Stirling Green — and 180hp, liter-sized, turbocharged V-Twin. 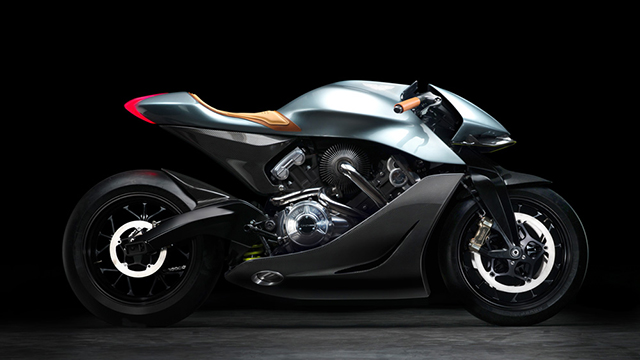 The AMB 001 also sports a ridiculous amount of CNC’d parts like the swing-arm, engine cases, chassis, and double-wishbone Fior fork. There’s also a shit ton of carbon fibre on the thing as well like its subframe and the entirety of the bodywork. The two British companies haven’t yet announced an official release date beyond stating deliveries are slated to commence in toward the tail-end of 2020, and that the run will be limited to just 100 units, all of which will carry an MSRP just shy of $120,000. 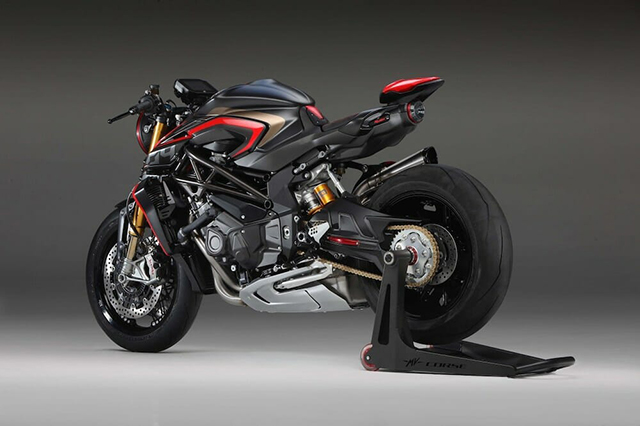 Fresh on the heels of MV Agusta unveiling its new (non-Serie Oro) Super Veloce and Brutale 1000 RR, the elite Italian brand also debuted another highly-stylized model based on the same 200hp+ inline-four and Chromoly steel tubular trellis found in the new 1KRR. Dubbed the Rush 1000, this idiosyncratic Italian two-wheeler is actually a production model and not just a concept or prototype. MV says the unique new model was inspired by the drag-racing scene, as well as touting the bike as being the first production model to utilize radial valves and titanium connecting rods. Rolling on what appear to be beefy Kineo rims with a disc insert in the aft unit, the Rush features an interesting tail section with a raised bumstop of sorts. The sleek tail section feeds into a sculpted tank and radiator covers — that like the Brutale appear to generate some down force on top of looking the business — before reaching a circular LED headlight that looks to be borrowed from MV’s ultra-trick RVS#1. The dual-pipe SC Project exhaust is another noteworthy element on the MV, as is the top-of-the-line running gear; Ohlins electronics suspension and Brembo Stylema Monoblocs. There’s also a TFT dash and a host of carbon fiber and billet items rounding out the impressive naked. MV hasn’t announced pricing yet, but if the rumors are to be believed, it’ll be in the $35K ballpark. 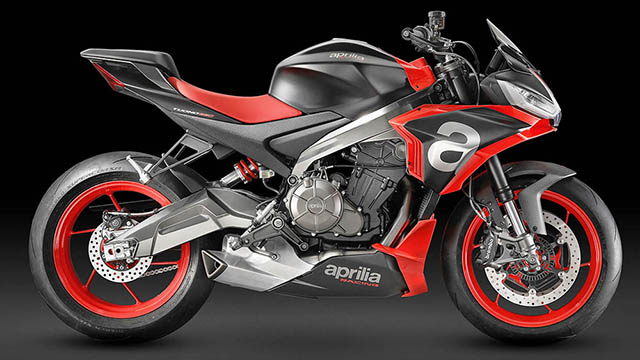 Alongside the debut of Aprilia’s RS660, the company also showed off its “naked” version of the mid-sized twin with the Tuono 660 concept. The T6 gets the same parallel twin engine and aluminum chassis as its fully-faired brethren, as well as the same LED headlight (with DRL’s), and to be frank; the majority of its bodywork. For a so-called “naked”, the thing sure has a lot of bodywork, though it’s hard to knock when it looks this good. 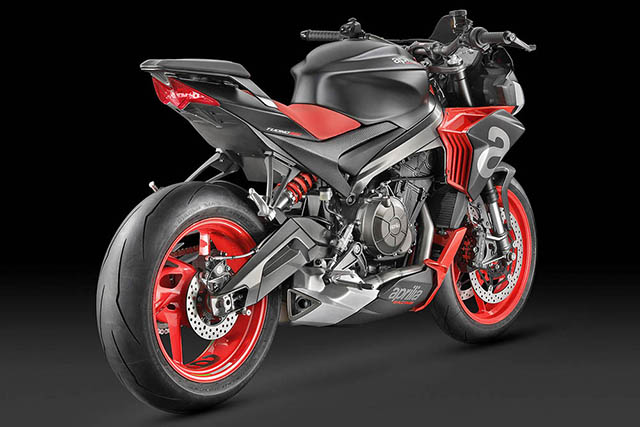 Interestingly, certain aspects of the Tuono are decidedly un-concept-like, as the bike actually looks more like  production model sans mirrors and license plate than it does a concept. The fact it has passenger pegs and pillion are more in line with a motorcycle slated for production than a prototype. It’s definitely an attractive offering, and with the raised handlebars, the mid-sized Tuono looks like it would make for a stellar road-bike, now we just have to wait to see if it’ll end up on roads. 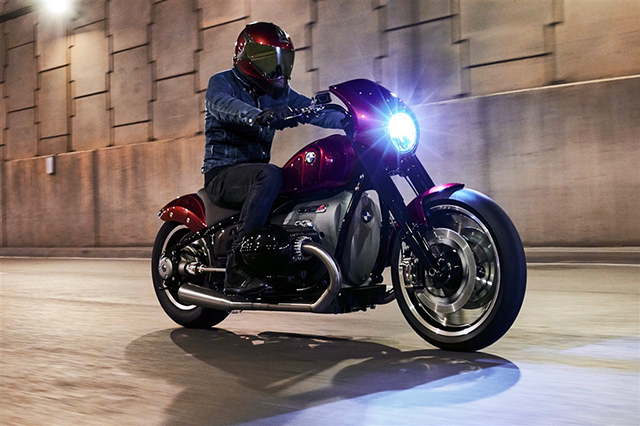 Back in May BMW debuted its new 1,800cc boxer engine in what was dubbed the R18 concept; a big-bore bobber inspired by the Bavarian brand’s models of yesteryear. The initial R18 was followed up by a pair of custom bikes constructed around the 1.8L protomill; one from Revival Cycles; and the other from Custom Works Zon. Fast forward to this week and BMW pulled the cover off yet another concept model powered by the aforementioned lump with the R18 /2. The /2 is a more contemporary take on the original antique-flavored R18, with the new concept bike featuring more of a cruiser-style tank, and LED headlight shrouded behind a bikini fairing. Meanwhile, the older concept’s Pegusa-style saddle has been swapped out for a tuck and roll unit, and the fishtail exhausts were replaced with more modern, round pipes. In the past, BMW has missed the mark with its cruiser attempts (to put it mildly), though the same can’t be said for the R18 /2. The /2’s lack of exposed shaft drive, side-covers, and airbox definitely suggests that the company may be nearing production on the 1.8L workhorse. 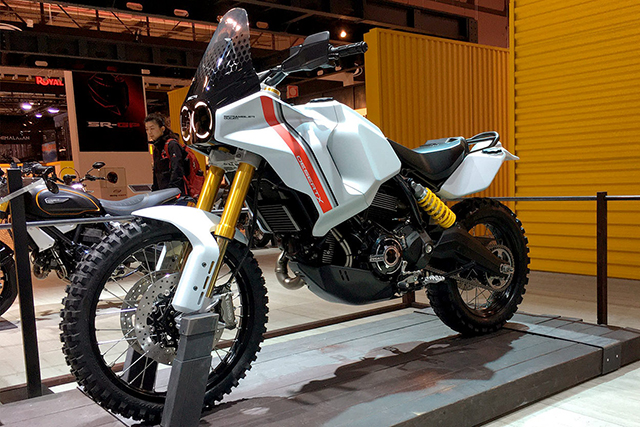 Last week as we got ready to kickoff EICMA, Ducati decided it would shake things up and get an early start on generating hype for some of its upcoming wares by releasing images of two Scrambler concepts at Ducati World Premier Week with the Scrambler Desert X and Scrambler Motard Concepts. And as promised, the Bologna firm has now revealed these two protoScramblers.

The first of the two bikes is the motard, and is a slick city bike with MX-style number plate, fender, and hand guards, plus tracker-style number plates on either side of the Scrambler’s signature saddle. The “62” numbers slapped onto various parts of the Motard raise the possibility that the Motard, should it see production, may be based on the entry-level Scrambler Sixty2 platform, though from looking at the engine it’s clearly the 803cc size. 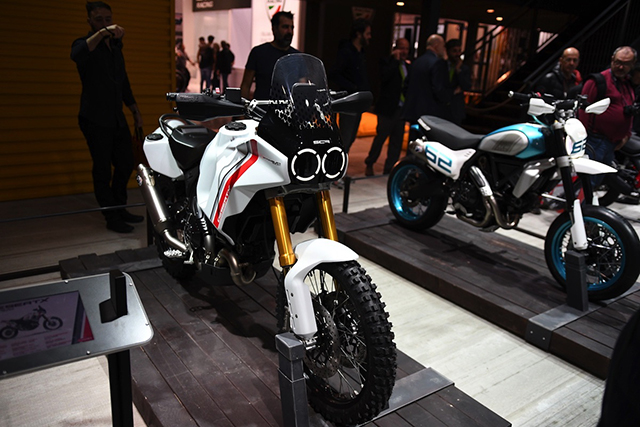 The more interesting of the two Scrambler concepts — at least in my opinion — is the Dakar-style Desert X. It may seem like an odd choice for Ducati with the brand already offering Desert Sled and Urban Enduro variants of the Scrambler, though the flavor is pretty different with this one as it’s more based on rally raider machines than McQueen-style desert sleds. Like the other two ADV bikes on this list, the Desert X gets a single-piece tank and front fairing complete with navigation tower and an off-set gas-cap in its plus-size fuel-cell. A tall windscreen is also in the mix, as are two front discs (which is standard on the Scrambler 1100, which is what the DX is based off of), a Termignoni pipe, and what appears to be the same long-travel suspenders seen on the Desert Sled.

Here’s to hoping one or both of these beauties see production.