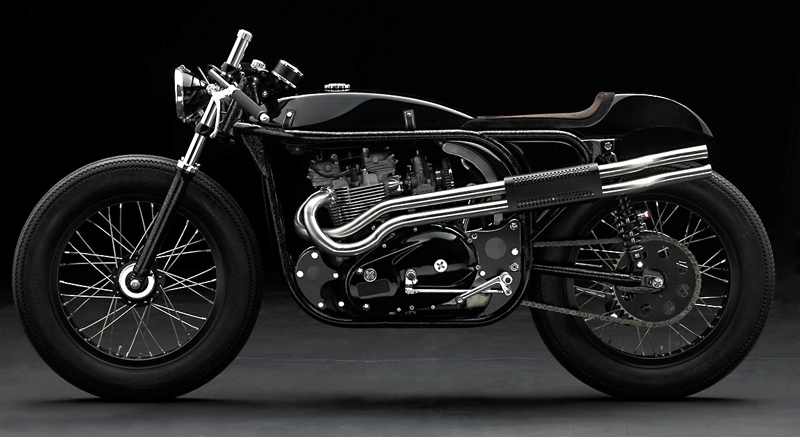 Could this Triton be one of the coolest motorcycles ever made? It’s not just a motorcycle, it truly is a work of art. We originally spotted this sleek black beast on BikeEXIF just before Christmas and haven’t stopped thinking about it. Created by French designers Frank Charriaut and Vincent Prat from Southsiders MC, they had been planning to build a unique bike for years but it wasn’t until they met a Frenchman by the name of Daniel Delfour at the 2008 Legend Of The Motorcycle event in California that they new they had found the perfect builder for the job. This is how they described the project: “As English motorcycle fans, we choose to use a Norton featherbed frame and a Triumph 750 Bonneville engine,” says Vincent. “But we didn’t want to make the thousandth café racer or Triton; we decided to follow our own road. We started designing a mix of Batman’s motorcycle with a T.Rex fastback and Cat Woman’s curves. Inspiration came directly from the culture of comics.” They sure succeeded, it looks like it could have been built by Bruce Wayne for the streets of Gotham City. To read the full story and to see more pics of this amazing Triton check the article on the Southsiders MC Blog. You can also view this Karl Lagerfield short film that features the bike. [Photo by Benoit Guerry from Studio Ze]