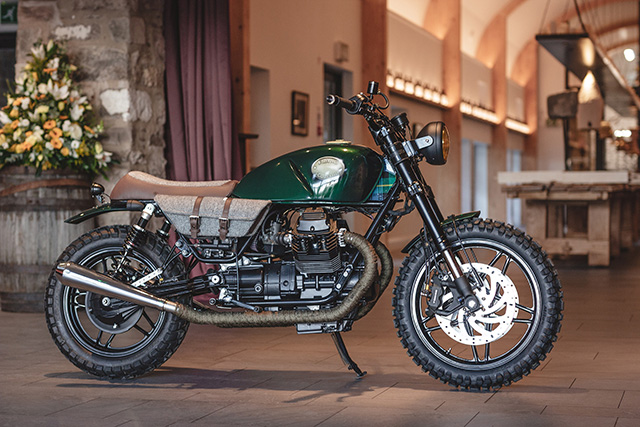 With the Northern Hemisphere riding season now upon us, builders in the top half of the globe are unveiling their latest creations. Those looking to make the most of the summer sun and the conditions that surround them will surely have spent the winter producing just the right bike. Enter Scotland’s JM Customs who’s hit the brief out of the park with a stunning Moto Guzzi Scrambler. From the bones of a 1986 V65 Florida ‘The Flying Scotsman’ is ready to shred the streets. 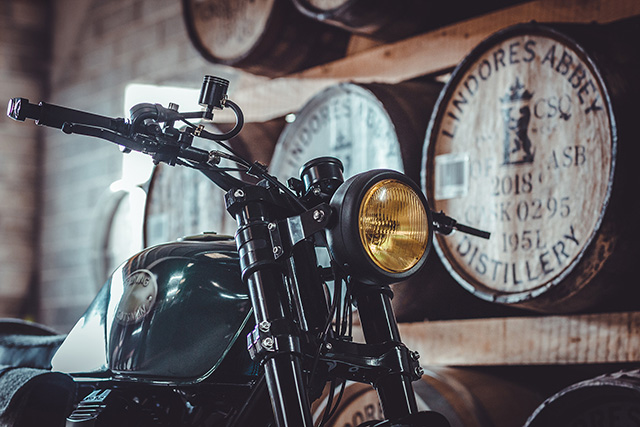 James Moir had a successful career in the country’s oil and gas industry, but with a life long dream and influenced by the endless custom motorcycle shows on the Discovery Channel he decided to walk away. On the banks of the River Tay in Perth, Scotland, he founded JM Customs and joined by a small team their business continues to grow. From servicing and repair work that takes care of the local bike community to unique customs, it’s a one-stop shop, high on pride in perfection. 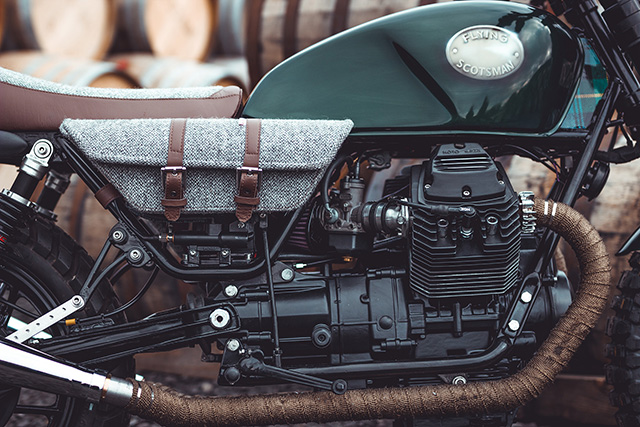 The design and ethos of the build is heavily based around the train of the same name, that has serviced the Edinburgh to London route dependably since 1862. And in a Moto Guzzi V-powered machine you get that locomotive like feeling from every model. But the V65 Florida was designed as a highway cruiser, ape bars, forward pegs and a laid back style; all of which has been pulled off in pursuit of the scrambler style. 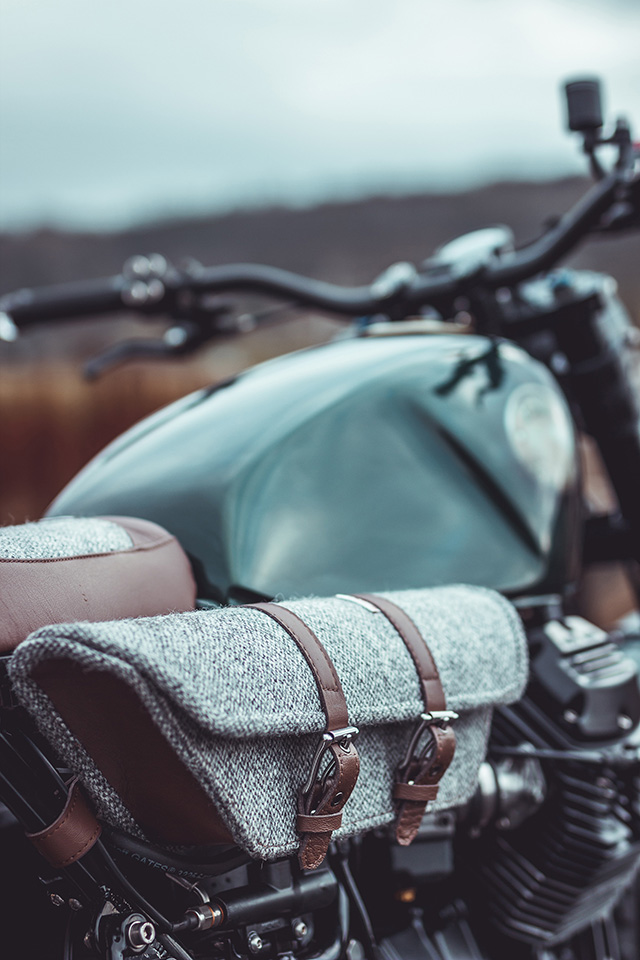 The frame itself has been stripped down, smoothed out and treated to a thorough de-tabbing to get it back to basics. Then the grinder was fired up as James cut back the subframe and welded in a rear hoop to replace it. Finally, a set of exhaust hangers was fabricated and the whole thing was sent out for a hard wearing layer of powder coat. The stock tank, big, ugly and with cruiser only styling was never going to work and the hunt for a replacement was on. Swung over the backbone is a far more befitting unit from a 1980 Suzuki GS850, that’s been body worked to perfection and retains its size so as not to be dwarfed by the beefy Guzzi engine. The rear fender is of generous proportions to catch the flying debris, while a hand made front fender sits over the tyre thanks to custom mounts. With the stunning seat and satchels in bespoke Harris tweed and leather brought to life by Viking Motorcycle Seats. 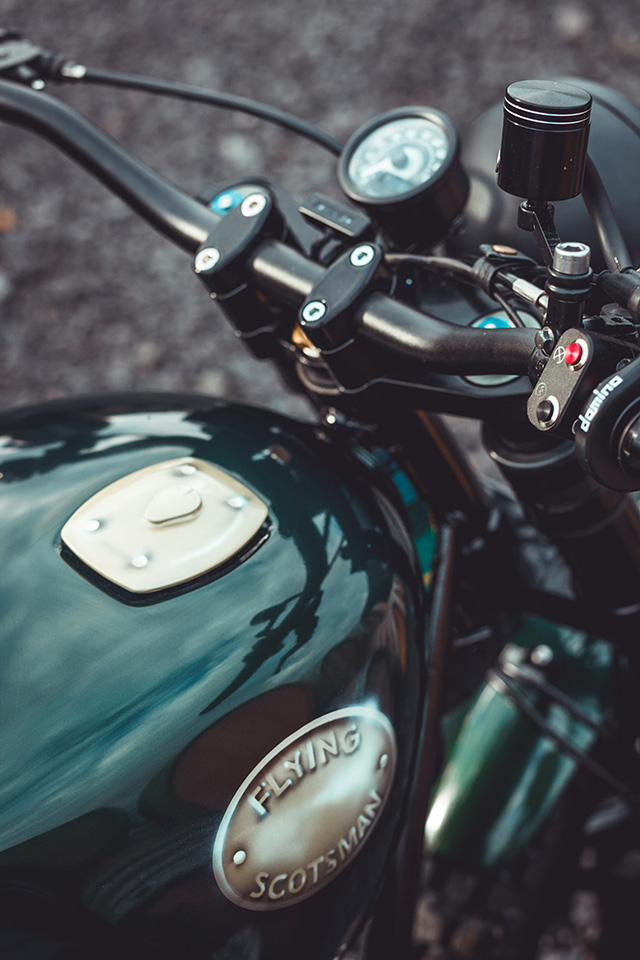 To get the big girl to handle the pogo stick like excuse for suspension fitted by the factory has been thrown aside. In its place, the team have fitted a set of Suzuki K7 GSXR 750 forks with new bearings and a custom top triple clamp making the conversion possible. To fit the Suzuki radial mounted brakes a set of custom machined rotor carriers are deployed and the system finished out with HEL Performance lines. While the rear sports adjustable YSS shocks, so both ends can be dialed in. 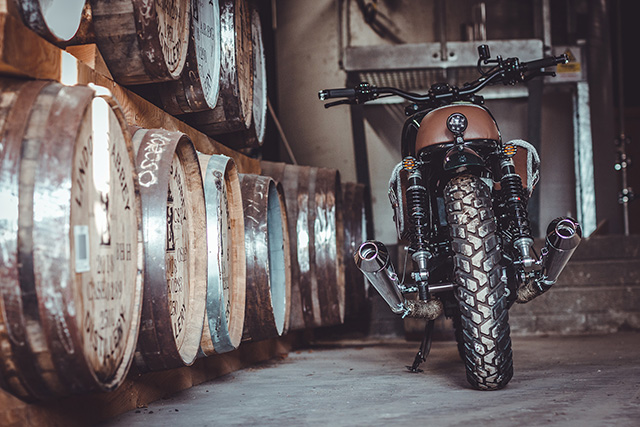 In house mechanic Graeme Findlay ensures the local bike community is always on the road and he’s treated the V65 engine to a good going over. The 650cc engines 2 valve heads have been torn down and given a full rebuild. While the clutch system was replaced before the whole lot was sprayed black and bolted back together. An upgraded charging system and H box by Elektronik box solves the issue of dodgy ’80s electrics and the whole thing barks out of chrome megaphone end cans. 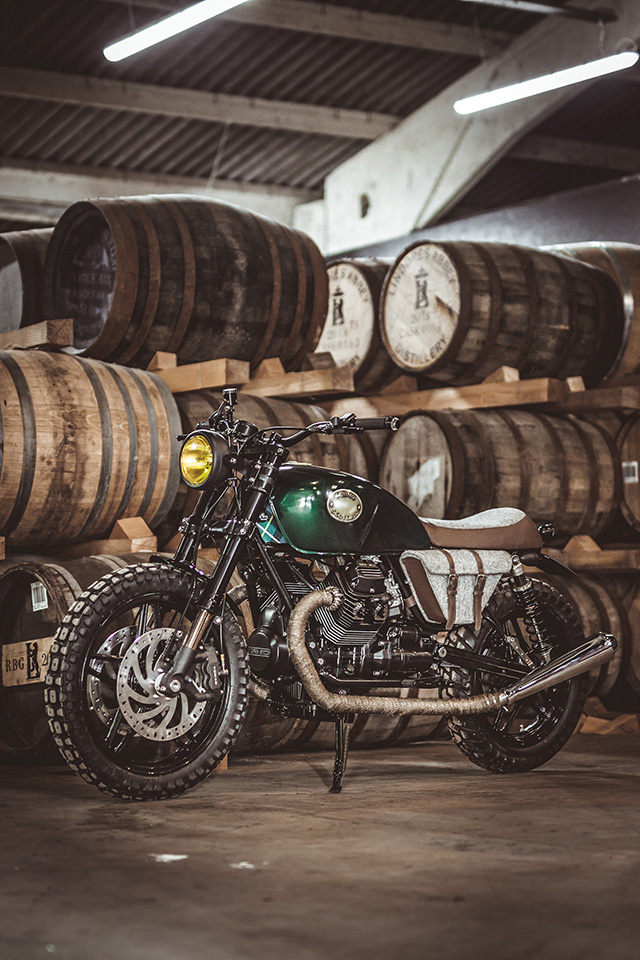 Up on the new fat bars everything is taken care of with new switch blocks, bar end indicators and Domino race throttle. While a yellow lensed front globe and a full array of lights keep the folks at the local registration office happy. But you can’t look at ‘The Flying Scotsman’ without appreciating the incredible paint laid down by Aaron De La Hayé. He’s even added in a hint of Tartan and this JM Customs creation is ready to rip up the sun-drenched Scottish hills. 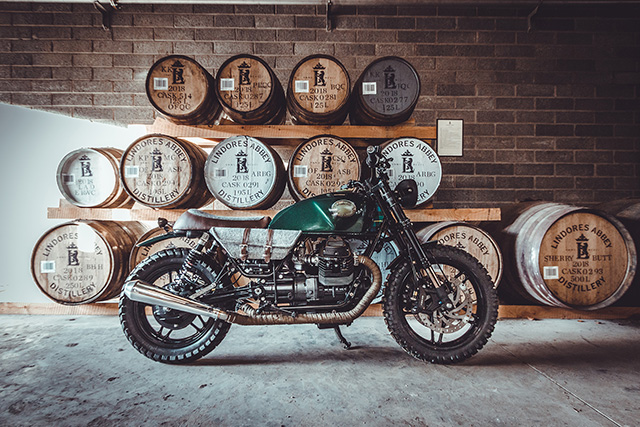