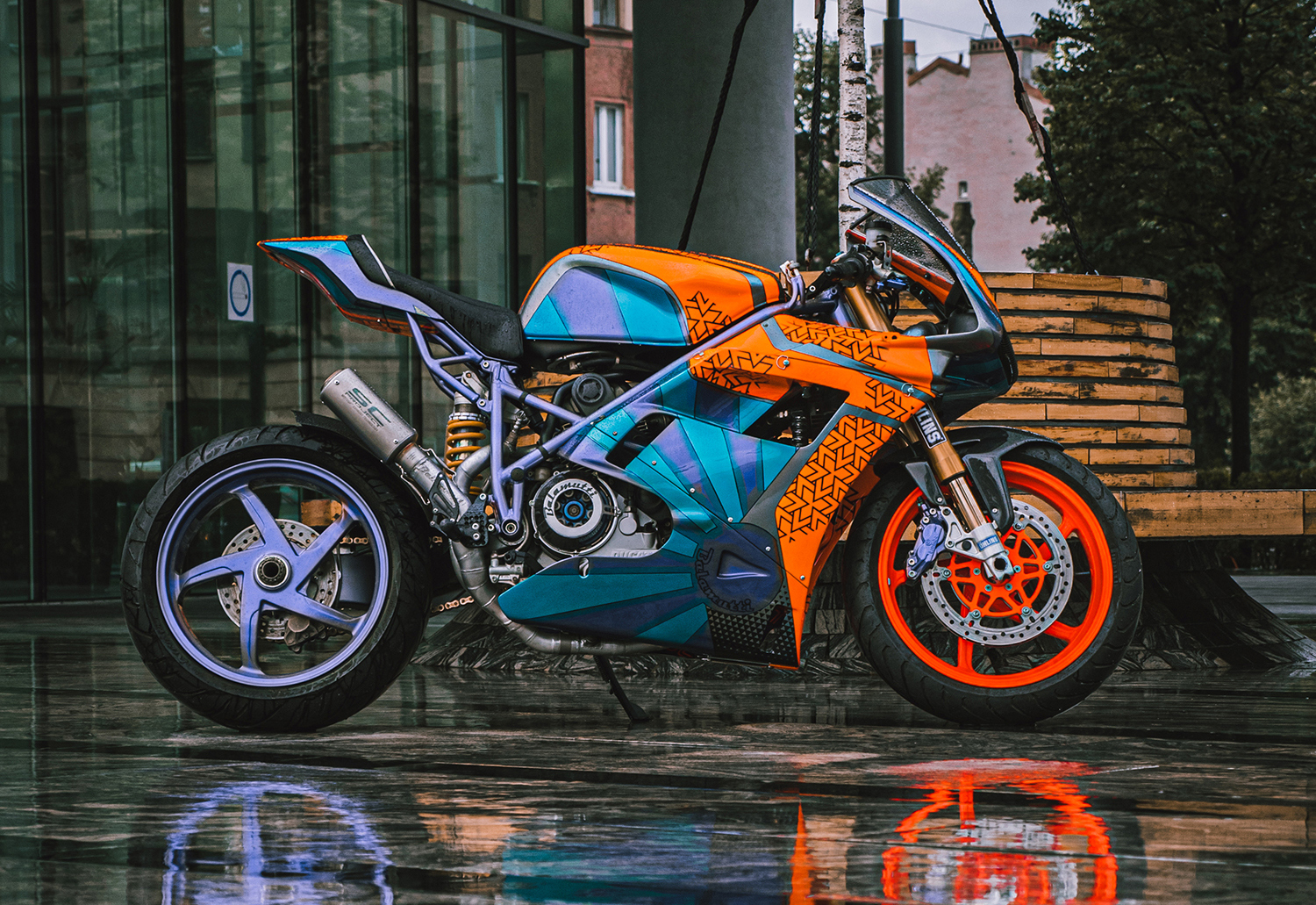 He’s ba-aack, and once again our favourite Russian mad scientist has created a magnificent machine that is sure to ruffle the feathers of many a purist. But, that’s why we love him, he takes the parts he can get his hands on and turns out sensational builds that never fail to get tongues talking. He is, of course, Vitaliy Selyukov of St Petersburg’s Balamutti workshop and he’s been burning the midnight oil to finish this wicked street bike. With his obvious love of Ducati’s he’s combined an unusual combination, a 996 and a Hypermotard, with a little Monster thrown in to truly capture the Frankenstein effect. The result is a hard charging, lightweight sports bike with the personality turned up to maximum effect, he calls her Neytiri.

To tackle the initial response that some will have head-on, “you can’t do that to a 996!”, it’s important to remember that in many countries the ability to restore a bike back to original condition is drastically hampered by parts supply. Then factor in the extra premiums associated with doing a resto on a truly exotic machine, shipping costs, insurance problems, lack of an official importer and you can be left with few other choices than to make the most of what you have. Also, he can and he did! So with that out of the way we can move onto the bike itself that started when Vitaliy got his hands on a 996 frame that had the R versions gold suspenders hanging off it.

This got the mad scientist thinking, what engine could he slot in that would take advantage of the relatively modern foundations but give the bike the old air-cooled vibe. Wanting to create a sportbike that could be ridden hard on the street, something you can’t do with the latest V4 without sacrificing your license, he found the answer in the Ducati best built for the urban jungle. The absolutely bonkers Hypermotard, that to hear Vitaliy describe the combination is like “Jean-Claude Van Damme famously doing the splits between two trucks,” he smiles.

Starting with the frame as the bedrock of the build it is impossible to ignore that this is a piece of engineering developed directly from the race bikes of King Carl Fogarty and the tubular steel spaceframe is far superior to many of the trellis offerings from Bologna at the same time. With the suspension having been developed to suit, despite the fact Vitaliy could have flogged them off for good money, the factory Ohlins remain in place to give the bike the full 996 handling experience. The front forks are 43mm that are fully adjustable and feature a gold titanium-nitride coating on the stanchions to reduce stiction.

At the rear end the gorgeous single-sided swingarm is controlled by a race bred Ohlins shock with rising rate linkages. The brakes too are from the factory superbike, but here the mad scientist came out to play! “The two front brake discs are located on the right side of the wheel, making them invisible at first sight. Such an unconventional solution raises many questions and will come as something of a surprise, especially considering that the motorcycle was hidden from prying eyes for almost a year.” But as unorthodox as they are, they sure do work and add a distinctive touch bolted to the lightweight Marchesini wheels.

Of course, all of that quickly fades into the background as the fairings are bolted on and this looks nothing like the sort of bike that rolls out of Bologna. “My friend Leonid from Driveinworkshop helped me create a small neat tail.” Which is topped off with a black and grey seat in leather that radically transforms the rear end profile from the bulbous factory booty to something stripped down and ready to rock. The side fenders have also been modified, with material neatly cut away to reveal more of the engine and all of the open dry clutch cover with Ducati Performance upgrades.

“I paid particular attention to painting Neytiri. With help from Anton from the octopus_art_aerografia paint shop, we spent a lot of time deciding on which basic colours and graphics would work for the bike. I wanted to emphasize the strict lines of the bike’s tail so that it won’t get lost in the overall appearance of the motorcycle. As a result, Neytiri took on a superb deep blue with bright orange fluorescent accents. The bike looks different depending on which side it’s viewed,” Vitaliy tells us. With the front end fitted up with a carbon fibre fender and one of the headlights removed to provide superior airflow into the engine.

Which is the absolutely bananas, Dual-spark, 1100cc lump of Ducati’s finest air-cooled interations, that MCN magazine called the “perfect motorcycle engine.” You can’t judge it by the numbers, its the any gear, any rpm, rampant performance that comes when you crack the throttle that makes it a blast. To give it the soundtrack to match it’s been fitted up with a screaming SC-Project exhaust that finishes out in a more traditional location, than the under the bum, ball frying exit, of both the Hyper and 996. Vitaliy stripped out all of the unrequired wiring and other extras and the featherlight machine is absolutely mental in the best possible way.