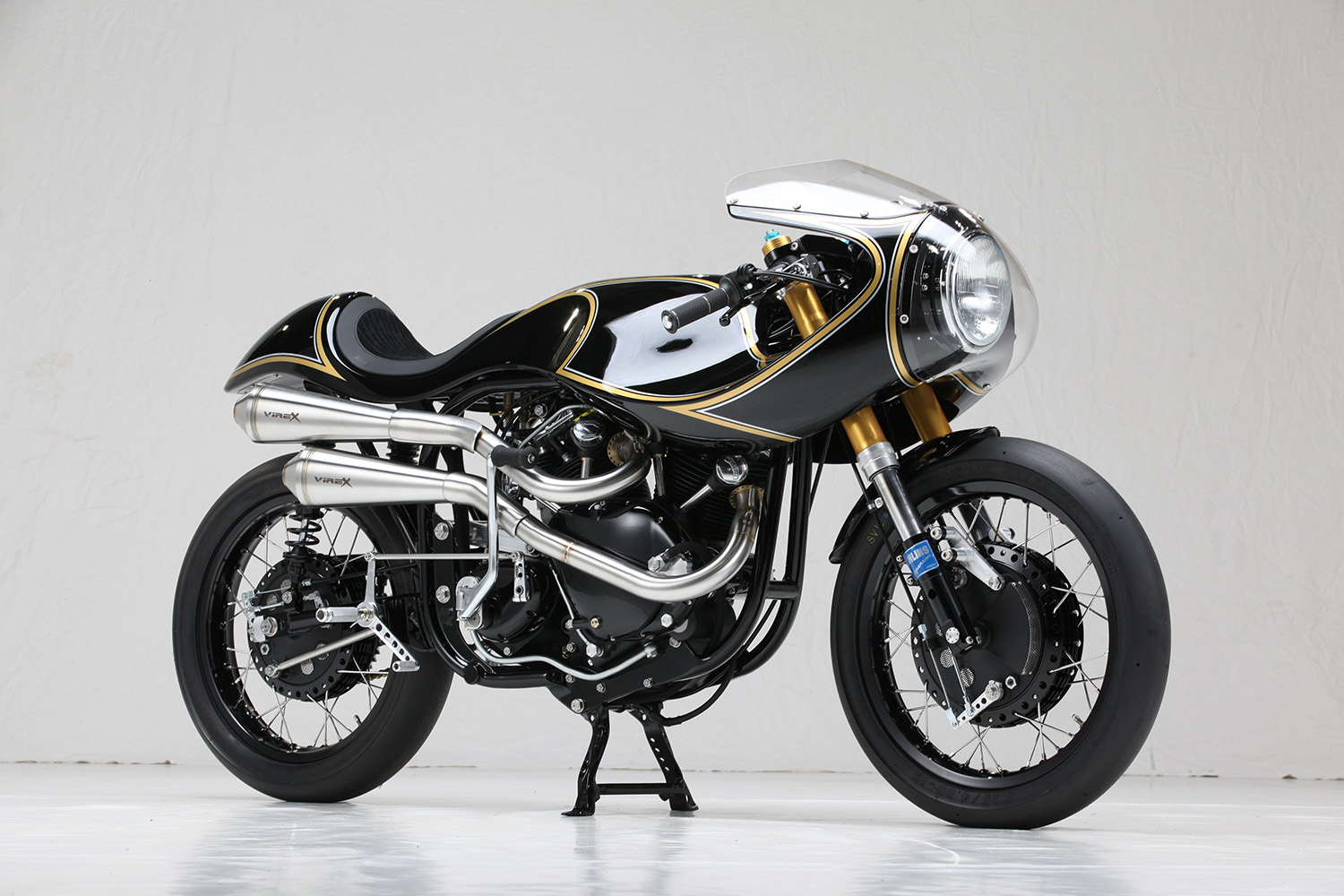 From the fastest Thoroughbred racehorse flashing home to win the cash, to the juicy sweet corn on your kitchen table, man has been mix and matching species for centuries to produce the very best. In the heyday of the cafe racer movement custom bike aficionados were doing the same, crafting hybrid machines to have the baddest bike on the block. While no longer a common practice, one Italian workshop has turned the process into an art form, and this might be their very best to date. From the genius of Stile Italiano comes this picture perfect Norvin, the ultimate in motorcycle nirvana.

The most famous of the hybrid motorcycles from the ’60s is the Triton, a Triumph parallel-twin engine slotted into the legendary Norton featherbed frame. While several dealers offered up complete turn key bikes, others sold a conversion kit for the home builder. There were more of course, the Harton added some American muscle in the engine department while the Tribsa used the strength of the BSA frame to full effect. But the holy grail and the one that stayed competitive on the track for nearly two decades is the Norvin.

In Italy, Gianluca and his team at Stile Italiano have built just about every variation of hybrid you can think of, as well as an incredible array of Ducati’s and other exotic European machinery. In the game since the mid-90s, they’ve done everything from sell new and used bikes, to compete in the highest levels of racing and since 1999 built custom machines of their own. “We’ve built six Triton’s and four Harton’s but top of the top in the Café’ Racer culture is Norton featherbed frame with the most exclusive twin engine ever built, a Vincent 1000cc,” Gianluca smiles.

To begin their journey to perfection, the team went on the hunt for a featherbed frame and found the wideline style they were after, the design of the legendary McCandless brothers. But it is obviously not a bolt in fit and with a gearbox and Vincent cases the team began the process of combining the two. But for the sake of handling, they decided to take things a step further and cut out the bottom of the frame to position the engine even lower, reducing the centre of gravity. New mounts were made up and welded in before the whole thing was given a coat of black powder.

With the major engineering done for now the attention turned to the bodywork and it is here that Gianluca’s commitment to excellence shines. “It took months and far too many hours to get the perfect proportion as I had in mind,” he explains. But the effort was worth it with the single piece body running all the way from the front cowl to the tip of the tail. The lines are simply exquisite, the curves more those of a ’50s pinup than the barely there heroin chic. Each transition is flawless and the result is both utterly useable and breathtakingly beautiful.

Flowed over the top the colour combination of black, gold and silver is one that Stile Italiano uses on all its hybrid machines. In the case of the Norvin the black is the dominant hue in tribute to the Vincent brand and the Olympic medal colours make up the perfect pinstriping that shows off the contours. To go with the racing pedigree of the machine the top of the tank features an all alloy twin filler, that is matched with the array of stunning machined nuts and bolts throughout the build. While a minimalist leather seat is upholstered in contrasting materials to add to the high end look.

The engine of course is the legendary air-cooled 47° V-twin with 998cc capacity taken from a Vincent Rapide. But it was never going to be left stock and the first step was taking out the cubes to 1140cc and upping the low compression with new forged pistons to take advantage of the higher knock resistance of modern fuels. To fire it all Gianluca took the time to convert the engine to twin spark, while the hand built exhaust system is a fabricator’s wet dream and finishes out in a set of Virex mufflers.

To put that power to the ground it is backed up by a custom clutch and TT AMC 5 speed gearbox. Dump the clutch lever on the new clip-ons and power is sent to a highly modified rear hub, with a custom machined sprocket and a new rim laced up with stainless spokes. The brakes at each end are ultra rare Japanese race drums, the front a huge four leading shoe item. The Ohlins suspension is taken from a Ducati 888 race bike while the full set of slicks gives a hint to the machine’s intentions. The details like the handbuilt rearsets and Vincent Black Shadow tacho just add to the drool factor and you start to run out of superlatives; so soak in the pictures and let it sink in, this Norvin by Stile Italiano is simply as good as it gets!