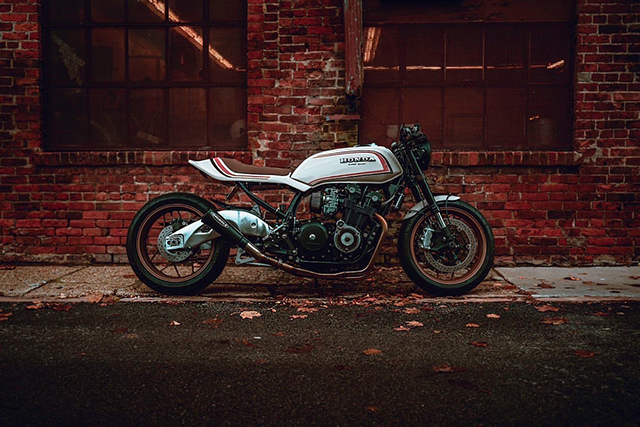 Few, if any of the greatest automotive masterpieces to have been built in the last hundred years went through the ‘design by committee’ process. The entire exercise to take an idea from individual’s imagination to complete working vehicle is exhausting, but when led by a single visionary the result is often incredible. For Cody Fagan of Buffalo New York the process began three years ago and the more other areas of his life proved difficult, the more determined he was to build his perfect Honda 750. Thousands of custom CB’s have been built, but this is one of the most complete and comprehensive we’ve seen to date. 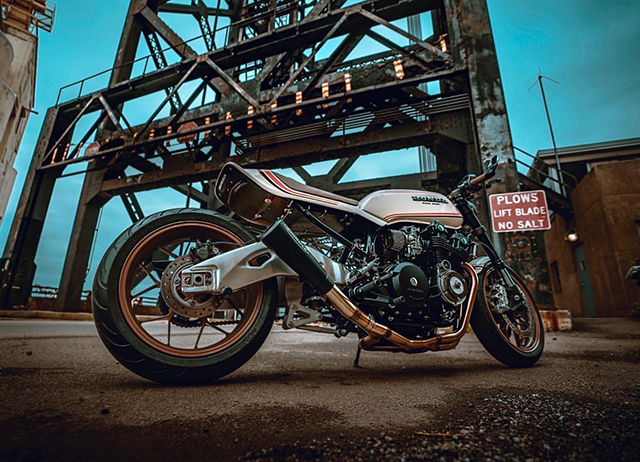 Cody picked up the 1979 Honda for a good price some three years ago, an especially good deal given the truckload of spare and performance parts that were included, some still new in their box. “The previous owner had planned on building a drag bike out of it but then went a different direction with a Suzuki. He even threw in basically everything Honda DOHC that he had which were a complete second 750 engine, another 750 case and a set of 900 cylinders and head that he had planned to use on his build,” Cody explains. 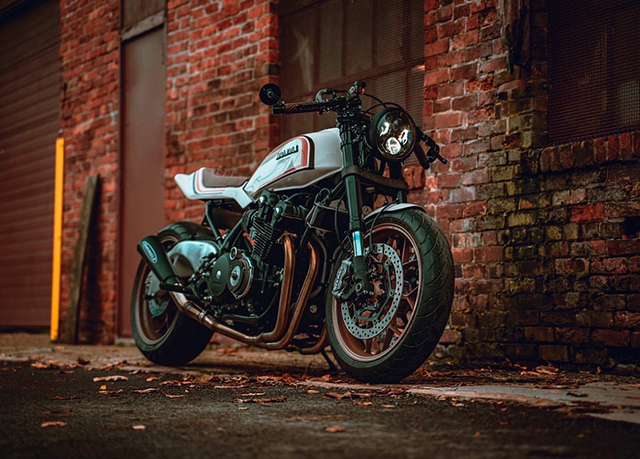 The first two years of the build were spent disassembling, cleaning and collecting parts, and doing research into the very best ways to build up the Honda as he desired. With plans to Frankenstein the motor into a killer 750/900 combination, invaluable advice came from Brent of Vince and Hyde Racing in New Zealand and Jim Sawtell of Jes Built in Oregon. The engine begins with the 750 crank, with grooves in the main journals for 360° oiling and larger sleeves that are taken out a further 5.5mm. The pistons are from Wiseco and result in a total capacity of 887cc at 10.25:1 compression. 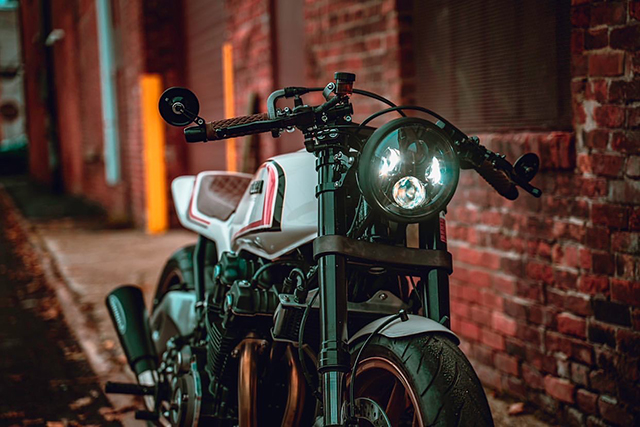 The cylinder head is the 900 model that Cody ported himself and the bigger valves are now stainless with titanium retainers. Overcoming the chain tensioner issues is a bunch of parts from Vince & Hyde, who also sent out a pair of their adjustable cam gears. With more genius added to the oiling system thanks to the addition of a cooler, a 900 pan with AN8 fittings and stainless lines. The gearbox is built up with undercut gears, heavy-duty Barnett clutch and springs and Brent’s shift star for positive clicks through every gear. 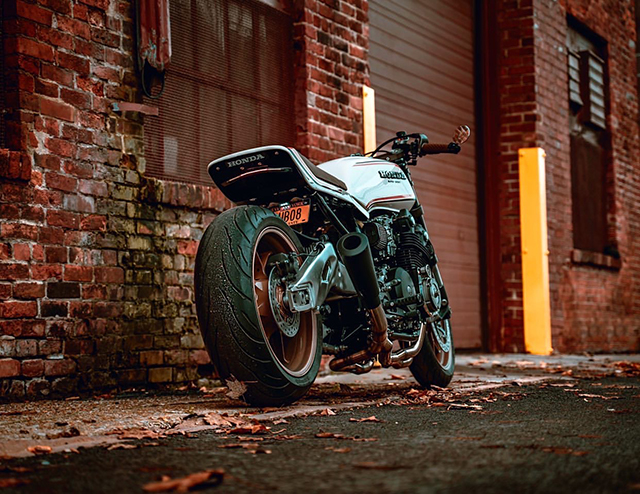 The stock carbs would never keep up with such an incredible engine so the switch was made to the infinitely tuneable bank of Mikuni RS34s. While the Hindle 4-2-1 exhaust system was a very deliberate choice, gaining torque in the midrange to make the high RPM engine more street-friendly. Those revs build even more rapidly with a lightweight open charging system from Cycle X, which is backed up by a comprehensive electrical system of an antigravity battery, motogadget M-unit, dynatek electronic ignition and the solid state regulator rectifier. 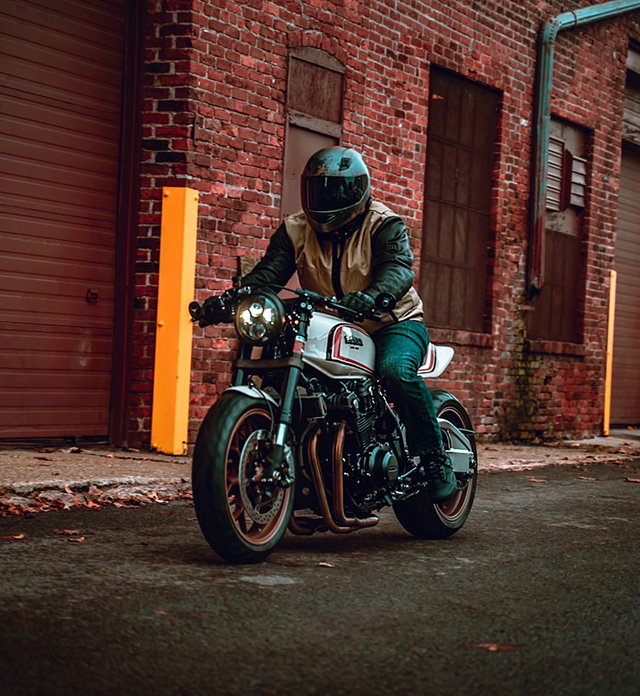 As you exhale you realise that’s just the engine, and Cody sure means business! Just like with the install of the CBR1000RR swingarm, other’s told him to use the tried and true 600 unit, but with on again off again access to a mill and lathe, help from a shop whose work had to be redone and a bunch of engineering tricks he made it work perfectly! No compromise was made on the front end either, 2013 GSXR600 forks fit with a Cognito Moto top clamp. But making the Honda front wheel and big 320mm brakes with Brembo calipers work together in their new home is more Cody genius! 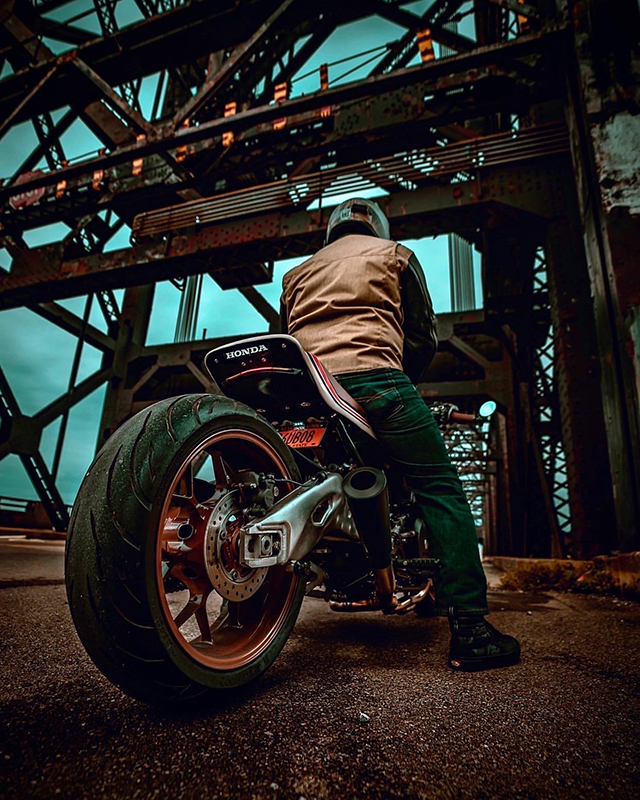 To get the look he was after the frame was modified and shortened at the rear before being powder coated Ink Black, with the engine given the same treatment in Black Jack. Then he began work on the tailpiece, using the lines of the stock piece, designing a new, making a mould and then forming the finished product that merges at the tank far better than most. “The color scheme really came from the Biltwell diamond grips, I loved the Chocolate Brown colour and carried that through to the powder coat on the wheels which is prismatic powders Lentil Brown and the seat, which also has a diamond pleated pattern,” Cody tells us. 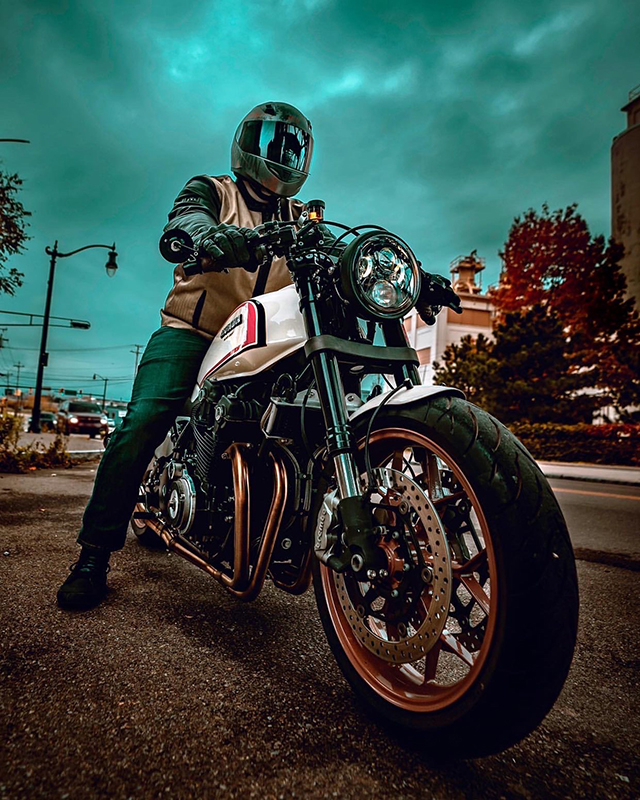 The rest of the paint is flawless, with factory inspired graphics extended across the bodywork and the off white a factory Mini Cooper hue. Wherever you look there is Cody’s touch in pursuit of perfection, from the Venhill cables and Goodridge brake lines, to the hand built wiring loom and Cognito Moto rearsets. The engine is a work of art and the suspension now matching the geometry of the GSXR with modern sportsbike rubber means she handles like a dream. I say she because a friend nicknamed her ‘Honey’; but in the end, it’s the process, not just the remarkable finished product that makes Cody so proud, “I just have so much time, heart and blood into this thing, not to mention the money!” 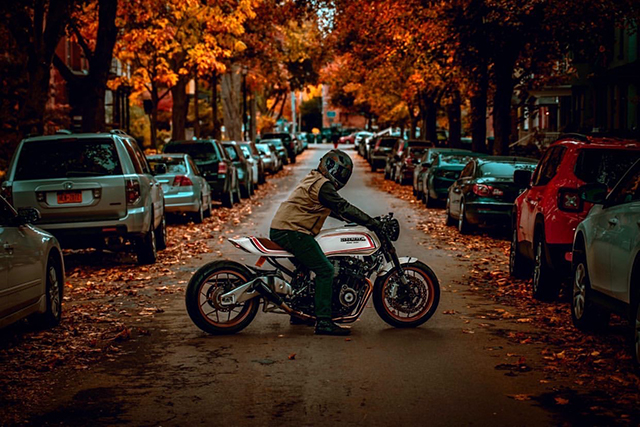