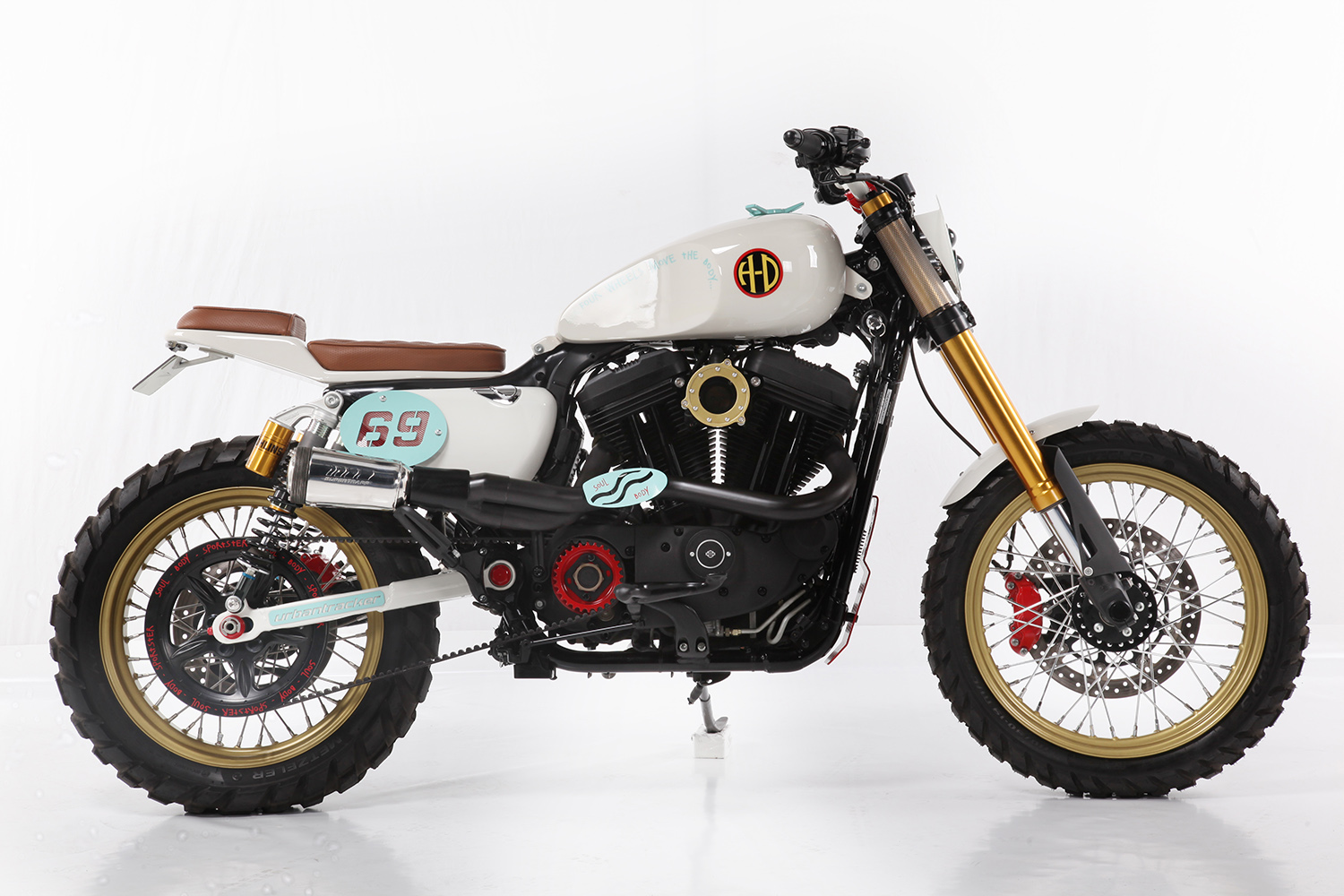 High rise hotels, resort-style living and one hell of a nightlife make the cities of Miami and Malaga practically twins, despite being on opposite sides of the Atlantic. In either place you come to play and have a good time, making them the perfect home for a custom motorcycle workshop. So rather than decide between the two, Fran Manen lives it large with a headquarters for his company in both locations. At Lord Drake Kustoms they do it all, whether you want to do the ton on a cafe racer or cruise the strip on a chopper they can make it happen. So when a brief called for a Harley-Davidson, with a funky scrambler style that could be ridden two-up, this ‘Urbantracker’ build was born having starting life as a humble 883 Sportster.

So despite the glamorous locations and spending his days building incredible customs, Fran often is faced with a challenge he has to overcome. In the case of this 2010 Harley Davidson Sportster 883, it was building a bike genuinely capable of doing the duties of a scrambles bike and still be able to play host to a rider and their passenger. These very practical desires could not be left to overwhelm Fran’s desire for flair, as seen on most of his epic builds. Many of which are inspired by the first crazy customs he ever saw, in music videos on MTV.

With the Sportster picked as the donor bike, a machine with the torque to carry two while still being sleek, it was time to prepare the foundations. So that the seat could still float over the rear tyre, hold the weight of an extra person and look the part, the rear of the frame was first cut off. Then the areas around the fixing points were re-inforced and metal plate used to close off the frame. With the chassis then given a coat of black and the swingarm powder coated in white for a contrasting look.

Now efforts could commence on the bodywork and the tail section is a very clever piece of fabrication; incorporating both the visual and the structural components in one neat design. The round tube that would normally form a hoop on a subframe is part of the tail, that is then walled off with sheet metal to form the final shape. In addition to the front mount that is bolted to the frame, the twin rear side mounts emerge from the underside to bolt securely to the beefed-up chassis rails. With the top section left flat to accept a pillion and match the underside.

Both the seat and the passenger pad are diamond stitched perforated leather and offer good comfort to rider and friend. The rest of the bodywork is much more simple in comparison, with a blade style front fender sitting on a new mount. Above the masked surround for the headlights was hand shaped and the numbers ghosted over in metal, rather than simply being painted on. A different effect is taken for the small number boards, with the number cut out and painted mesh added in behind. Finally, the stock tank was given a funky filler and the knee dents exaggerated.

Of course, it’s all well and good to make the foundation, but the stock suspension would have bottomed out on the first bump, so the big guns are called in. At the rear, the twin shocks are upgraded to the best with fully adjustable Ohlins piggyback shocks going in. This allows the bike to be quickly tuned to suit either a single rider or two-up transportation. While at the front, the HD forks are average to begin with but Fran made a find at a nearby workshop that would solve the problem. A set of WP’s from a KTM modified to fit the big American.

Those new legs allow for a Brembo caliper to be bolted on, painted up in red to match the rear, it clamps the KTM disc. HD mags would never have looked right, so a set of new hubs allow for lightweight rims to be laced up with stainless spokes. The all-important rubber goes ultra aggressive, and with the size of the tread on those Metzeler’s, the passenger better hang on. They get a set of foldaway pegs, with the rider hanging onto a set of fat bars for maximum leverage to tame the beast.

These, like much of the bike, are finished in a stunning bright white, with red accents and pastel graphics used to bring out the fun side of the bike. Nowhere is this better illustrated than on the painted heat shield in a surfboard shape; a fun bike that never takes itself too seriously. Although the pipes don’t play around, the scrambler set up barking like a bulldog from the SuperTrapp rear can. The hand made air filter was crafted like the rest of the bike at the Malaga factory, with all the right lights and indicators then added to make the motorcycle road legal. The end result not only fulfils the brief but lives up to the high standards Lord Drake are known for, and the fun that surrounds them in the cities they call home.