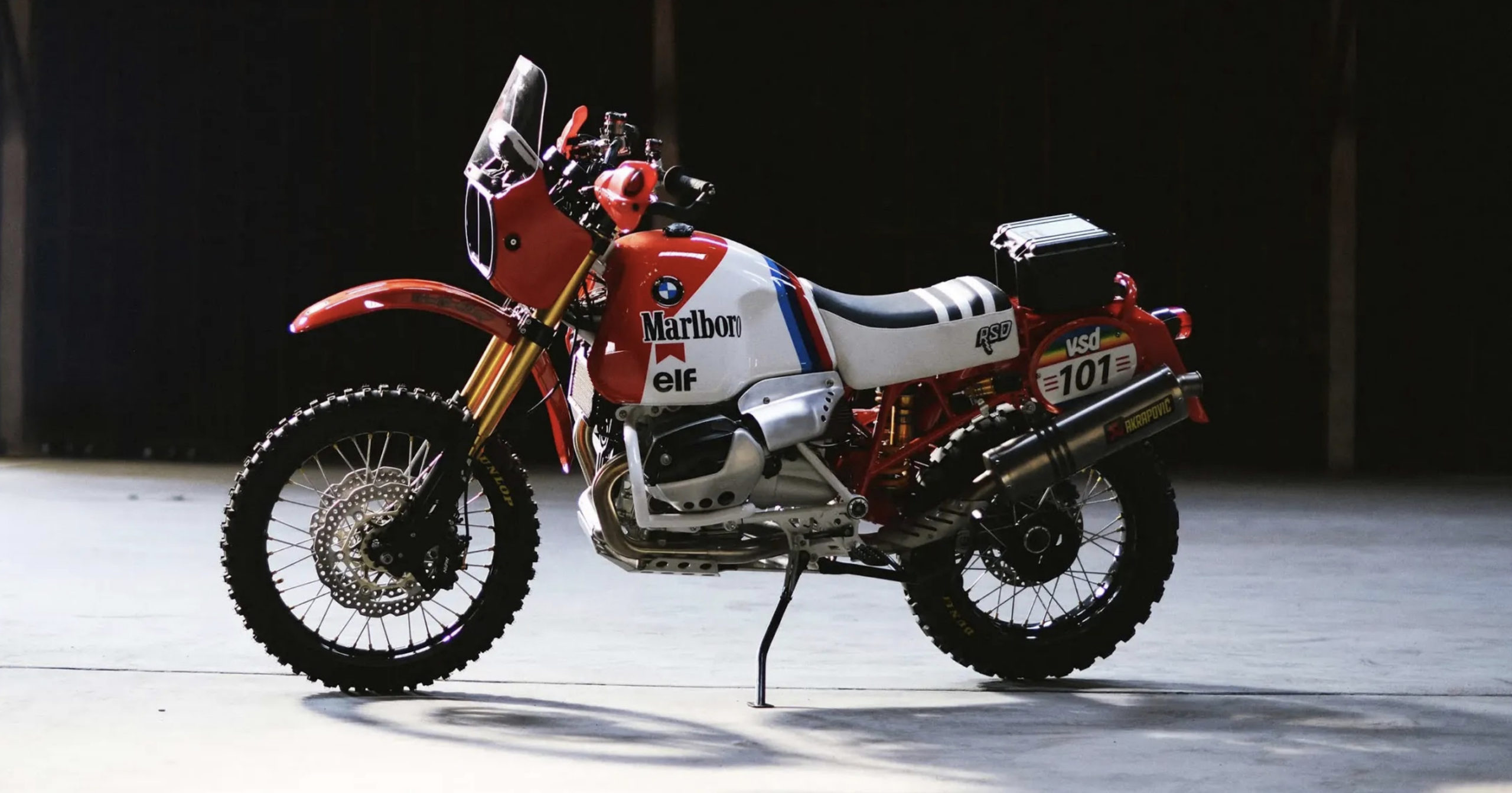 When BMW first introduced the world to its R80 G/S in September of 1980, both the motorcycling public and the press didn’t quite know what to make of the large-displacement shaft-driven twin, as it was a far cry from the lightweight, sub-500cc thumpers that comprised the dual-sport market of the day. After riding the G/S, however, the purpose and merits of its idiosyncratic design quickly became abundantly clear, with the big boxer displaying solid performance in the canyons and similar competence in the dirt.

Powered by what was essentially a lightened and modified R80/7 mill, the inaugural G/S further proved it was more than worth its salt via a series of historic wins at the Dakar Rally, with Hubert Auriol claiming titles at the third and fifth runnings of the grueling, three-week event in ’81 and ’83 before Gaston Rahier famously followed that up with back-to-back victories in ’84 and ’85. Almost four-decades and the mighty G/S remains an enormously important model for the Bavarian brand, with the full-size adventure bike, year after year representing BMW Motorrad’s best-selling model by a fairly significant margin.

This is largely owed to the G/S’s reliability, comfort, premium nature, ability to gobble up miles, and general versatility, though the spirit of the original early ‘80s G/S and its Dakar roots undeniably constitute part of the “Gelande and Strasse’s” unique flavor and overall appeal. And it’s this distinctive character and aesthetic that inspired the latest project from Southern California’s Roland Sands Design, taking a modern G/S specimen and transforming it into a tribute to Rahier’s Dakar-winning racer.

The aim of the build was to deliver a motorcycle that “captured the essence” of the vintage Bavarian works racers, while still retaining the contemporary performance and amenities of the late model adventure mount. Furthermore, the RSD team didn’t just want the build to merely look the part but approached each element and component on the project as if it were destined for the starting line of a hardcore rally raid event upon its completion.

“The bike rolled into our shop as a 2008 R1200GS,” explains the RSD crew. “The client had a few ideas for the direction, all of which revolved around turning the bike into a machine more adept at handling arduous technical terrain. Roland agreed, however, suggested executing it in a neo-retro theme that paid homage to ’80’s Dakar racers, and after a few renders, we got the green light from the client, and the teardown began.”

Once stripped down, the first order of business was to beef up the G/S’s suspension. The stocker’s 41mm fork setup was pulled in favor of an inverted 45mm front-end off of a late-model Honda Africa Twin that’s been fitted with an Ohlins cartridge kit. In order to get the upgraded forks to work with the G/S’s unique Telelever front-end, the entire front half of the steel tubular chassis had to be removed so more conventional framework could be grafted in from a 2018 R nineT example, before a one-off set of billet triples completed the conversion. Soaking up the bumps in back is now an Ohlins mono-shock with a remote reservoir while a Scotts steering damper keeps the big G/S pointed in the right direction when the terrain gets rough.

“When it all bolted together, the geometry was almost identical to BMW’s Enduro HP2, which has off-road chops of its own, finishing the Baja 500 in just over 10 hours on its maiden voyage in 2006,” the RSD team relays.

Because it plays such a pivotal role in a motorcycle’s overall appearance, the RSD squad knew that nailing the tank would be an essential part of creating a modern interpretation of the original adventure bike. So, rather than opting for a bolt-on item from Italy’s UN1T Garage or tinkering with the stock fuel-cell, the Los Alamitos outfit took the most genuine route possible; getting their hands on a NOS 1986 G/S tank and modifying it to accommodate the 2008 donor’s fuel injection bits and frame rails.

Compared to the front half of the framework, the aft-end received minimal modifications, with a couple of light tweaks performed to accept a custom-made white and black leather Saddlemen seat—clearly inspired by the unit on Rahier’s racers—and to make space for a survival kit set just behind the seat in a shock and weatherproof case.

With the tank and seat dropped into place, the team turned their attention to the remainder of the project’s bodywork. Staying true to the 1980s theme, the shop bestowed the bike with a vintage high-mount front fender and rear fender and taillight off of an R100GS. Instead of going with an original Acerbis bikini fairing, Roland and the gang decided to hand-craft their own unit around a custom-made Raceco headlight bracket and rally tower that now houses a Lowrance Elite-5 Ti GPS unit and dual high-intensity Baja Designs XL Pro LED headlights.

Set in BRP risers and capped off with Cycra handguards, the machine is now helmed via a set of ProTaper Evo handlebars and an ultra-trick, Italian-made carbon fiber and titanium brake and clutch lever arrangement. Toothed Hammerhead foot-pegs and forged shifter and brake pedals also replace the G/S’s foot controls.

The 1,170cc twin was left largely untouched, though the stock respiratory bits were pulled to open up room for a pair of more free-flowing K&N filters and a full custom exhaust system terminating in a retro-style Akrapovic muffler—opting for a more modern (and sensible) high-mount placement compared to the ‘80s works racer’s blacked-out, low-mount, two-into-one setup.

For the project’s wheels, RSD called on fellow California company, Dubya USA, which laced a set of oversized billet hubs and stainless steel spokes up with a pair of Excel hoops, with a 21” item in front and an 18” unit in back, both of which are shod in Dunlop D908RR rubber.

No rally raider would be complete without a robust suite of crash protection, so the team set about fully fortifying the ’08 donor. The engine is now protected via an aluminum Touratech skid-plate while the protruding cylinder heads and pod filter setup sit behind custom aluminum RSD cover guards. And, on top of Altrider fork guards, an RSD oil cooler guard, and radial rear-axle and swing-arm pivot plugs, the build also gets a beefy set of SW Motech Rally Low Crashbars and a bespoke radial breastplate.

“The custom breastplate was hand machined from aluminum and built to replicate the lines of BMW breastplates offered on the RSD website,” the shop tells us.

The final piece of the puzzle was recreating the iconic Marlboro livery that adorned Rahier’s bored-out HPN-prepped racers. As per usual, RSD outsourced the job to its go-to paint specialist at AirTrix. The new scheme started with a dual-tone, red and white powder-coating for the frame, followed by a replica livery of the 1980s Marlboro racers, complete with the BMW M-color stripes and Elf and cigarette logos on the tank, and #101 VSD rear number boards.

Appropriately dubbed the “DAKAR GS,” the build represents a decided change of pace for the RSD crew, though, despite the project seeing the team venture into novel territory, the shop’s clearly shown it’s in no way inept when it comes to tackling an adventure build. And while we don’t expect to see any RSD-built bikes competing in the Dakar anytime soon, we could definitely do with seeing more ruggedized adventure builds from the Roland and friends. Lastly, to commemorate the DAKAR GS, Roland Sands Design has released a limited-edition capsule collection that borrows Marlboro’s mountain logo to create a six-item “Roland Sands Racing” product range.