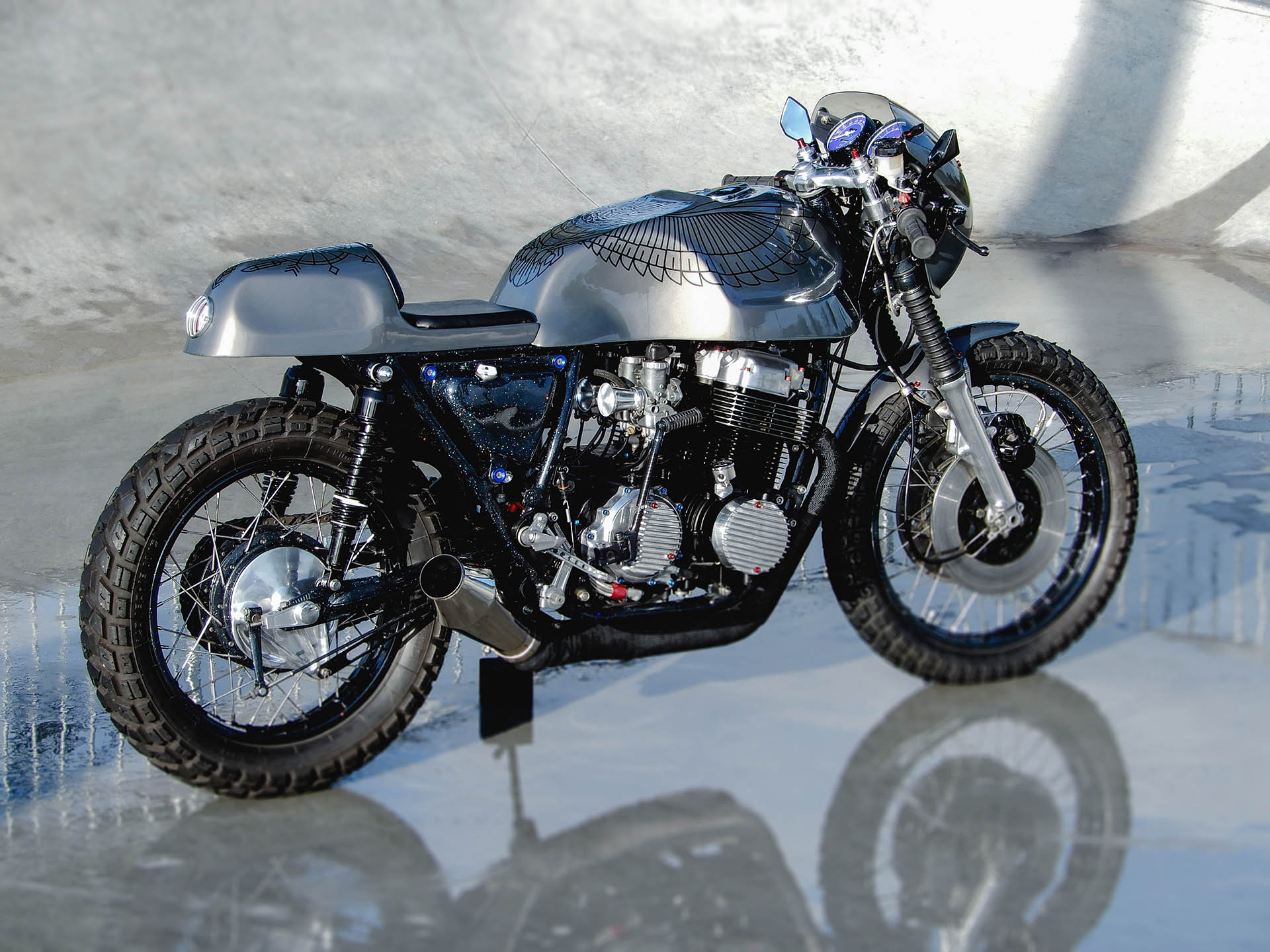 In life, there are our dreams often curtailed by our reality and there is our ambition frequently at the mercy of our talent and bank balance. But the forward progress of time means that these things never stay the same forever. Meet Bas Kelderman, an incredibly gifted graphic designer and illustrator from the Netherlands, with a love of fast cars and motorbikes. But the one that really grabbed his heart was the 1976 Honda CB750. Over the last 20 years he first worked to acquire his dream machine and then after an incredibly long wait, found the time and had gained the skills, to build this stunning custom bike in his tiny inner-city apartment.

“About 20 years ago I saw this magnificent machine. The first time I saw, smelled, and heard this bike, I was completely in love with the Honda CB750 K2. At the time I rode my first motorcycle a Kawasaki Z250a from 1979,” Bas tells us. But six months later he collected a nice cheque from his first big job as a freelance graphic designer in Amsterdam. And there was only one place he was going, back to the bike shop were that glorious CB750 still sat. For a few years he rode it on any sunny day he could, but soon it developed problems and life’s responsibilities meant the Honda was shuffled aside.

The years flew by, his business grew and cars and bikes become a major part of his life. But still, the CB sat, it’s condition slowly deteriorating. “It wasn’t running anymore and everything was rusted, tyres flat, leaking oil and gasoline and rubbers dried up,” Bas recalls. Then in 2017 he decided it was time for the Honda to be reborn, a design was drawn up and his tiny 5m² garage became his workshop; so too his living room, so shoutout to his very understanding girlfriend! “Besides the looks, I also wanted to ride it! Cool looks, a practical bike and easy to disassemble and work on.”

The bike was pulled apart and a list of parts was drawn up, with new items acquired from around the world. The frame and swingarm were sent out for sandblasting to remove the rust and grime before it was given a coat of black powder with heavy metallic flake, which also found its way onto other parts for a little pop. Then it was the bodyworks turn with inspiration taken from a very special Ducati. The rear tail unit is 900SS for that classic ’70s appeal, while the custom tank is a unique Imola like design made to fit the Honda. The fender is a slim off-road unit and the bikini fairing was originally destined for a Kawasaki EL250.

With the tins given a stunning coat of BMW Champagne Quartz Metallic paint, Bas was ready to design his graphics. This is where he shines and with the bike known as ‘Night Owl’ and inspired by Native American culture, he created a tattoo-like effect that brilliantly incorporates an owl, arrow, and dreamcatcher in black, popping off that metallic paint. The leather seat is a two-piece item in black that includes an incredibly neat glovebox in the rear hump. While a CB750F oil tank slots in below and a tinted screen is fitted up to the fairing to complete the look.

The first issue that had plagued the Honda years earlier were the electrics and an all new re-wire takes care of that. The front headlight is an LED Daymaker in black, while the taillight is an item originally designed for a Harley. Behind the gauges are custom LEDs with the faces completely re-designed with body matching graphics. There is a small Motobatt Gel battery, tiny indicators and making sure he’ll never have to struggle with the wiring again, the bodywork comes off with 2 nuts, 4 bolts and a simple electrical connector!

That means it starts first kick and the classic Honda 4 cylinder engine is totally rebuilt with a big bore kit taking capacity out past 800cc. The rebuilt and re-jetted carbs draw air through velocity stacks while she makes a mean bark with the 4-1 exhaust booming out of a stainless cone muffler. The engine is dressed up nicely too, with all new bolts and an array of Joker Machine side covers. An alloy oil catch can is plumbed in with braided lines and the pressure gauge for the lubricating system monitors engine health at all times.

Bas was keen to add a little scrambler to the bike and the Heidenau Scout K60 tyres certainly do that, wrapped around newly laced rims. To bring the suspension up to scratch a new set of rear shocks from Emgo and TR400 CNC pre-load adjusters maintain the classic look with the chance to dial in the setup. With the brake system also getting an overhaul with stainless lines, a 19mm Nissin master cylinder and TR400 CNC Brake torque arm for the rear. Simply no area of the bike has gone untouched and for the man behind MeneerKelderman.nl, his customers have a rolling example of his graphic design skills when Bas arrives on the job. “It’s nice to ride over the Dutch dikes and local roads to clients and friends,” he smiles!