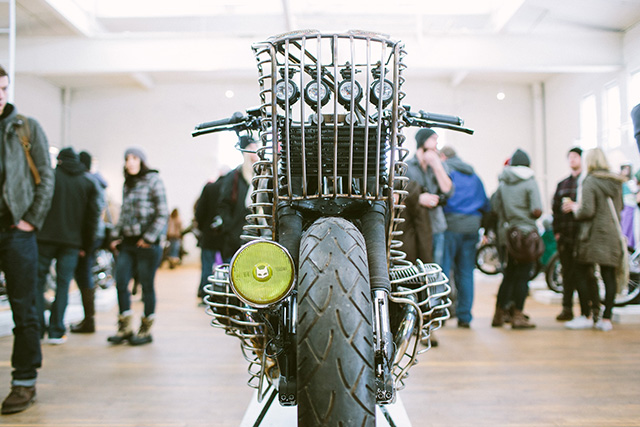 There’s a reason why Australia is bottom of the pile at the winter Olympics, and it’s mostly because we suck at snow. That’s why we were lucky to have our new arctic expedition team, comprising of the supremely kick-ass Alicia ‘Motolady‘ Elfving on words and all-round top bloke Scott Toepher on lenses, to brave the Portland polar vortex and cover The One Motorcycle Show in person. Enjoy.

This year the One Motorcycle Show became commonly referred to as the One Moto Snow, and once you look through the photos it’s no wonder why. Thursday (the day before the event) an unexpected snowstorm hit Portland and many of it’s southern cousin cities. If you were driving into town that day you would’ve surely been warned of the sheer roadway mania; twenty car pileup on the interstate, general news of the sudden ‘snowmageddon’… every semi-truck pulled over to hook up their chains, smaller SUV’s and their trailers flipped on the side of the highway… cacophony to say the least. Some folks hit even rougher conditions coming in from the East, causing major flight delays and some builders to turn around and head home who were driving with precious cargo. As they say, the show must go on… and it did. Friday everyone loaded in their bikes across icey terrain and dusted off the snow, signed in and rolled into the photo line. Every single bike, one after another, completely different than the next and all stunning in their own right. Each had it’s own purpose, mood, it’s own voice… and the one that seemed to speak the loudest was ‘The Impostor’ from El Solitario. It rolled in dusted in snow from the blizzard like fluff whipping around outside, then was positioned in front of a double-stacked set of display boxes and hoisted by not three, not four, but five people into it’s resting position in the middle of the upstairs ballroom. It’s rough yet elegant cage like fairing and bodywork pulled in the eyes of everyone in the room. Folks fluttered about getting the space prepared in a flash- and before you could blink an eye the show began, and people began to pour inside the doors to the big warm gallery from the frigid outside. Each day was packed with people- constant smiles and deep conversations while staring intently at custom parts, rare bikes, unconventional modifications, etc. Being inside it was easy to forget the weather- most of what you could need was available within the show’s walls. Delicious pizza from Sizzle Pie (a local favorite) on the second floor, See See’s full cafe downstairs, a bar with cocktails and plenty of beer, awesome apparel and swag in the merch area, and eye candy abound. The One Show all began from an idea about what ONE motorcycle we would want if that was it – if we had to pick the one. It’s a subjective idea, which means that there are little restrictions in the style of bike you’ll see there. Completely wild builds that seem more like an art sculpture than a working machine sometimes, and others a vintage race bike in pristine condition. Year five was even more impressive than each year before, both in curation and in attendance- despite gnarly weather. Impressive to say the least. Make your way to Portland next February for the sixth year of See See’s One Moto Show, and be awed by a big time show put on in a small town (well, smallish).