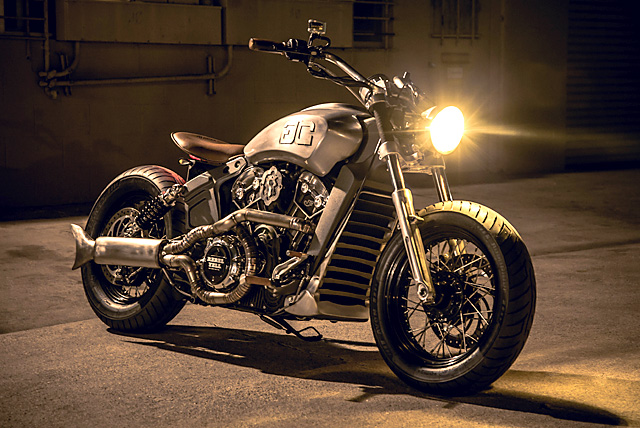 For the first half of the 20th century, the Indian motorcycle company was flying high. They took all three podium spots at the 1911 Isle of Man TT, won the very first Daytona 200 in 1937 and so good was the handling of the Scout 101 that it was used everywhere from hill climbs to dirt track and is still the bike of choice for wall of death riders the world over. But when the company went bust in 1953, the only achievement of note for the next half century was Burt Munro’s famous 20’s Scout breaking land speed records. But when the giant automotive company Polaris acquired Indian in 2011, fans of the marque could smile; finally Indian’s would be built right again and when Adam of Gasser Customs was called upon by Rebel Yell to build them a custom bike he picked a 2015 Indian Scout, nicknamed it ‘The Outlaw’ and has knocked this build out of the park. Adam Gaspic is one of the elite builders in the custom bike industry, a certified mechanic in both the USA and Canada he has also achieved his Masters in Technology and completed a 9000 hour apprenticeship program. So not only do his bikes look the goods he offers his customers a level of ride quality rarely matched in the industry. So good in fact Jay Leno had him on his show and waxed lyrical about the quality of Adam’s Honda CB750 build compared to most customs he’d ridden and Jay’s experienced just about everything in the automotive game. So when it came time for this build Adam knew exactly the bike he’d pick “We wanted to use an American brand motorcycle to represent the American spirit of Rebel Yell and the new Scout model is a bike we’ve wanted to build our way for a while now. The beautiful cast engine was one of our favourite things about this motorcycle. This build is a blend of a 2015 scout with a 1937 Indian, modern with vintage details.” The styling DNA of the original Scout is clear to see in the all new model but Gasser has taken it more than another step further. The big factory tank has been stripped of its new paint and the raw metal shows off the stunning lines to finally reveal the master piece that the Indian design team created. To give it a custom touch the Gasser Customs logo has been cut out of stainless steel and then welded on to each side where the Scout badges once called home. To protect the tank from oxidisation and give the raw metal a smooth finish the whole lot has been sprayed in a protective clear coat. With the tank making such a bold statement it’s been further accentuated by a stainless steel radiator guard that was hand-built by Gasser and replaces the factory plastic piece. “This build also features a custom drilled drive cover and a lot of brushed stainless throughout to give the bike a raw rebellious feel to it.” If the new Scout goes too far in the vintage direction it is probably the use of the old school styled fenders front and rear and it seems Adam agrees, as he’s ditched both. Not only does it open up the machine visually to show off its impressive mechanical features, the simplified lines give a far more aggressive feel. But there is one slice of heritage that just never gets old and the tractor style brown leather solo seat brings in some of the ’37 vibe and mates to the raw tank perfectly. Being a build for a big company Adam had to incorporate some of their branding, but where most go over the top to the point of tacky the Gasser build gets it just right, “The foot controls were also wrapped in brown leather to add some more of the Rebel Yell colours into the build. Brown posh grips and a vintage style yellow headlight also serve to represent the brand colours. As well we custom-made both Rebel Logos for the engine and side covers.” That engine is of course the all the 60 cubic inch V-Twin 100hp donk from Indian, and although it retains brutish classic looks it is packed full of technology that make it an incredible ride. Liquid cooling, four valve cylinder heads and a partial dry sump help the bruising banger make a monstrous 100nm of torque. But it’s the way it does it; full closed loop fuel injection means you get all that grunt in a smooth as silk delivery with ride by wire throttle. But production bikes come with compromises and here Gasser has stepped up to fill the void; the incredible hand-built exhaust contains a total of 90 individual welds. The stainless steel system completely does away with all stock components and left unpolished you can appreciate the true craftsmanship of the fabrication. The headers have to be some of the nicest ever made and to finish the system out in true Indian style Gasser also built a custom stainless fishtail style muffler. To get all those Indian horses to the ground Adam had Hagon make a new pair of custom adjustable rear shocks that bolt to the all-new cast alloy frame. The front suspension utilises the Indian 41mm telescopic forks but stripped of their paint and reflectors and left in raw metal they match the rest of the industrial theme. The triple trees have been given the same treatment, taken back to bare metal, it’s a clever way to ensure a uniform look throughout the build without spending a cent. The standard cast alloy wheels don’t really do even the standard Scout justice so Gasser have done it right and started with a pair of custom hubs. These are laced with stainless steel spokes to black powder coated rims that have been wrapped in beefy Avon Roadrider rubber for a tough as nails appearance. The standard disc brakes remain front and rear, fitted to the new hubs, but giving them some extra power is a Brembo master cylinder with a Rizoma clear fluid reservoir. With so much effort taken to get the look just right, small functional details are top of the line, Rizoma turn signals and a custom stainless steel license plate bracket with an integrated brake light. Before it was handed over to its new owners Adam made sure it was functioning as it should and everything was absolutely perfect, it’s this extra care that had Jay Leno praising his ability to make a 40-year-old bike ride like new. “This latest Gasser Customs build ‘The Outlaw’ rides incredibly thanks to the newer upgrades and really turns heads wherever she goes. We had a blast building this bike and working with Rebel Yell.”