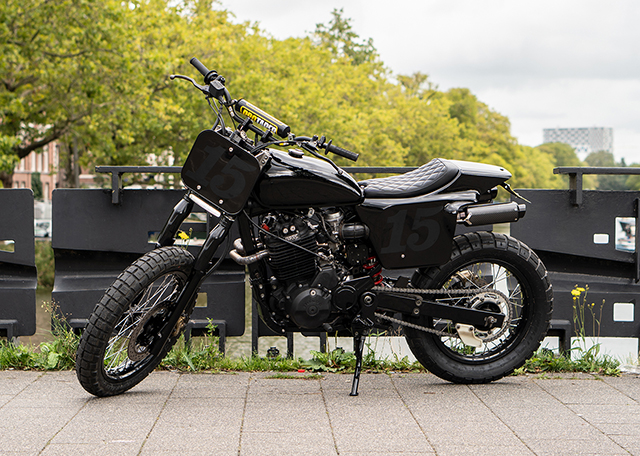 In the heart of Amsterdam resides a small moto shop called Rusty Gold. Inside you’ll find a plethora of vintage and custom motorcycle parts, accessories, riding gear, and the self-professed “meanest coffee” in town. The shop was started by Zoran, who decided to chuck in his advertising job to start this new adventure with two of his mates, Martijn and Kars. “Our custom workshop is hidden away in the basement, bit like the Batcave,” Zoran tells us. “The bikes enter via a lift we built, hidden away under a carpet.” One day, Zoran’s friend walked in for a coffee and a chat after he had just sold his custom Honda CB750. They started talking about what bike he should get next. Since he used to ride dirt bikes competitively, he always had a soft spot for flat trackers. “A flat tracker with attitude is what we ended up at.” The only question now was who would build it? “How about you guys build me the bike?” 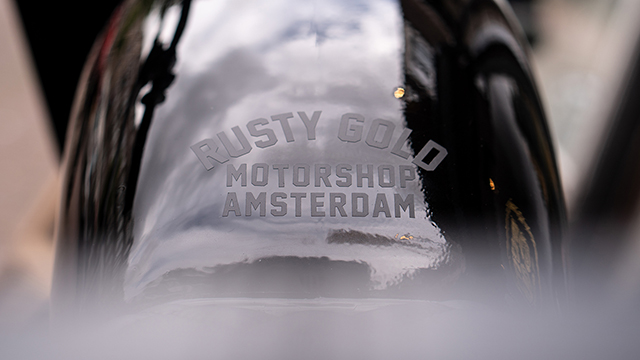 Then the hunt began for the perfect donor bike to use for the project. They landed on a Honda SLR650, which is like the smaller, lighter brother of the NX650 Dominator. With the reliability of the Honda single cylinder air-cooled engine, they thought it would be perfect. “We bought the bike from a Dutch version of Craigslist,” says Zoran. “Surprisingly hard to find, since these bikes are a popular base for customs lately, and not without reason. They look very dull stock but are a blast to ride, super reliable and cheap and easy to maintain.” 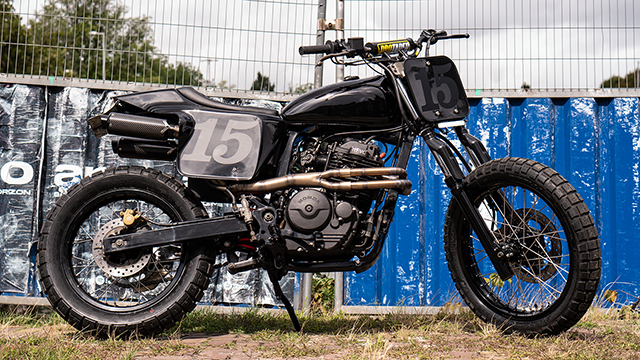 The guys at Rusty Gold started with the custom subframe to mount the seat unit to. A complete custom exhaust system with small carbon mufflers was cut and TIG welded together out of stainless steel by Martijn. New stainless steel spoked wheels were also custom built by Ralph from Spokeman, which were then powdercoated black. 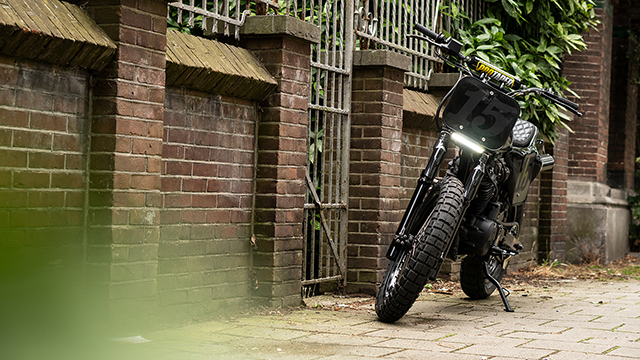 The inspiration for the bike was a mix between flat trackers and dirt bikes, so they sourced a classic fibreglass flat tracker seat – it was originally designed for a classic XS650. The beautifully crafted seat was upholstered by Silvermachine with a traditional diamond stitched pattern. The tank is a vintage moped unit that was the perfect proportion and only needed a little bit or work make it fit right. To give the bike a bit more of a modern feel, a number plate with an LED headlight bar was made for the front, making the bike visible even in the darkest of Amsterdam alleys. 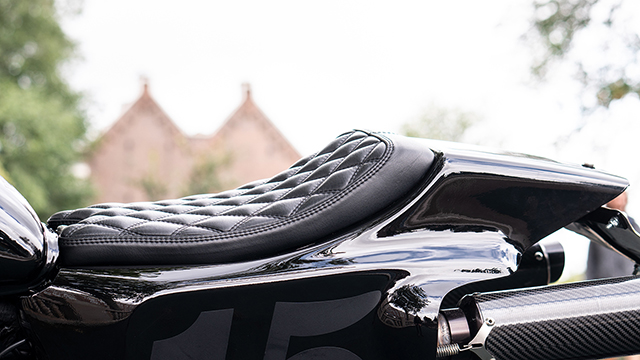 A complete new wiring loom was made and minimal Motone switches were added as controls on the Protaper handlebars. The original engine was given the once over, cleaned, checked and painted by Kars. He also gave the tank and the seat a layer of glossy black paint to finish the build off. 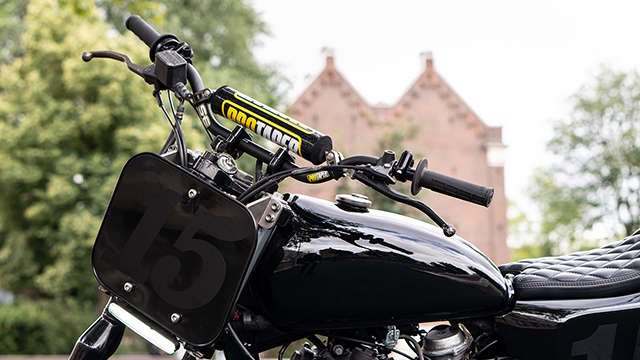 The end result is a reliable ‘street ripper’ that looks like it would be a blast to race around the roads of Amsterdam on and is also capable of eating up some country dirt. The project ended up being more challenging than Zoran first expected, running a moto retail store while building the bike in the basement: “So yes, we worked lots of late nights, but hey, it was all worth it in the end.” 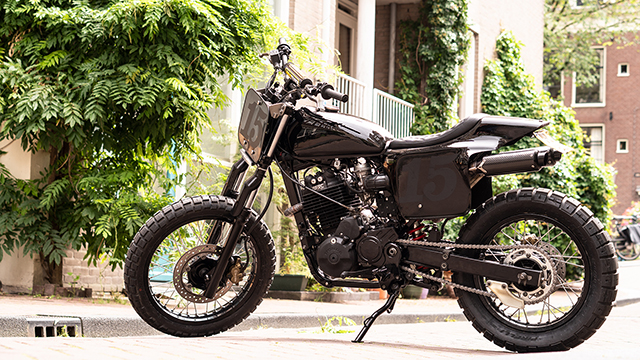 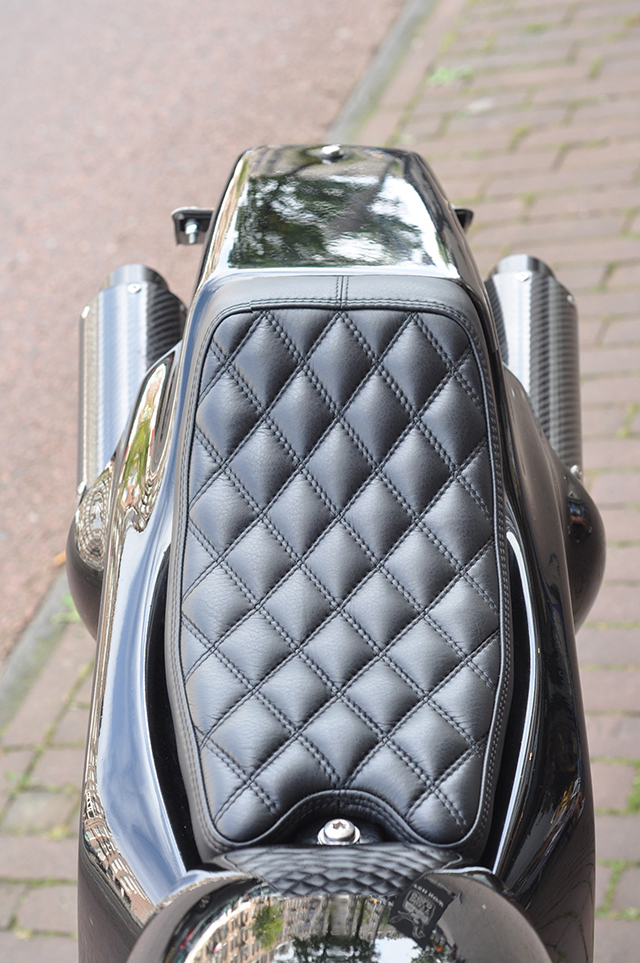 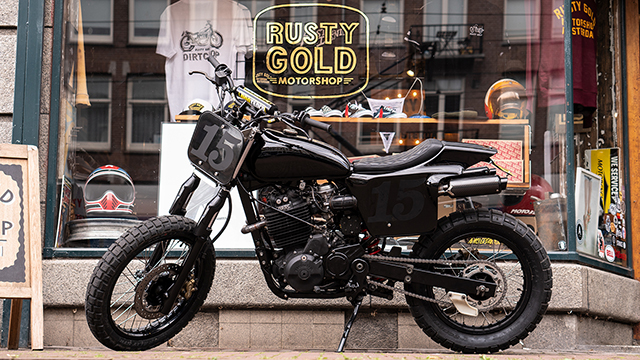