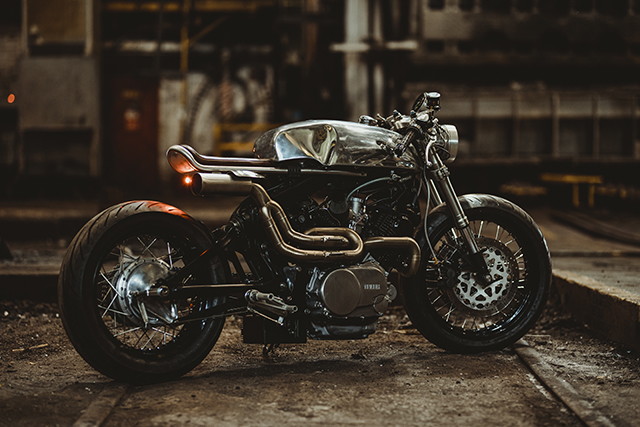 Tributes can take on many forms, the words offered at a funeral or a photo that lives on the wall. But there are others whose lives demand so much more, having lived the maxim, ‘Carve your name on hearts, not tombstones. A legacy is etched into the minds of others and the stories they share about you.’ Having walked in his older brother’s influential shadow, often just making the tea that fuelled both stories and bike builds, Alec Birkbeck knew his ultimate eulogy had to be forged in steel. With guidance from above and a desire to live up to his brother’s natural gift, it’s a stunning Yamaha TR1 just for Kevin. 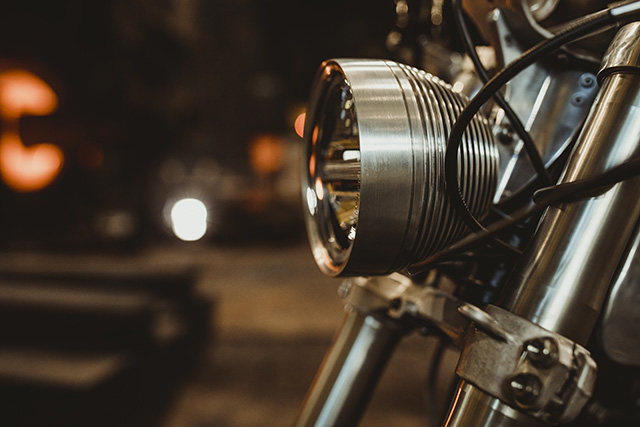 “He just had a natural affinity with motorbikes both in the mechanical sense and in his ability to ride them,” Alec told us of his brother Kev. “I often remember coming home from school, finding him in the workshop with motorcycle parts strewn across the floor. I would usually just make cups of tea and listen to stories of his grand plans for the bike”. As they grew older Kev established a sizeable metal fabrication business, and Alec became an industrial designer for a large international company. Yet still they’d occasionally come together in the workshop over a brew, Kev still building his bikes and Alec admittedly wishing to do the same. 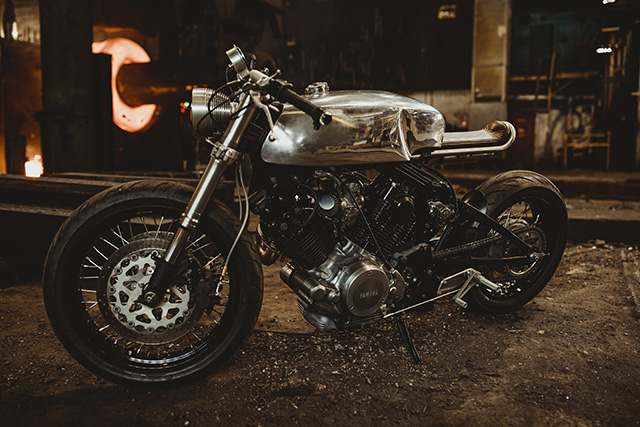 After a long battle with kidney disease and a heart condition, Kev sadly passed away. “After his funeral, I felt the need to do something more memorable than just putting a photo on the wall. Something that Kev would have really appreciated. In a way, I think I needed to have one last chat in the workshop with a cuppa, next to a cool bike.” His brother had built some beastly Harley’s, but the plan was to go for something different and still with a V-Twin the TR1 fit the bill. A few months of trawling auction sites filled with butchered or basket-cased bikes, a one-owner, stock version appeared and Alec knew that he had to have it. 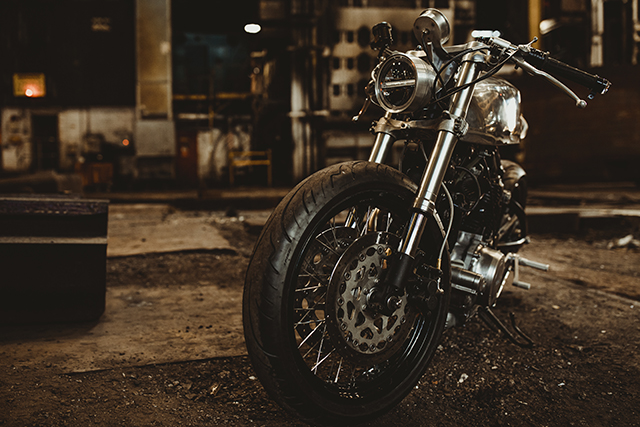 On the first go “it fired up; well sort of, it only ran on one pot, and upon closer inspection the rear carb bowl was filled with thick yellow sludge.” But the starting point was sound and with the unwanted parts sold off on eBay Alec managed to make back the purchase price plus more. Not wanting to copy what had been done before, there’d be no Benelli tanks here, but the cafe culture played a big influence. “My dad was an original cafe-racer and I enjoyed listening to his stories of hanging out at places like The Ace Cafe. Now, in my pursuit of simplicity, performance and weight reduction, I started to form some ideas.” 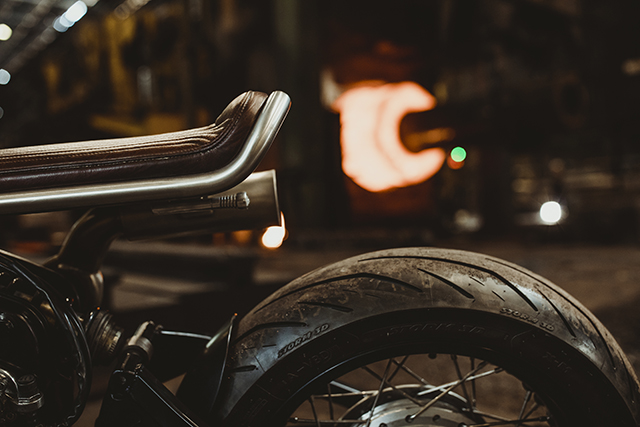 The mainframe is left relatively stock, but with the airbox function removed Alec had the perfect place to hide much of the wiring. A custom battery box keeps the lithium-ion item out of the way and achieves the same clean look Kev was known for. The frame might be relatively untouched but the stock subframe was ditched for a simple cantilever piece, CNC formed from 1” x 3mm wall SS tube. This created a clean horizontal line and opened up the space around the old Yamaha monoshock. 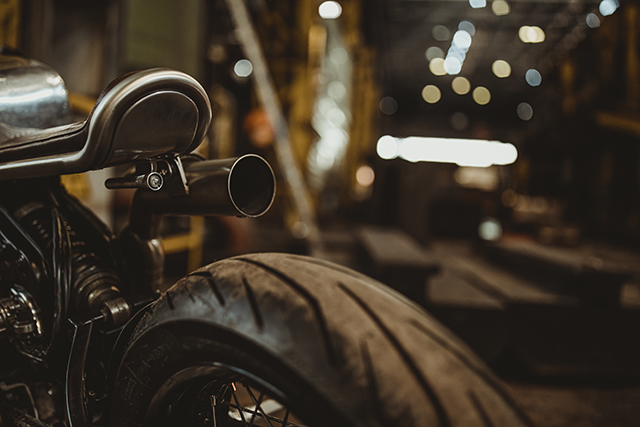 The tank was something Alec was hoping to build himself, but the disappointing half-finished item that resulted quickly had him on the phone. He found TabIIClassics who produce incredible alloy units but wanted the entire bike for 3 months. Not having it, Alec spent a weekend making a mock TR1 frame with working headstock out of scrap wood and they agreed it would do. Finally, with the finished tank back in his hands the Rickman styled piece was up on the frame and with the classically stitched leather seat by Ed of Core Motorcycles, the vintage beauty becomes impossible to miss. 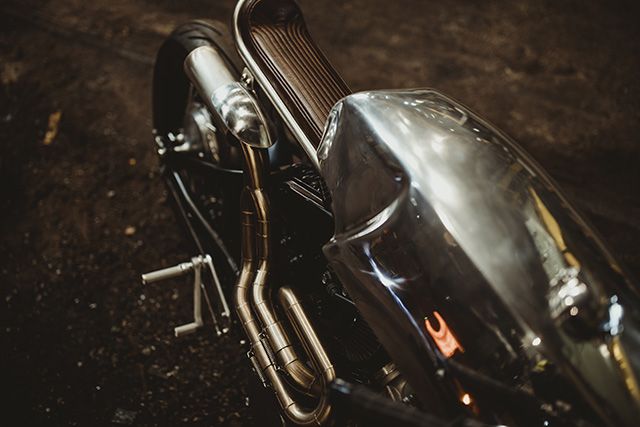 The wheels had to be spoked and a combination of a 70’s CB750 rear hub and Goldwing front were selected before being laced with quality stainless parts and wrapped in Avon rubber. “Front forks are from a Fireblade, and I am so pleased with them. I didn’t start with these forks though. In fact I made a big mistake the first time around,” Alec explains. The initial combination of GSXR USDs and R1 radial calipers ran way too close to the spokes. Sadly a beautiful top clamp had already been made and with the machinist refusing to go again, Alec searched till he found a combo of Fireblade forks and SV650 calipers that would work with what he had thanks to a new pair of home-made mounting brackets.

“So much staring and tea drinking was invested into the exhaust! I mocked up some ideas with 40mm waste pipe leftover from our house build project. I delivered the half-finished bike and plastic pipe to Shane at STG exhausts. He seemed to like that it was pretty much designed and his TIG welding skills are off the chart.” The high end can gets laser-hot, so it required some serious shielding. Not wanting to detract too much from the simple exhaust shapes, Alec made his own two-skin SS heat shield which we are told only gets lukewarm! 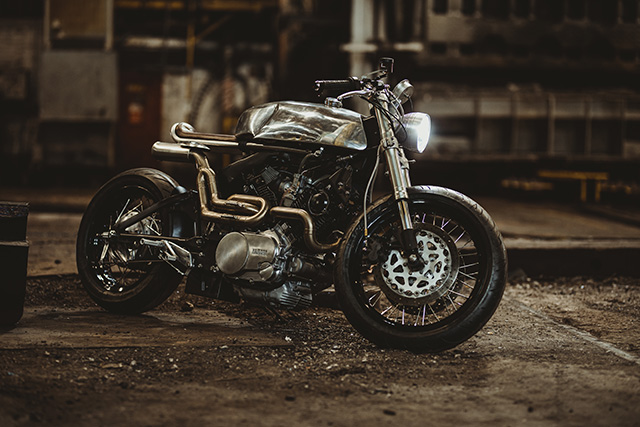 Alec then swapped out the factory carbs for Mikuni VM38’s, and paired them with one-off curved pod carriers, coated in industrial heat-shrink. Having laid the basics it was then a first-ever full rewire for Alec, based around a Motogadget m-unit with the M-lock chip fitted inside a worn leather wrist strap. The old TCi ignition was replaced with a programmable CDI from Ignitech, with HP and Torque now up 10% and weight down by 40kg to a slender 190kg. The low COG, balanced weight distribution and horizontal stance make this bike’s handling compliant, predictable and fun. 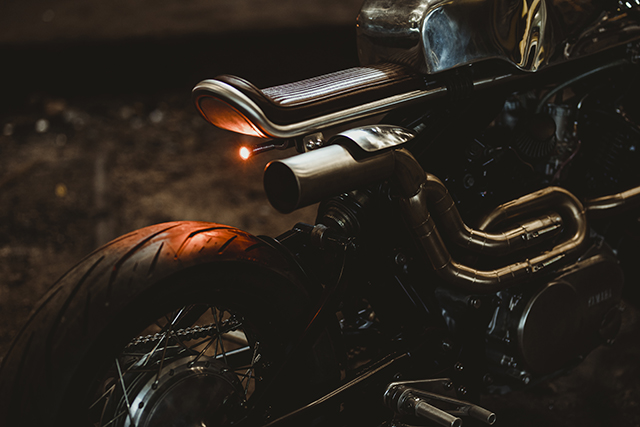 To finish out the bike Alec hand made a host of parts simply too numerous to list, but the front and rear lights are a great source of pride. He machined them on the lathe of “Pete Goodwin and Phil Meggett of Carrot Cycles, who are by far the most knowledgeable and helpful pair of bike enthusiasts and builders that I have ever known.” Alec smiles, recalling their tremendous help during the build and the associated mandatory heavy drinking sessions. 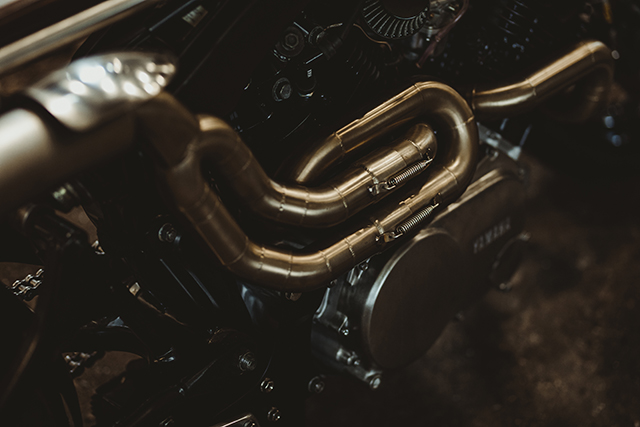 On the anniversary of his brother’s death the TR1 was ready for its first shake down, “I can tell you, that very short ride, up and down my street felt like the best ride I’d ever had.” Kev and Alec’s wonderful Mum, Frances sadly didn’t get to see the bike completed, but you can imagine her pride as little brother stepped out of the shadow to build a TR1 tribute for Kevin, his story now cemented for the world to see! 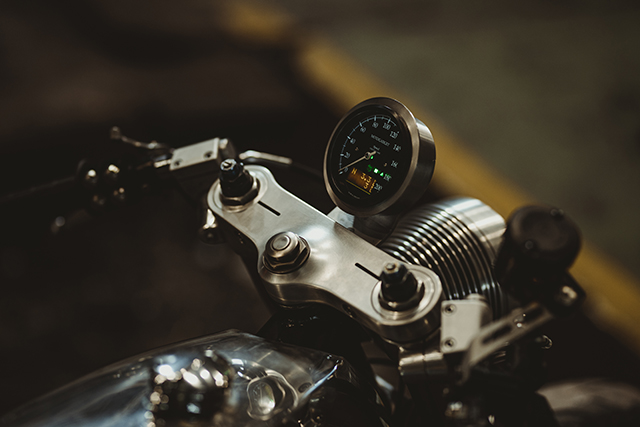 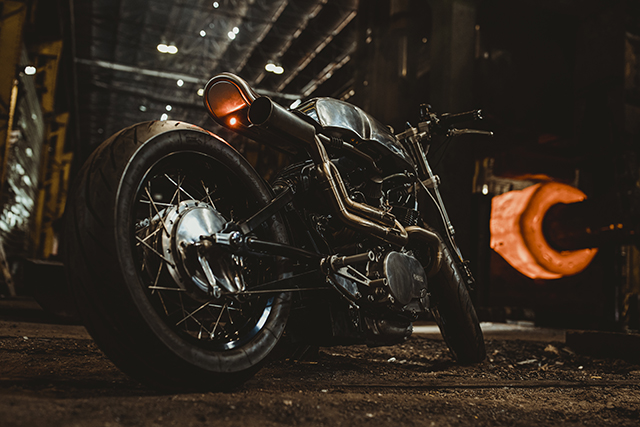 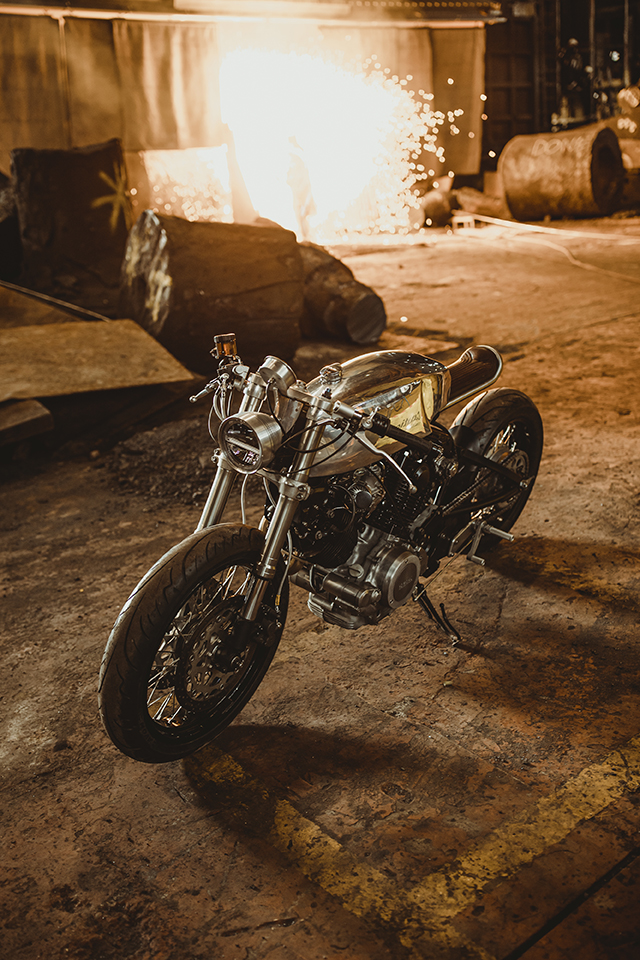 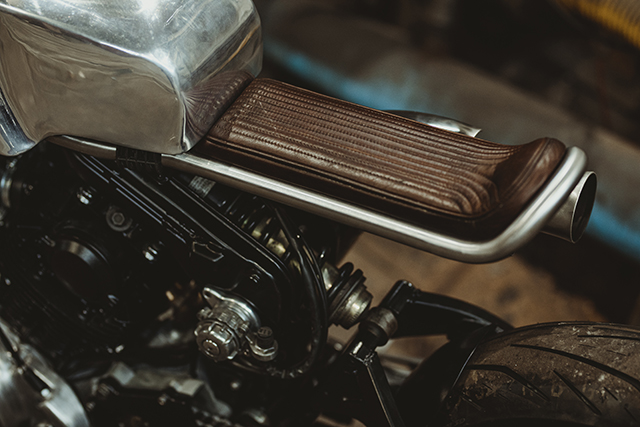 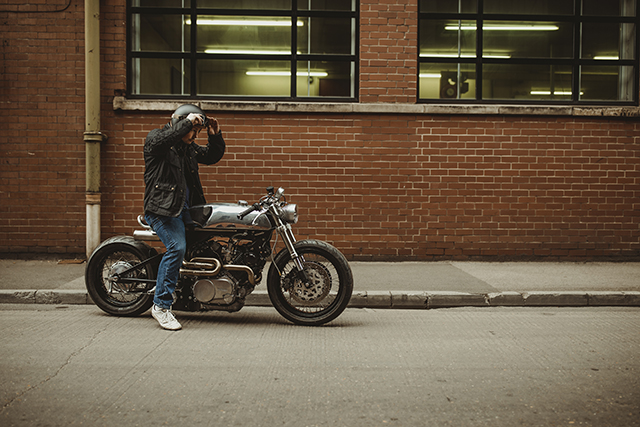 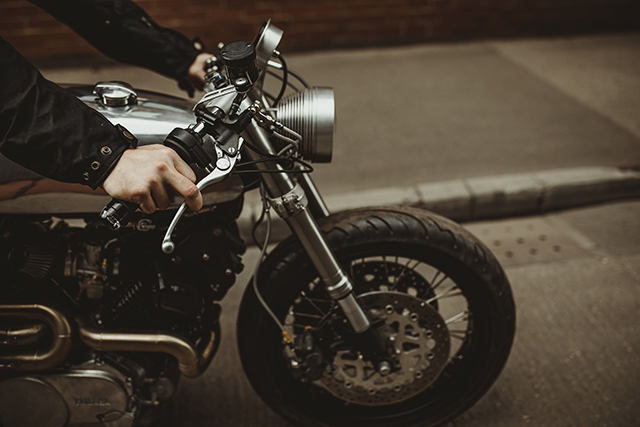 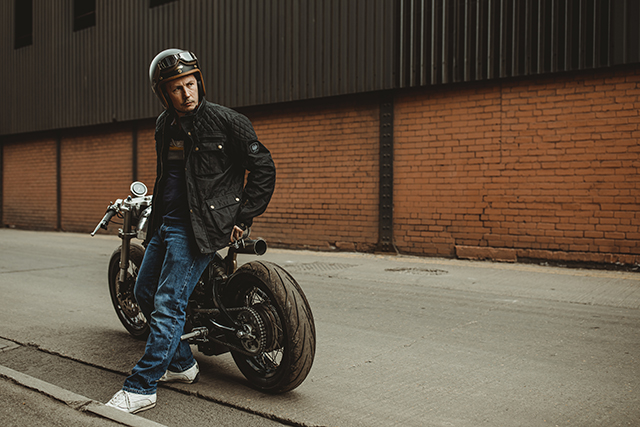 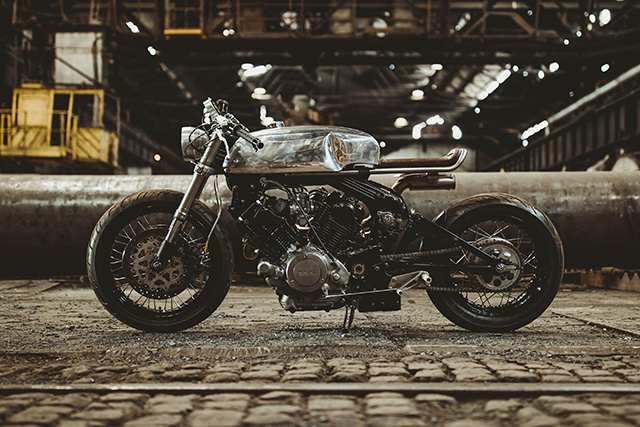 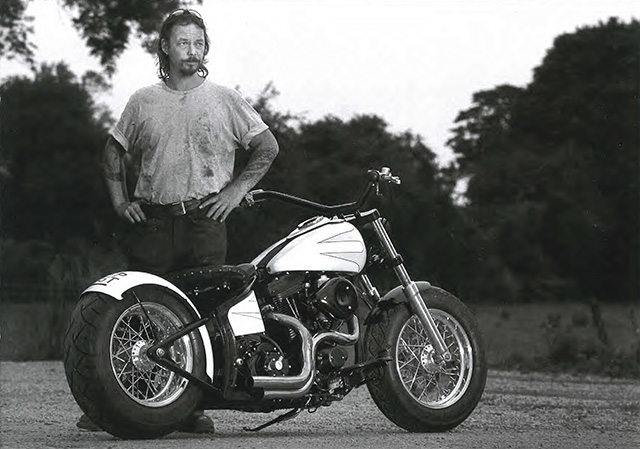 The above picture is the man himself. Kev is now in a place where there’s long and winding roads for eternity. Godspeed legend.