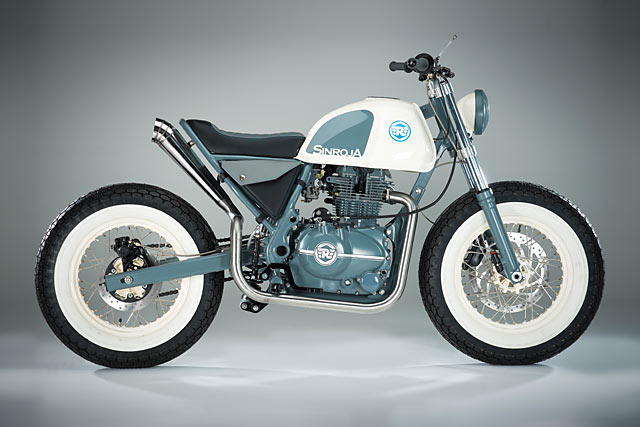 Royal Enfield is on a mission of late, to take one of the world’s oldest marques and push it back up the motorcycle food chain. Firmly in their sights is UK powerhouse Triumph with a number of key personnel recently poached for Enfield’s future expansion. However in the meantime the introduction of the Himalayan gives the company an incredibly priced entry into the highly competitive Adventure bike class. A type of machine that rarely gets modified, short of throwing on heated grips, panniers and other such purposeful yet uninspiring additions. But someone forgot to tell Brothers Rahul and Birju of Sinroja Motorcycles who have dealt their second ace to complete a pair of pocket rockets, this time a custom Himalayan for all occasions, meet The Gentleman Brat. Alongside their incredible Continental GT known as the ‘Surf Racer’ this bike is part of a one-two punch built for Royal Enfield for the Wheels and Waves festival. Building any custom bike for a large company is a daunting prospect, two seems like inviting heartache. But totally unphased the Brothers not only took on the challenge but set their sights on becoming the first company to really go to town on a Himalayan. It’s a bike that defies belief even from the factory floor, a purchase price as low as a ¼ of some of its competitors. Yet it still manages to achieve everything you could want from an adventure motorcycle, with the sort of reliability to take on the world’s highest peaks. So how do you go taking such a bike and turning it into a head turning show machine that rides brilliantly on every surface? That initial design concept was the one part of the build that did test the unflappable Sinroja lads, “In all honestly the build was really easy and straightforward. The hardest part was probably the design and concept. Once we nailed that we sort of sailed through.” What is truly remarkable is that for a bike nobody had ever tinkered with the design drawing and final product are almost indistinguishable! It’s a level of talent very few possess, their combined skill set allowing them to conquer any challenge they faced along the way. With the brand new bike up on the bench they started to pull off all the bits and pieces that had no place on a stripped down fun machine. Part of improving performance was to get as much weight off of the bike, as well as cleaning up the overall aesthetic. The rear subframe has been drastically cut back, with the stock item designed for two up plus luggage it was no small affair. The new piece goes to the other extreme, beautifully integrated into the factory frame; it leaves a clean and compact finish. A Single piece of metal fills the gap below giving a mount for the muffler and the tidiest of tails. Along with the swingarm the entire frame has been cleaned up, de-tabbed and smoothed out before being coated in the industrial grey chosen to reflect the ruggedness the Himalayan represents. The tank is the factory fitted item, but even it came in for some Sinroja love, with the welds ground down and the lines smoothed out. While the addition of the grilled out headlight gives the bike more of that tough and dependable vibe that an adventure bike truly embodies. Along with the frame it and the tank were sent off to Black Shuk Kustom’s to lay down the gorgeous creamy white and industrial grey colour combination that envelopes the entire bike.

This gave the boys a chance to work on the seat, perfectly following the lines of the frame the fit and finish is first class. Stitched in colour matching materials it provides a uniquely custom look with the level of comfort you’d want from a bike you’d never get tired of riding. But not done with the leather work a clever pair of side pouches sit neatly inside the frame. They add a level of sophistication that takes you back to a different time, as well as adding a level of practicality you rarely get on any custom motorcycle. But as good as it looks The Gentleman Brat had to be a bike you could ride anywhere and would want to everyday of the week. So to elevate the suspension into that rarefied air a set of front forks from a Ducati 851 add some extra beef. Their addition was made possible thanks to the stunning set of aluminium triple trees milled up by the good folks at Fastec Racing. While the Brembo brake inspires the sort of confidence you need when the back roads are urging you to keep twisting the throttle.

[superquote]“Of course, great suspension is not a lot of fun without some extra ponies to add a smile to the dial”.[/superquote]

Suspending the factory swingarm and adding real precision to the equation is a Hagon fully adjustable rear shock, so the bike can be dialled in for any rider. Of course, great suspension is not a lot of fun without some extra ponies to add a smile to the dial and even though it was brand new the engine was stripped to every last nut and bolt. This allowed it to be painted to a Hot Rod level of detail while the EFI was stripped away. A carburettor is used instead that reduces the amount of wiring drastically and allows for easier tuning. What wiring there is has been neatly hidden under the seat and the whole loom reconstructed by Towzatronics. Without any of the clutter the custom exhaust system is allowed to be seen from start to finish, as the brothers explain it’s, “made in house from single piece of stainless tubing giving it a seamless finish ending up with a GP style exhaust right in the middle of the bike to give it a compact look. It sounds awesome and spitting flames now and then just makes it all a lot more fun.” All those thrills are controlled by a quick action throttle mounted on the tracker style bars. Things are kept simple with grey grips, braided lines and high-end Brembo master cylinder/lever combination.

To finish things out the big wheels of the adventure based machine have been shown the door and instead a set of 16″ items laced up. This allows the fitment of truly chunky tyres from Coker and the whitewalls blend seamlessly into the colour matched wheels giving the combination an exaggerated feeling of size. It’s all these details, clever additions and knowing when to show restraint that leaves the final product such a visual pleasure to the eye. But what Sinroja have really done is display the potential lying beneath the Himalayan’s clothes; and all you want to do after admiring it, is jump aboard and ride it for days. It’s motorcycling at its most magnificent and in Sinroja Motorcycles, Royal Enfield has found a partner to take them to the highest peak on the globe.