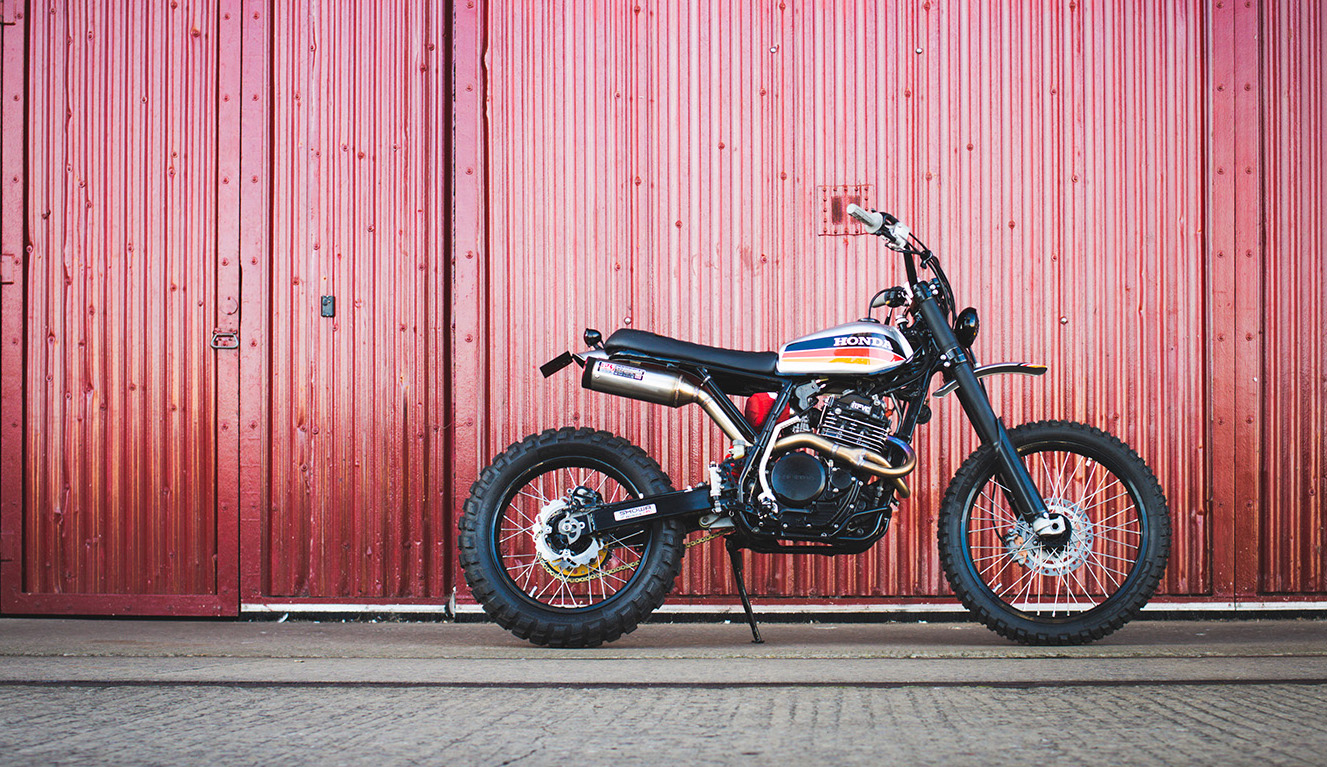 Hey Siri, show me a motorbike that would be insanely fun for ripping around on in the urban jungle and backcountry lanes. Here’s what I found…, enter, ‘Smiles for Miles’! It is easy to forget that while a motorcycle is a form of transportation what we really love about them is they’re downright fun. You can debate styling choices and exhaust wrap till the cows come home, but jump aboard and twist the throttle and all that really matters is how it rides and what it makes you feel. For Dan Ridge of Somerset, England, it was all about taking his love of flat track and putting it into an excitement inducing package for the street; and in producing this stunning Honda XR630R he’s ticked every box on the way to completing his ultimate thrill machine.

When the Honda engineers sat down to create the Honda XR range it was never intended to be as successful as it was. They weren’t shooting for the stars on this one, in many ways it was supposed to be about entry level off-road fun. Keep it simple, make it bulletproof and leave the razzamatazz styling to the other manufacturers. But decades of incredible sales numbers, icon status, Baja 1000 wins, and now a darling of the custom bike scene, those old boys can sit back and know they did one hell of a job.

For Dan, the XR would create the perfect base for some hooligan fun, in a package that looked damn good doing it. And just like those Honda engineers decades ago, the result he’s produced exceeds expectations, and does everything very, very well! To start the build the bike was pulled down and the chassis cleaned up to get it back to its factory best. Then with grinder in hand, a cutting disc was spun up and the subframe liberated before a new minimalist piece with a hooped tail was fabricated and welded into place.

To transform the handling the appropriate modifications were made so a modern set of forks could be fitted to the frame. Slotted in is a Honda CRF450 front end, with the new forks modified internally to stiffen them up for their new focus of road riding, as well as being lowered to get the overall stance of the bike right. With the endless array of aftermarket parts for the CRF means future upgrades are only a phone call away should Dan so desire.

At the rear end, all new linkage seals and bearings were thrown at the XR to have the Pro-Link operating like the day it left the factory floor. With the rear shock itself fully rebuilt to bring it back to new condition and fitted up with a stiffer spring to match the front end. The 21in front rim is also taken from the CRF, with the hub blacked out before being laced up with new stainless spokes and nipple. At the rear, a new wave pattern disc and sprocket go on before the rebuilt 18in rim gets the same treatment as the front and both are wrapped up in Michelin Anakee rubber.

With the foundations taken care of, it was time to play dress up and the looks of the big ole XR are dramatically improved with the fitment of a 1979 XL175 tank. The move from plastics to metal continues with the front and rear fenders; the minimalist tail unit hosts the brake light, while the front fender is mounted to the underside of the bottom yoke in true MX style. “The professionally done paintwork is classic Honda silver with Honda Sunset Stripes,” Dan told us. And with the accents also applied to the fenders, it all ties in with the red shock and black leather seat for an ultra clean look.

Of course one of the primary reasons you turn to the XR is that beautiful RFVC single, which delivers bags of torque and is surprisingly smooth in revving out to redline for an engine of this configuration. But Dan needed more and helping to bump up the power is a rebuild with a 630cc big bore kit. To feed the fire a performance cam goes in and it’s all fuelled by a big Keihin FCR41MX carb with a performance K&N filter. The exhaust is a fully bespoke system to suit, which looks as good as it sounds and the carb has been jetted to provide the extra juice.

To give Dan full control over his creation the top yokes hold super-wide flat track bars and a simple but modernised Trailtech computer, a quick-action throttle and Pro Taper levers. “The manual decompressor lever has moved to the right side as the bars are so wide the cable won’t reach to the left! Intuitively it works well on the throttle side engaged with your thumb as you kick start the bike,” Dan grins. And with the small 4in yellow lensed headlight shining the way, all that is left to do is pin the throttle and not stop until the tank hits empty, on the way to “Smiles for Miles”!