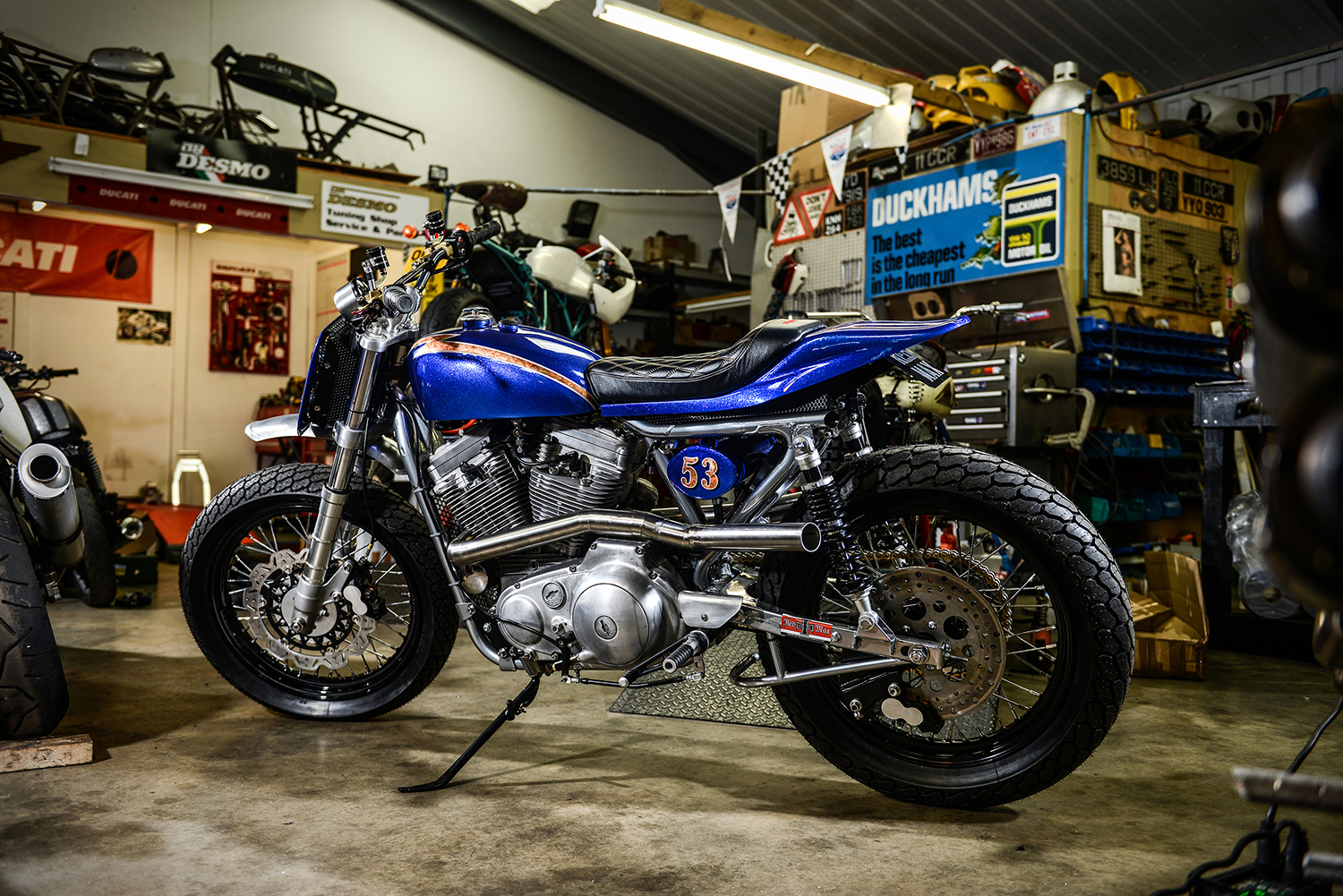 Whether you’re looking at a big dollar bike parked up at a show and shine or flicking through the internet scoping out some crazy customs, at some point any true biker is going to ask themselves; I wonder how it rides? This takes on even more importance when it comes time to lay down your cash to have a shop build your dream machine. Thankfully Red Max Speed Shop in Devon, England, take out the guesswork with decades of motorcycles that have been killing it on track and out on the road. Their latest build speaks to their specialty in flat track and this HD Sportster 1100 called ‘Andrea’ has been given all the fruit!

The head honcho at Red Max is Steve Hillary, who has one of the most impressive resumes in the entire custom bike building world. He’s owned a bunch of workshops over the years, built championship-winning drag bikes and was one half of the highly successful Moto Rapido outfit. But these days his Speed Shop in the UK’s southwest are the leaders in the country’s flat track racing community; they build them, they race them and they have a hell of a lot of fun along the way.

This particular machine came to be when a returning customer desired another RMSS custom. “Roger wanted something different from the BMW Scrambler we built him 2 years before and found a dismantled Sportster 1100,” Steve tells us. But the relatively rare sporty was not at all in good condition, the motor was full of water, the frame was rusty and they were the only bits salvageable. Inside the engine Steve and his team found the timing was all off and had them scratching their heads at just who had thrown it all together.

But with the Harley to be displayed at the Bike Shed Show there was no time to waste and they got down to doing what they do best, building killer customs! To give them a solid foundation with which to work the frame has been cleaned up and the swing-arm tig welded with extra bracing. Now they could put together the rolling chassis and the front end comes from a Triumph Speed Triple and 4 pot brakes chosen not only for the front but also made to work on the rear. While the wheels start as a pair of Harley spoked hubs, laced to 19in rims and wrapped up in Mitas flat track rubber.

The 1100cc engine is essentially a big bore 883 with larger valves to match and in factory form delivers an extra 10hp. But starting with the exhaust began the quest for more! “There is always an ‘ugly’ side as both pipes come out on the right of a Sportster, so Roger wanted two matched pipes from the rear and we devised this solution bringing the rear pipe forwards under the front and out the left side. Cool as!” Steve smiles. Then to feed the fire a massive flatslide carb was fitted up and with the engine tuned, she’s got a lot of poke.

To build the bike back up, the frame has been given a silver-plated look which is actually a powder coat laid down by mate of the shop, Andy at Trestan. Then to get the aesthetics right, both shop and client worked together, “We decided that we’d use a BSA Lightning scrambles tank Roger had and mate it to a Bultaco Astro seat from stock to get the look we were after.” Upfront a high mounted guard is affixed to the bottom yoke and the AMA alloy number board has been modified to accept a dual projector headlight setup.

“The blue paint was a throwback to an AJS I’d seen years back with lightning strikes, updated by Joeby (of Joeby’s Airbrush Art) with copper leaf and deep metal flake finish.” The look is incredible and the detail flawless, right down to the ’53’ on the gorgeous oil tank with polished filler. But there is some cool tricks thrown in too, behind the number board is a spot for a phone with built-in charger and Glenn the workshops go-to man for upholstery made a pouch to suit, in blue leather with diamond stitching to match the seat and grips.

The brilliantly balanced match of old and new extends to the electrical system that brings the old Sporty into the modern era. The brains are from Motogadget, hidden under the seat and allows for the use of slick push buttons up on the alloy MX bars. While a GPS speedo unit does away with any messy drive system and cleverly integrated into the frame, the rear lights keep things ultra clean. A pair of rearsets from Tarozzi and adjustable levers finish out the build and allow the rider to feel right at home. The bike was to be known as Blue Pearl but tragically Roger’s wife passed away as the HD was nearing completion. Now known as Andrea it is dedicated to her memory, which lives on in this stunning rolling tribute to her life.