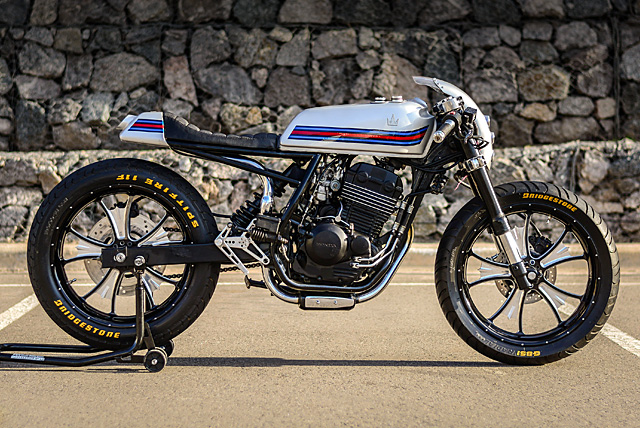 The majority of the world was largely ignorant of the passion for motorcycles that exists in Argentina until a small film called The Motorcycle Diaries was released in 2004. It tells the story of the legendary Che Guevara and his friend Alberto Granado riding their 1939 Norton 500 as they adventure throughout South America. Not only do you begin to realise the importance of a motorcycle to young Argentinian men as a rite of passage but discover that little repair shops dot the landscape. So nine years ago to feed this appetite for motorcycles, Lucas Layum founded Lucky Custom to serve up tasty two-wheel treats to the populace. But the Cordoba based shop doesn’t just tweak bikes here and there, they take everything from new Harley’s to old BMW’s and create one-off masterpieces. And so it is that a little 2011 Honda CBX250 Twister has become their latest creation with a build that’ll blow your mind. For Lucas customising bikes is everything “it’s my life and it is what I do, this and my family. Here in Argentina there are no catalogs or stores to buy accessories, so here you have to use ingenuity.” So why pick one of the most common commuter bikes in the country with virtually no redeeming features from the factory other than its cheap purchase price and reliability? Because Lucas wanted a challenge, he didn’t want to create yet another custom you could see anywhere on the internet and with the bike up on the stand he gave himself and his team just five weeks to turn out something truly spectacular. While the design largely flowed as the build progressed the theme of a futuristic build was set from the start, tired of retro styled machines this was a chance to explore new possibilities. “Everything is the same, I like to transgress, and I did not want to do more of the same.” But it was soon apparent that the CBX would need a lot more work than first thought to make this dream a reality. With the suspension height figured out it was decided the only way to get the long lean look they were after would be to cut the frame in half and do away with the entire back section. With this done the old tank they’d picked out for the project was mounted up and this would provide a reference point for the rest of the build. With the new tank extending past the rear mounting point of the original unit the newly fabricated rear not only had to support the seat but share common lines rearward with all the metal work planned. With the inward angle of the tank’s sides measured, work started on the fully tubular subframe that is welded to the backbone and the original lower subframe supports. To give the tank some more customisation two filler caps were added, offset to the right hand side to give the appearance of a dry break fuel system. The tank was then further modified, notched at the front to clear the USD suspension that was to follow and smoothed at the rear. That rear section of the tank now butts up beautifully to the black leatherette covered seat that Lucas designed and upholstered himself. It all sits on a custom seat base shaped from steel that is designed to allow the custom tubular subframe to remain visible. The rear hump was fabricated from scratch, largely mirroring the rear dimensions of the tank, with the inclusion of an exhaust exit at its centre and the bottom shaped to match the symmetry of the rear tyre; these lads sure can fabricate! But they weren’t finished there, Lucas had an idea for a truly unique headlight assembly, “The headlight is crafted from a fender off a 1981 Honda Dax, three LEDs were added to serve as headlights and an acrylic visor that was from an old helmet”. The visor come wind protection is affixed with an oversupply of hex head bolts from a modern sportsbike that gives a riveted effect perfectly matched to the industrial futurism of the build. Having set the height of the suspension from the very start Lucas used a set of USD forks from a Honda CRF 125. They’d been used in the beginning to give the team an idea of what was possible and given how good they looked they were always going back on the bike. But first they had to be drastically shortened and resprung, painted in black and a host of intricate modifications made for some special wheels to come. Out back the factory swingarm was taken back to bare metal before being refinished in frame matching black while the rear shock was modified to give the bike a flat stance and stiffened to prevent bottoming out on the new bodywork. Then it was time for those special wheels, contrast cuts from Performance Machine in the US, big dollar items that are worth more than a new CBX to begin with. But being designed for big Harley’s and the like they’re no bolt on item. For Lucas this was the most complicated part of the build, new bearings had to be designed, axles machined and adapters made to fit the braking hardware front and rear. With so much money and effort spent the rear sprocket and brake disc are both mounted on the left side so that when viewed from the right side both wheels reveal their entire face. Pulled off the bike again so that the bearings and other surfaces could be double checked for correct fitment they were then fitted up with a tasty set of Bridgestone rubber with yellow lettering. To get the Bridgestone’s spinning, the little factory 250cc Honda engine has been given a pep with a rejetted carb feeding from a foam pod filter. But it’s the exhaust that really gets the gases flowing; a one-off stainless steel system that runs under the engine, up past the swingarm and then under the seat pan before exiting out of the rear tail-piece. At first it was going to be left as a straight through system but the sound was simply too much so a baffle has been added under the engine to keep things neat at the rear. You may also notice two heat sinks sitting on the left side of the engine, at first they appear as if they could be factory components of some sort. But wanting to keep the rear totally clean and with the stock headlight removed they actually serve to hold all of the bikes wiring and battery: genius! Now just needing to make the bike functional a set of clip-ons have been added to the dirt bike forks and custom rearsets are placed to give the bike a sporty riding position. The black grips with machined ends give more of the industrial feel to the build and switches are limited to start and shut off; we have to assume the local law enforcement are fans and ok with no blinkers, who could blame them. Finally with nearly five weeks of incredible fabrication under their belt and a bike that was riding better than it ever had before it could be given its final touch. The paint is inspired by the Martini racing colours with deeper tones for a more aggressive look and the workshops “Crown” logos applied to the tank and rear end. Nicknamed “Tigra” it is not meant as the female sex of a very large cat but slang for one that is “bold and daring.” Which not only sums up this build but is exactly what Lucky Custom are all about, with Lucas telling us now the CBX is finished the next build is underway, a tracker with a turbo Harley engine; they sure are revolutionaries in Argentina!