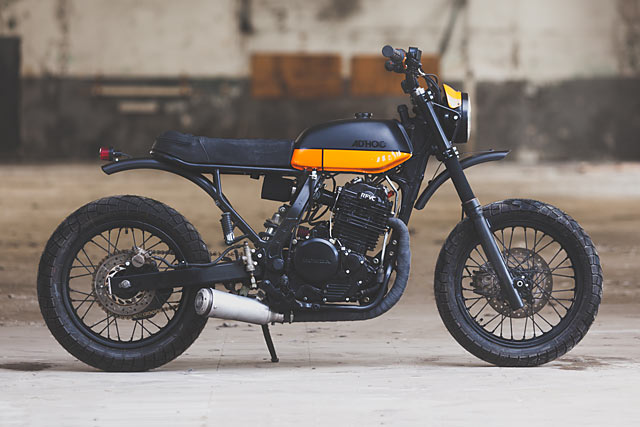 If you’re anything like me, moving house is right up there with wheelieing into the side of a police car or finding out your sleazy prog rock uncle now has a bike and is looking to joining you on your next group ride. The cleaning. The endless boxes and tape. The sheer amount of time it takes is always straight up nightmarish. Now imagine moving your custom bike shop. Suddenly it’s goodbye income, too. But far from collapsing in a screaming heap, David Gonzalez from Barcelona’s Ad Hoc Cafe Racers managed to find the time make this Honda NX650. David kicks of proceedings with a remarkably understated account of his past few months. “Ad Hoc #17, a.k.a. ‘Flush,’ is the Honda Dominator you see here. It is a project that suffered a small delay before being finished. We had to put the project on hold while we moved everything to our new workshop. But that definitely didn’t stop us.” Maybe David’s positivity stems from the fact that he’s always had a certain something for the little Hondas with the big name. “It is certainly one of my favorite recent projects,” he says. “Mainly due to the fact that I have wanted to do a Dominator custom build for a long time. There’s something that’s very cool about them, for sure.” Adding to this, David also notes that the creative collaboration that happened between himself and the bike’s soon-to-be owner was a good one. Nothing makes great happen quite like being on the same page. “The Honda NX650 was a very popular model in the 90’s. This one is from 1991: it’s a great base for a build, it has a very docile nature, practically indestructible mechanics, it’s simple to maintain and cheap to run. The trade-off is a less than impressive top speed, but as per the customer’s brief these are the perfect ingredients for an urban, ‘everyday ride’ bike like this.” The key point from the brief was to make the bike as compact and stanced as possible. This was achieved first and foremost by a substantial lowering of the front forks. “So we cut around 9 centimetres (3.5 inches) off them and then wrapped them with neoprene sleeves.” We may need to get out more, but that’s a trick we’ve not seen done too often before. “We have also reduced the front tire from 21 to 17 inches. It’s now 130 wide and the rear is a 140. Both are Heidenau K66s” Again channelling the idea of ​​a compact bike David chose a Honda CL350 tank thanks to its compactness. “We then painted it in a matte black and added two different shades of orange in gloss finish with matching colours on the visor and the headlight.” The entire subframe was then rebuilt, but with the lines closely following the original’s. Then it was off to the powder coater for a little electrostatic love along with the rest of the metal parts.

“One of my favourite features is the new cowhide seat,”says David. “We included a back pocket for knick-knacks; underneath is the battery and new electrics.” “Thanks to modern tech, this bike doesn’t have an ignition key. Everything is handled by a remote control. The speedometer is a Motogadget Tiny, the grips are from Oury and the handlebar is an Easton EXP.” In another nice touch that also contributed to the bike’s remarkable lack of visual weight, the pipes have been rebuilt to pass down and under the bottom of the engine, and their gasses are then expelled through an always-cool Supertrapp can. With the bike’s build time all but up and the end result none the worse for wear after the delays, David ensured all his hard work was good to go with fresh Uni filters and a pro carb adjustment to make the most of the new modifications. And then it was time to ride.