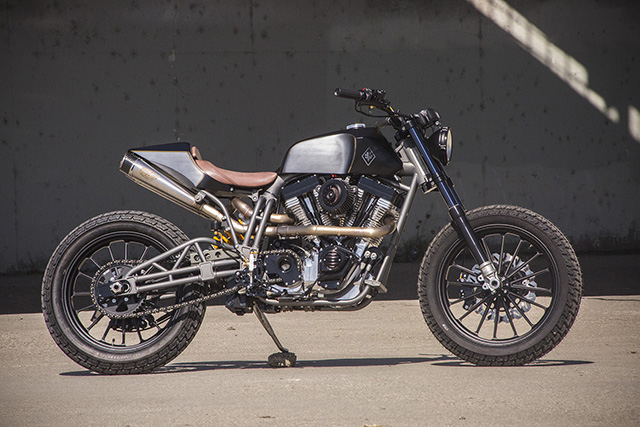 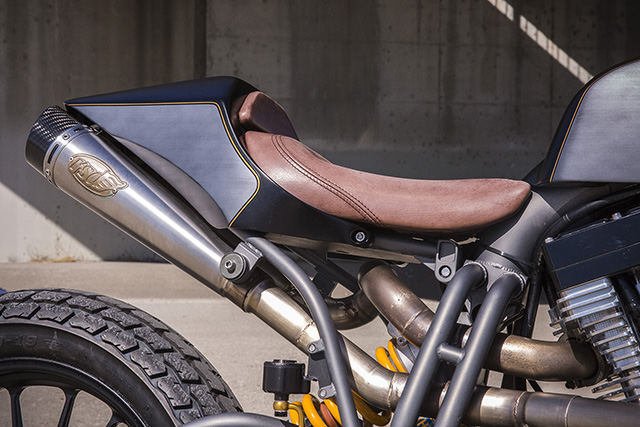 This isn’t RSD’s first foray into ultra high-dollar donor builds. In the past, the former 250cc champ has built a street tracker out of a Ducati Desmosedici D16RR, and a hardtail board tracker for “King” Kenny Roberts using a MotoGP-spec V5 from a Proton Team KR race bike. So, while the Ecosse project did require treading a little more lightly than normal, the work occurred gradually in two separate phases. 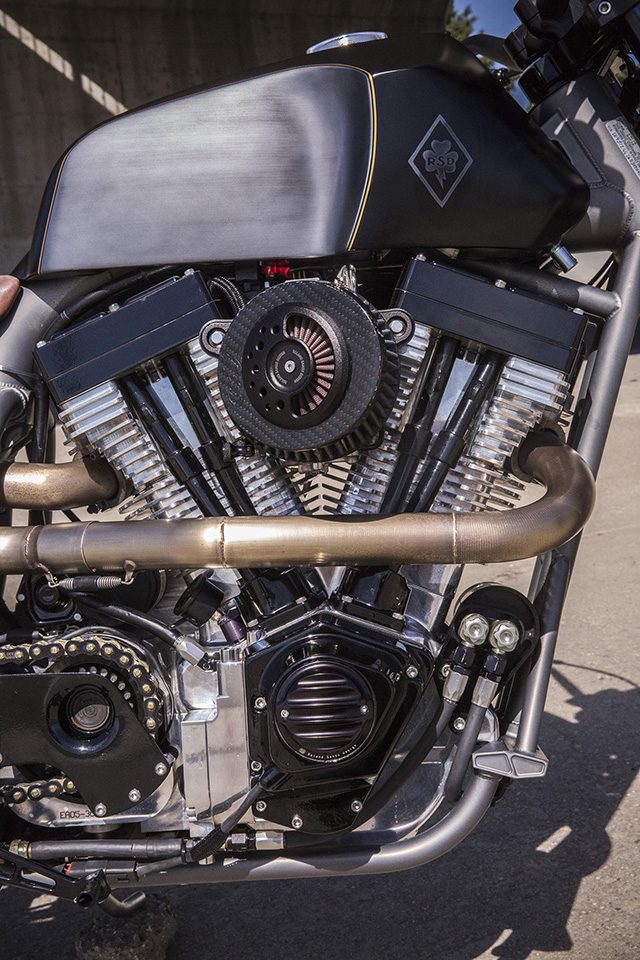 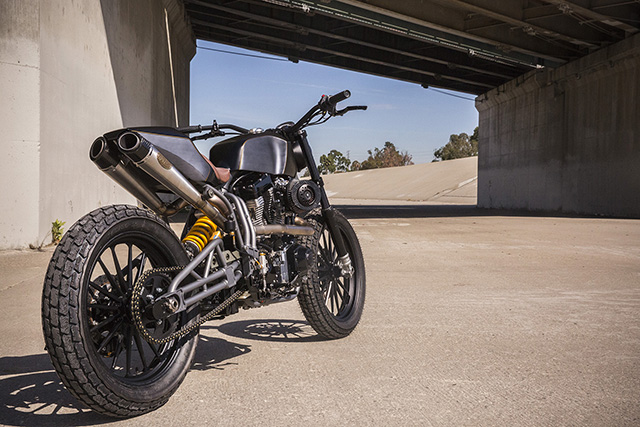 The stock tank on the Heretic TI didn’t allow much range in handlebar movement, resulting in an annoyingly wide turning radius. So initially, the top-shelf roadster was brought to the Los Alamitos shop for a new, narrower one-off tank. As often the case in situations like this, one idea sparked another, things snowballed, and pretty soon the team at RSD HQ was drawing up designs for a matching tail-section and a custom under-seat exhaust to go with the new fuel-cell. 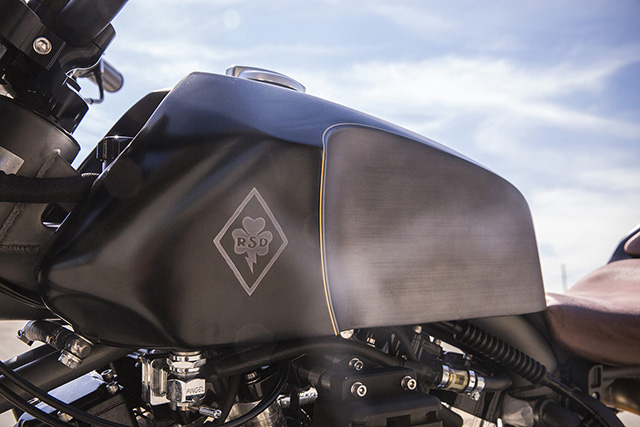 The team fashioned the new aluminum bodywork for the titanium-framed two-wheeler, tacked on a few additional bits from the RSD catalog, and then sent it home with its stock running gear. A year later, the Ecosse’s owner was itching for more, so he returned to SoCal outfit to have the special edition Heretic undergo what became stage two of the tracker treatment. 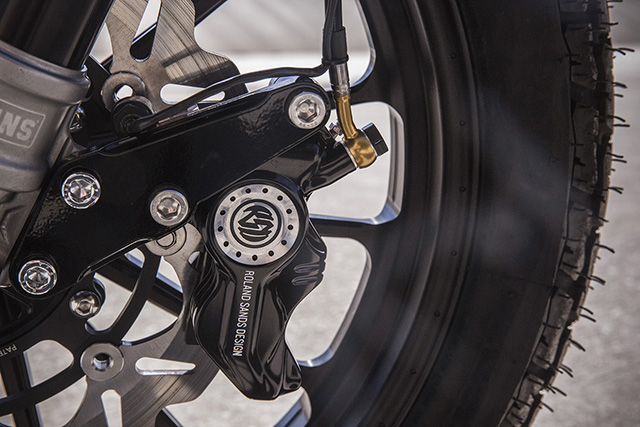 Roland and the gang began the latter half of the build by swapping out the Heretic’s stock front-end for a conventional set of Öhlins FG forks. Next, the bike’s original twin disc six-pot ISR brakes were replaced with a single RSD disc and RSD caliper, reportedly modelled after the setup on the Indian factory race program’s TT-spec FTR750. The Ecosse tracker also gets the factory race bike’s same 19-inch CNC’d aluminum RSD Traction rims, now shod in Dunlop DT rubber.

The massive mill was experiencing a few hiccups, so the Long Beach-based V-Twin gurus over at Bennett’s Performance tore down and fully rebuilt the Heretic’s powertrain. While the engine was pulled apart, the RSD squad took advantage of the opportunity and gave the motor a minor visual makeover. 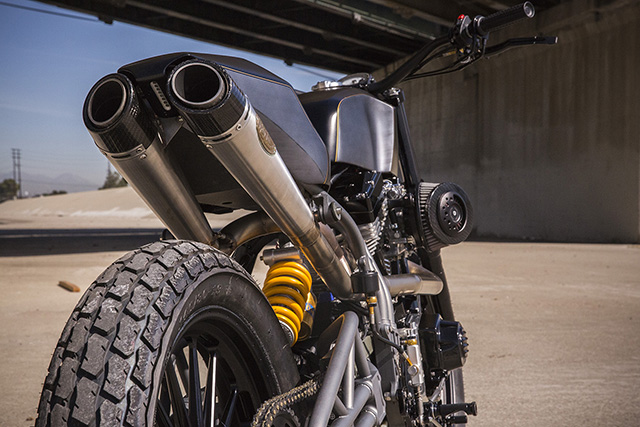 Originally polished in its entirety, the robust billet V-Twin now sports a more subdued appearance, with black powder-coated cylinder head valve, primary, and pushrod covers, as well as various other blacked-out cases and covers. The Heretic’s dual-throat intake was also switched out for a carbon fibre RSD Slant air cleaner.

This time around, the bare aluminum bodywork was hit with some color. Chris Wood of Santa Barbara-based paint specialist, Airtrix, laid down a tasty metallic black livery with exposed portions of brushed aluminum, gold pin-stripe outlining, and faded RSD clover-bolt logos stamped on either side of the tank. In place of the stock gel-padded seat is now a custom brown leather saddle complete with a bum-stop back-piece. 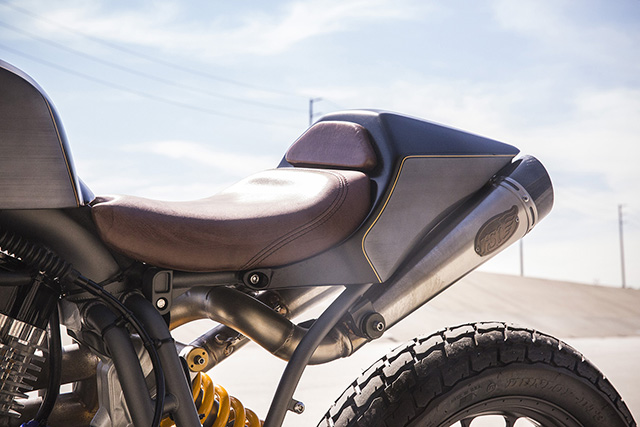 The original cockpit setup was binned and replaced with a set of Renthal bars decked out with a Motion Pro throttle kit, plus clutch and brake radial master cylinders, levers, and grips from the RSD catalog. The stock headlight was also exchanged for an RSD item, and the company’s instrumentation relocation kit was also used to mount new aftermarket gauges.

While still retaining much of the original donor’s muscular roadster flavor, the modified Heretic now bares RSD’s signature super hooligan vibe. Some of the flashier go-fast bits were jettisoned in the name of superior performance on the dirt oval, though the Ecosse is still a solid blend of form and function. 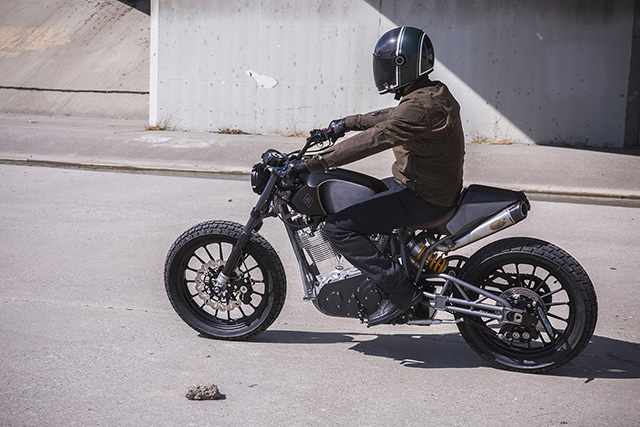 The final product is another outstanding addition to Roland’s immense portfolio of well-executed tracker builds. With the donor’s pedigree, steep MSRP, and top-of-the-line stock componentry, this project will likely spark some controversy, though it’s hard to make an argument for adulteration when the end results look this good. 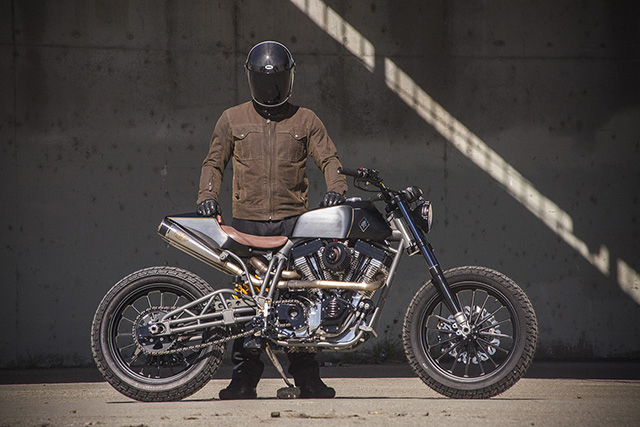