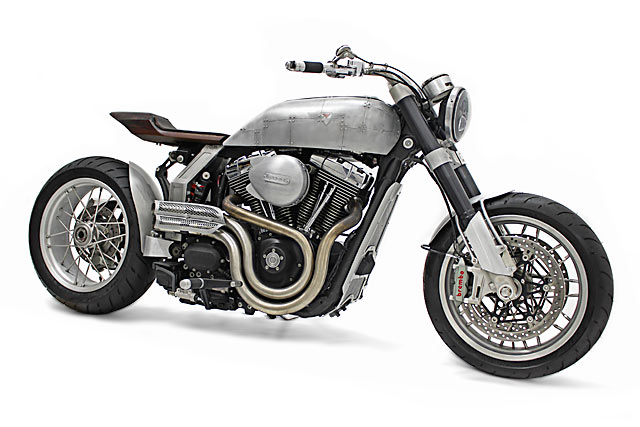 Ever wondered what makes a great artist great? Like it or not, we’re about to tell you. A great artist is able to see a masterpiece in just about any base material. Give them a dirty great rock, they see a statue. Give them a bunch of paint, and they’ll see a million dollar painting. And if your weird-ass taste happens to feel the need, give them a big ol’ Harley Dyna and they’ll see something that looks a lot like this. Here’s the latest build from White Collar Bikes, one of Indonesia’s premier bike builders. It’s a Wide Glide Hog that will have you rethinking Harley’s entire range. We spoke to White Collar’s Ram Ram Januar at his Bandung, Indonesia base. “This bike is called ‘Tomo’. It’s my friend’s daughter’s name. The base bike is a Harley ‘13 Dyna Wide Glide with EFI,  but this is my first time building a Harley. To be honest, I was never really fond of Harley’s before this, mainly because of their overall designs. I never really liked them. Although the one thing I can say is that I always loved the engine.” “As for the story behind the bike, I have a friend and he is a bit a bike collector. For whatever reason, he bought a new Dyna and had it delivered to me after it arrived. He never got a chance to ride it, he just said that he wanted me to ‘do something with it’. I said to him, ‘forget it!’ but how wouldn’t take ‘no’ for an answer. I suggested that he pretend that he didn’t own the bike, and then offered to fix it up for him while he waited. Amazingly, he said yes.” “I stared things off with a few sketches and 3D designs to get my head around it. Eventually, I decided to build a bobber with it, but when the final design was finished, I was committed to make it look as different as possible to the original bike. By the way, ‘Tomo’ is the nickname for the customer’s newborn baby girl, so I made up a logo based on the letter T.”

“I have it done a little CNCing on the seat and clutch cover, but everything else was handcrafted; from the riveted aluminum gastank to the wooden seat. Strangely enough, the main problem with building this bike was the electronics. What a pain!”

“I had to relocate all the wiring and electronics from under the seat to inside the gastank so I could build a really clean bike. And apart from the Harley thing, this was also my first time building wire wheels. I’m using aluminum for the front and the rear, but with 8mm solid stainless steel for the wires. I don’t think I want to do it again, because it gave me so many headaches. But it was seriously worth all the effort. The bike runs as smooth as a marble.” “I’m using Brembo’s monobloc brakes for the front and rear. The front forks came from a KTM Super Duke and I custom-made triple trees using T6 billet aluminum. The swingarm is made from steel tube and the eccentric hub came from a Ducati.”

“It was a total pain in the arse making the exhausts; it’s all hand bent from stainless tube. But in order to have the curves that I wanted, we spent almost the entire week making it. But again, it’s worth every drop of sweat making it.” The wood is hand carved from a solid piece, and it took almost 13 days to make it. The wood is very hard, Indonesians call it ‘Sonokeling’ (or Rosewood in English). It’s a local tree there, but it’s still quite rare and expensive. The main theme for the Dyna Project was the use of raw materials. The bike features no paint other than the frame and swingarm. Everything else is raw – what you see is really what you get.

“As mentioned, there’s a little CNC work in there, but overall I used very little machining to build this bike. Everything else is handformed. I’m a firm believer that the more automatic machines you used to build a bike, the less soul the end product will have.”