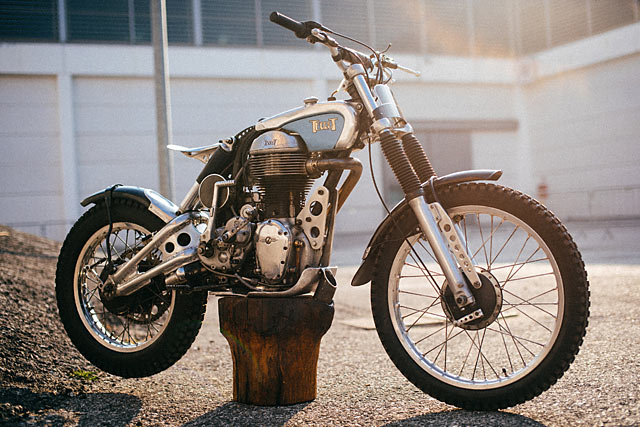 Rémy Vivien builds motorcycles in his spare time out of his workshop in Alsace, France. In recent years he’s caught the trials bug and as a devotee of old machines, he squared up the pre-1965 class. ‘But I didn’t want to buy an existing motorcycle that I had to modify, or assemble any parts from the internet. I wanted to create it from scratch,’ he says. ‘I wanted to make something for me by me. Something different.’ And he certainly has, with this incredible custom trials moto, powered by a 1946 500cc RGAS Terrot engine. You can’t be blamed for not hearing of Terrot, but decades ago they were huge. They produced all manner of mopeds, two-stroke motorcycles and in a booming period, larger four-stroke motorcycles for the French army. Production was cut short by another period featuring more literal booms – the invasion of France. They were built again for a short period after the war, but Terrot never really continued the trajectory it had set in the 1930’s.

While people outside of the continent might not be familiar with the marque, in France Terrot motorcycles are still quite common, so much so that this engine was gifted to Rémy by his brother, a long time co-conspirator in motorcycling. And the donation was the engine only, because if you look at what the powerplant was designed to sit in, it was a big, heavy-ass road bike designed to haul an outfit – nowhere near ready for trials competitions. So the first thing Rémy had to wrap his head around was the frame construction. All that rock-hopping and log-jumping requires a light, lithe chassis. So to get that right Rémy copied modern frame geometry as closely as possible, with the rake, trail, ground clearance and dimensions eerily similar to a modern bike. But there was a problem. ‘It would have been perfect except for one thing – the engine was too large!’ So the big single went onto the workbench for some head scratching. ‘It’s a pre-unit engine which meant I could mount a Terrot 1937 4 speed gearbox. It’s smaller, and that reduced the overall length by ten centimeters,’ he says. ‘I also made some new crankcase covers, which allowed me to mount the footpegs in the correct position.’ Around that the frame was crafted, which also acts as the oil reservoir and sits over the hand-beaten 3.5 alloy litre twin fuel tank. Between the two halves of the tank sits the magneto, cables and wiring, while on top is a hinged fold away seat, an unusual addition for a trials bike. But the real star is the suspension. ‘All the components are a huge puzzle, but it works perfectly!’ Rémy declares. The rear XT wheel is mounted to a scratch-built swingarm and controlled by twin Fournales shock absorbers, while upfront the forks, shocks and rims are a mixture of Honda, Fantic, Norton and Ossa parts. With a lick of blue paint, a hand-drawn logo, and a few dozen trials rides under its belt the Terrot was wheeled out to an astonished crowd at the Verona Motor Bike show – four years after he began the project and two years longer than he had planned. But it was worth it. ‘I had no idea what an impact it would have on everyone,’ he said. ‘I took a lot of questions from the crowd, if it was a factory motorcycle, where it came from and what a Terrot was.’ But the best thing was people’s realisation this was no pure show bike. ‘People asked if it was running,’ he laughs, ‘And when we told them it was running in trials competitions they were shocked!’ And it runs well too, with Rémy’s son, Maxime, doing much of the log-hopping around the French countryside on this gorgeous old bike. ‘It works really well,’ Rémy declares, ‘It really exceeded my expectations. The suspension is works perfectly and the bike is always very stable.’ So, all these years on, he really does have something different, something handcrafted and ultimately, functional. The perfect holy trinity of custom motorcycles.