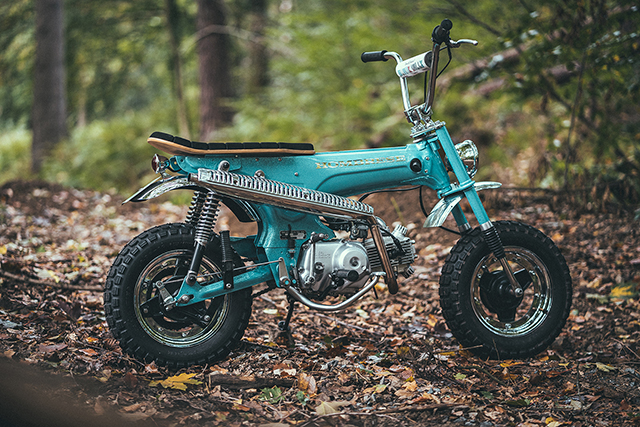 There’s something about mini bike models that’s hard not to love. The small-wheeled steeds are motorcycling in its simplest and most pure form with components that just meet the bare minimum requirements to get the job done and engines boasting power to match. And despite their performance (and size/comfort) limitations, for many riders, mini bikes were their first introduction to the wonderful world of motorized two-wheelers. 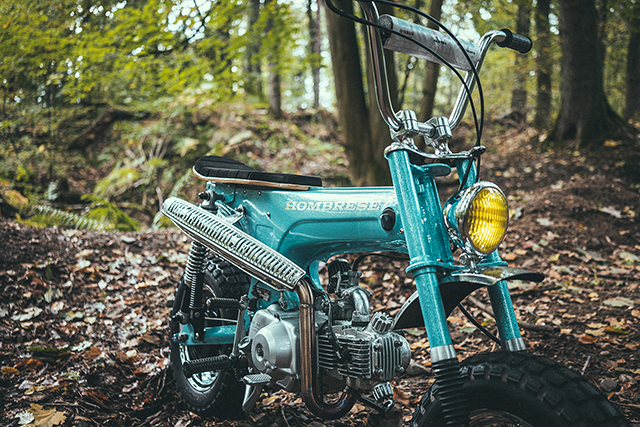 Included among those riders is Uwe Kostrewa of Cologne’s Hombrese Bikes, who, after completing a number of full-size builds, wanted to scratch that good ‘ol nostalgia itch and revisit his childhood in the form of a one-off Honda Dax that would celebrate his passions from his formative years. 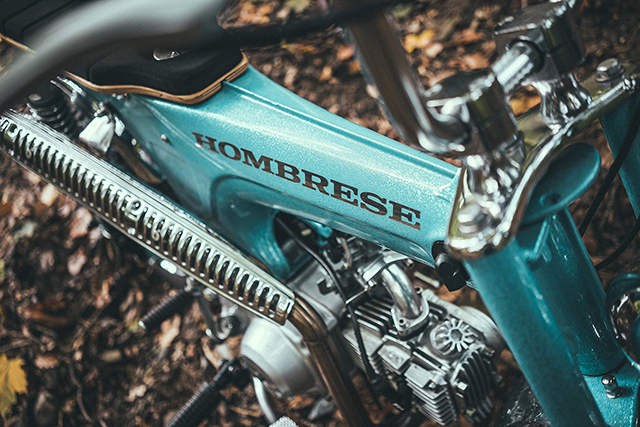 “My first motorcycle was a (Honda) Monkey and I rode BMX as a kid a lot, spending the majority of my time in the forest riding. There was also skateboarding and a few other hobbies I wanted represented in one way or another on the mini,” Uwe tells us. 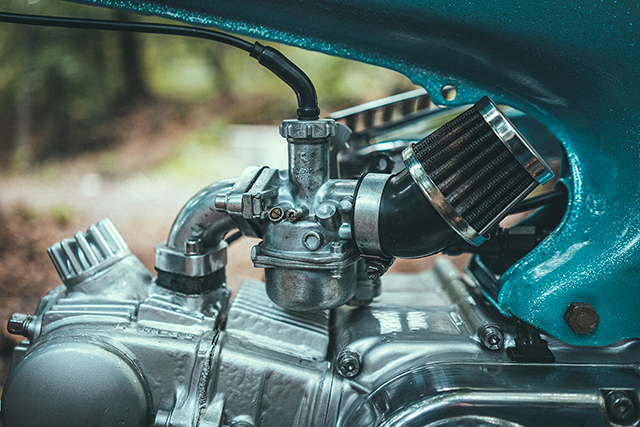 The two-wheeled trip down memory lane started out with a 1973 Honda Dax (ST 50) that Uwe had originally purchased to romp around on in its stock form, though once a few seasons had passed he decided it was time for the little Dax to get a new coat of paint. “After disassembling everything I quickly realized that I wanted more than just a new color, and a pretty soon an entire one-off project was taking shape,” reveals Uwe. 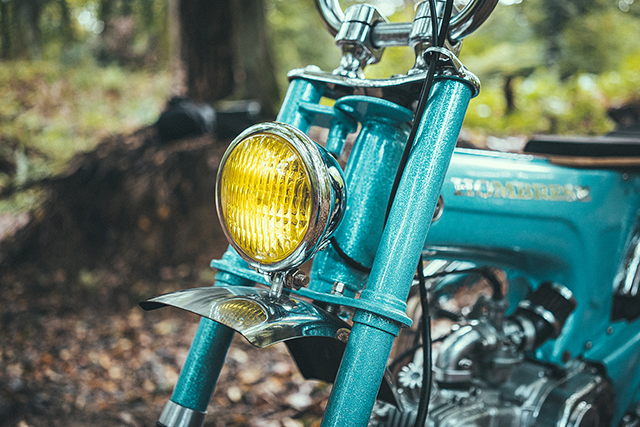 In order to give the pint-sized runner a little more get-up-and-go, Uwe installed a 90cc cylinder kit, an electronic ignition, and a new gearbox with four speeds – one more than the stock setup. The ’73 mini was also gifted a 24mm Keihin carburetor and mini pod filter, along with a new exhaust system that Uwe welded and polished in-house before reattaching to the Dax. 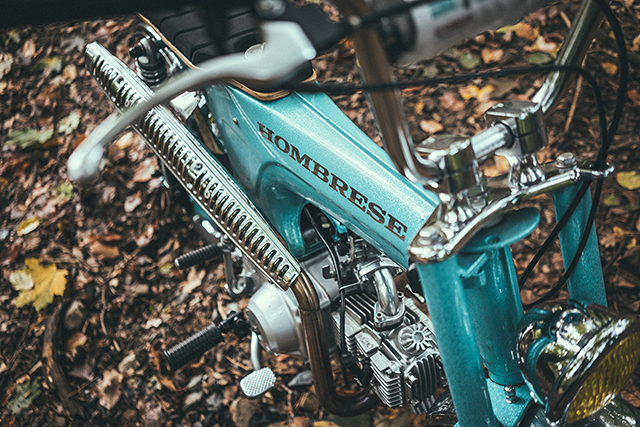 The stocker’s iconic pressed steel frame was left as is, though the beefy factory bench-seat was pulled, and in its place Uwe crafted a new seat-pan made from a skate deck. A thin black foam pad was shaped to fit the cut-down board, and then sliced into eight strips before slapping it onto the deck. Toward the front of the impromptu seat, a circular portion was cut out of the foam and board in order to accommodate a one-off fuel-cap that sits neatly in the new seat. The original fenders were removed, shortened, polished, and then re-mounted with the forward item now positioned just beneath the headlight, which now consists of a Bates unit with a vintage-style yellow lens. Out in back, there’s a small circular taillight, nestled between chopped fender and the upswept tail of the board. A custom chrome top triple was also added to the mix, and then fitted with risers to accept a classic two-piece BMX-style handlebar, made specially for this build. There’s also new grips, pegs, and a single BMX-style lever. 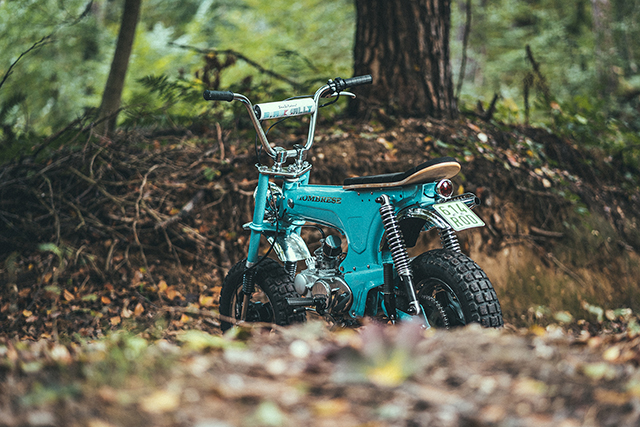 Next came the paint, which was what spawned this whole project in the first place. Uwe opted for a metal-flake sky blue powder-coat for the chassis, fork, and swing-arm, with “HOMBRESE” lettering across the main section of the frame. The majority of the exposed metal —including the chrome top triple, risers, fenders, headlight shell, exhaust heat-shield, etc — were thoroughly polished, and just for good measure he wrapped a matching light blue Deus Swank Rally crossbar pad to the new handlebars. 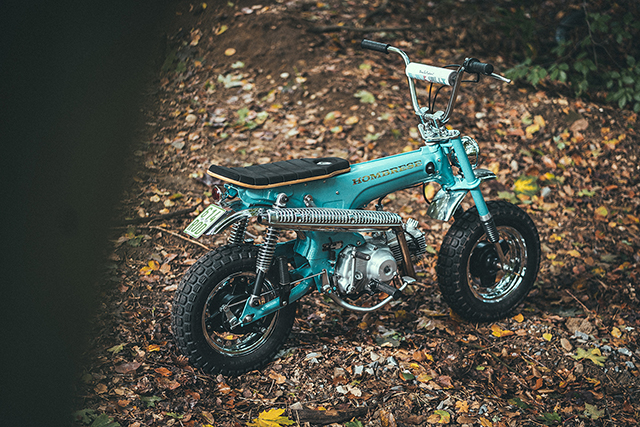 Even with the paint sorted, it felt like something was still missing, so Uwe tracked down a super nifty set of three-star chrome rims – stock pieces off of a Japanese market model — and proceeded to shod them in mini dual-sport rubber, before tacking them back onto the Honda. 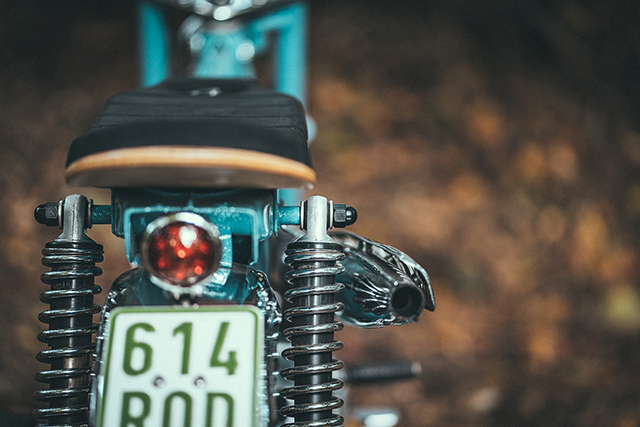 “I really like the metal-flake powder-coat and the skateboard seat, but more than anything I love how it comes together as a whole, it’s like a mix of a BMX and mini-chopper” says a proud Uwe. 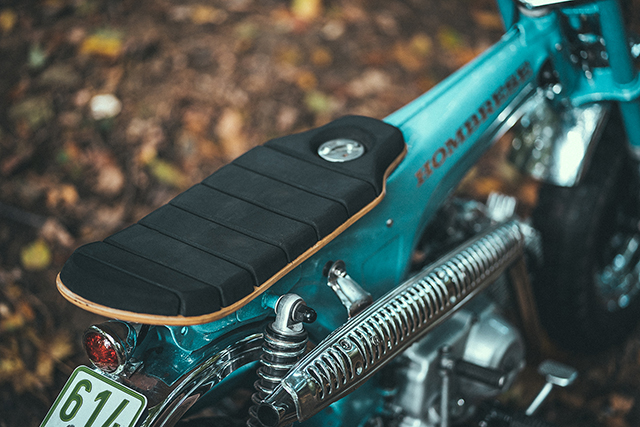 While markedly less involved than the previous builds to roll out of Hombrese HQ, Uwe has without a doubt successfully completed what he set out to do, going back to the basics, rewinding the clock a few decades, and delivering a tangible reminder of what lead him down this path and why he got into this whole building thing in the first place. We imagine a 13-year-old Uwe would be pretty stoked to take this turquoise two-wheeler out for a spin, though in all fairness, so would we. 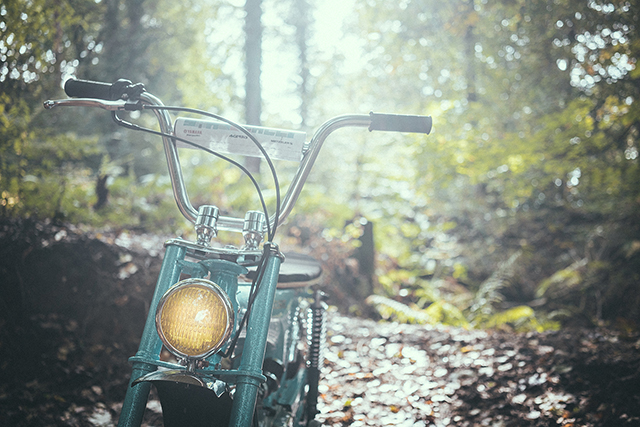 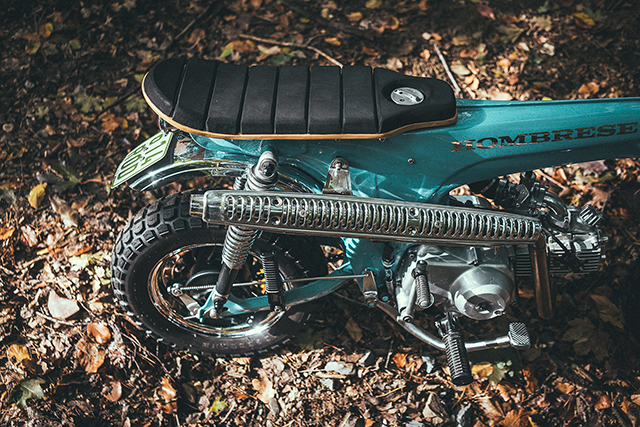