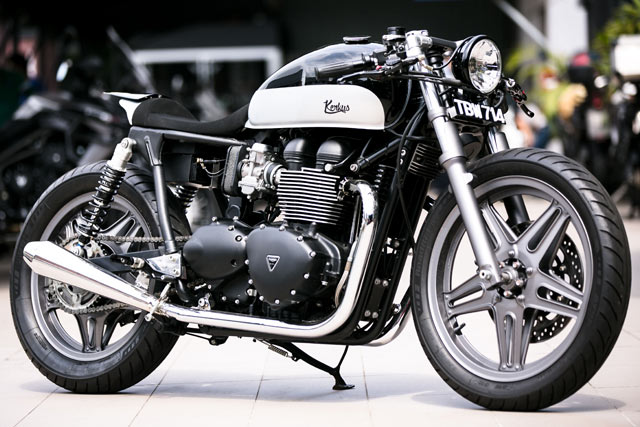 There are plenty of interesting brand combinations in the world of motorcycles. You’ve got the classic Tritons, Tribsas and Norvins. Then there’s JAPS and Broughs. Hell, BMW and Peugeot even teamed up at one point. But I’m pretty confident when I say that we’ve never, ever featured a bike that’s seen a Honda and a Triumph Bonneville come together like this. Is it a Tronda? Or maybe a Hiumph? All we know is that this, the latest bike from Malaysia’s Kerkus Motorworks, is set to be a real star. After eyeing the bike a few month’s ago at Malaysia’s Art of Speed show, we were happy to see that the bike had finally been shot. But first, the boys wanted to talk shop. “2018 will be a big year for us,” says Kerkus half owner, Azaha. “We’re planning a cafe racer conversion kit, focusing on the Triumph Bonneville. We will also launch our official website, where people can buy new Kerkus parts and apparel directly from us”. The donor was one of the last of a breed – an air-cool 2015 Triumph Bonneville EFI breed to be specific. “It was actually a build commissioned by Triumph Malaysia that was to promote the brand at this year’s Art of Speed show,” says Aza. And just how the company felt about the Honda Comstars is anyone’s guess – but by the smiles on their faces when we met them, we don’t think they minded too much. “The inspiration comes from the same place for all our bikes; we’ve always loved minimalism and industrial design… especially when the two are combined”. With the bike’s blatant ‘use it or lose it’ design ethos and stark black and white tank decoration, it’s not hard to see how they’ve put their spanners where their mouths are. “Actually, we only had around 1 month to finish the bike,” continues Aza. “Right after we got the bike, we immediately started doing many sketches on what the finished product could look like. But we had to remember not to overdo it, as part of the deal with Triumph Malaysia was to make the completed bike sellable. In fact, we managed to sell it right after the show”. As for the modifications, the build’s definitely more complex than its clean, simple lines may suggest. “The three big mods were the lowered forks, the trimmed and cleaned rear frame and the suspensions upgrades. Oh, and the Comstars, of course.”

With the rears springers upgraded to Ohlins, the fronts were gifted a set of progressive springs and thoroughly reworked to make sure they didn’t let the side down, figuratively or literally. Other ‘I didn’t notice that until now’ goodies include a side-mounted speedo, Rizoma racing foot pegs and reservoirs, Tommaselli clip-ons, a Drag Specialties front headlight, a British Customs muffler, Triumph racing levers and a pair of Avon Roadrider hoops. “Choosing the right colour was very hard,” says Aza in closing. “Me and my partner Raveen had many rounds of discussions on exactly what the tank would look like. In the end, we agreed with what you see here. We both think that the monochrome scheme is the right way to go, as it’s clean, minimal and it can blend in perfectly to almost any situation”.