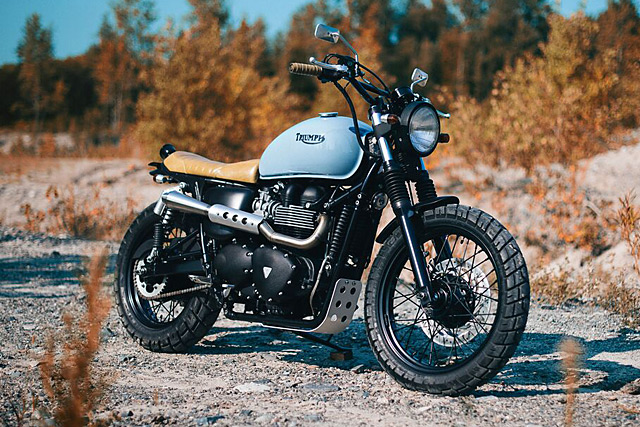 Unless you’re a recovering hibernation addict, it will not surprise you to hear that the bike style de jour is the oh-so-hot scrambler. With Ducati having thrown their hat into the (dirt) ring with a new model late last year and BMW looking to follow suit soon, it seems the world’s bike buying population has developed a real taste for dust. But what if you wanted something a little more trick? Something that said more ‘you’ than ‘me too’? Well then, you’d probably be in the market for something like this… Clockwork Motorcycles is a shop in the Canadian countryside, about 30 minutes south of Montreal. The owner’s name is Samuel Guertin, who also happens to be the builder behind all their bikes. “After working as a helicopter mechanic for almost 10 years while wrenching bikes and cars on the side,” says Sam, “I needed to fulfill my dream of pushing my art to another level. So I started Clockwork about 3 years ago.” The shop will celebrate its first year of running full-time in a couple of weeks, and ‘Elizabeth’ is their 6th official build. “When I first met Anicée , the owner of a stock beige ‘14 Triumph Bonneville, I knew she wouldn’t be riding a stock bike for too much longer.” The purple haired, tattoo-covered woman is a famous Canadian TV director with a big personality and a real love of tattoos. Naturally, OEM just wasn’t going to cut it. “As I suspected, I received an email a couple of weeks later telling me that she wanted to do something more unique with the bike. We exchanged some ideas, then the project started in earnest. What I liked most was that she didn’t care about me using the grinder on the brand new frame. I shortened it a couple of inches and bent a nice hoop with a subtle kick up.” Sam took all the modern electronic do-dahs hidden back there and carefully relocated them so he had a flat, horizontal surface to place a sweet seat on. The stock battery was also tossed for a smaller lithium-ion unit. He then shaped the seat pan to fit the new frame and asked Ginger at New Church Moto to finish it off with a beautiful tan leather cover. A custom rear fender was then made and fitted. “We were after a city scrambler look and stance so she could bomb around on the streets of Montreal’s downtown. To achieve that, I replaced the stock bars with a Biltwell dirt bike handlebar. The grip was wrapped with the same leather as the seat. And yes, those handlebar end cap are Canadian dollar coins with the Queen side out. British bike. Canadian builder. ‘Elizabeth’ was born.” “To complete the cockpit, I needed to get rid of the enormous gauges. Enter the Motogadget Chronoclassic. Perfect. For the headlights, I wanted something with a little cachet–something with more history than aftermarket ones. So I used a vintage Kawasaki headlight. Its flat look and matt glass fit the style perfectly.” Sam continued with the British/Japanese mix by adding some Posh turn signals, tail lights and mirrors. And what’s a scrambler without the high pipes? A set of custom-made stainless exhausts were fabricated, along with some hand-shaped aluminum heat shields to make sure Anicée didn’t go up in flames. He kept the stock wheels, but had them powdercoated satin black and wrapped with some Shinko dual sport rubber.

“The final touches were a nice, thick skid plate and the solid Biltwell mushroom pegs. The stock tank was retained, but I needed to get rid of the plastic badges and the rubber knee pads to clean up the look. A nice steel blue paint was then sprayed on top.”

“It didn’t take much for this bike to become a really fun ride that sounds more than a little awesome. It’s a big step up from the stock bike. Anicée now has something really different from the hundreds of stock Bonnies running around on Montreal’s streets, and as she told me many times, she likes it very much.”