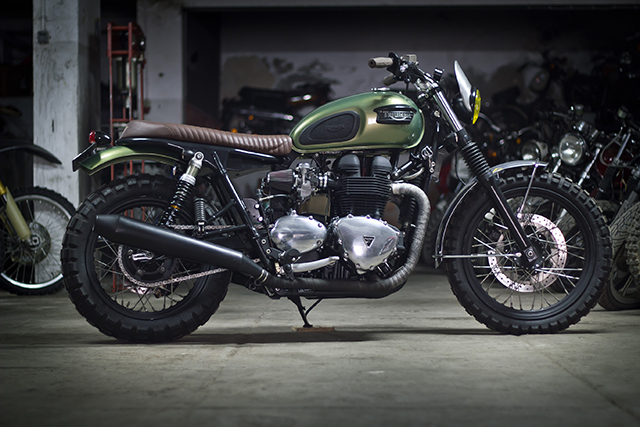 Isn’t new love grand? You just want to spend time together, walking on the beach, holding hands, riding your bitchin Triumph down country lanes two up …This is the thought behind today’s feature bike, a labour of love from the Ton-up Garage in Portugal. Built for a couple looking to spend as much time as possible together, this Triumph Bonneville has been customised while still allowing for two up action. Dubbed ‘Hellzapoppin’ after the dance style that brought them together, this bike is tearing up the streets of Lisbon and backroads of Portugal, showing that Ton-up motorcycles aren’t necessarily about one up motorcycling. Taking the Bonnie back to bare bones, Ton-up looked at ways of giving the bike a more sporting aesthetic, while still retaining the ability to take a pillion passenger. A new seat was fashioned up, manufactured in leather. The rear subframe has had an angle grinder taken to it, and a new rear loop mounted to accommodate the new seat assembly. A new rear mudguard was also produced to suit the lines of the seat, and to ensure the pillion passenger’s back stays mudfree. Whilst the rear subframe was being improved, the electrical harness was tidied up, and the factory airbox ditched to give that minimalistic look. The front end has been given the works as well, with a new handlebar fitted that sports custom grips and levers. With minimalism being a major aspect of the build, both the headlight and turn signals have been swapped out for smaller units, and an MX shield fitted to the headlight. The bulky factory meter cluster is gone, and a smaller speedo sits in it’s place. To give the front guard an ‘older style look’, it has been chromed. With riding ability required beyond the city streets of Lisbon, the Trumpy rolls on dirt tires, while still keeping the factory spoked rims. Ton-up built up the exhaust system in house, pipe wrapping the header pipes and angling the Dunstall style silencers ever so slightly upwards to add to the off road styling of the customised machine. With room for two, and ability to take this lucky couple where ever their heart desires, Ton-up Garage’s latest build incorporates sporting as well as off-roading aspects. Built by one of Europe’s leading customisers, this Triumph is the bike that love built.