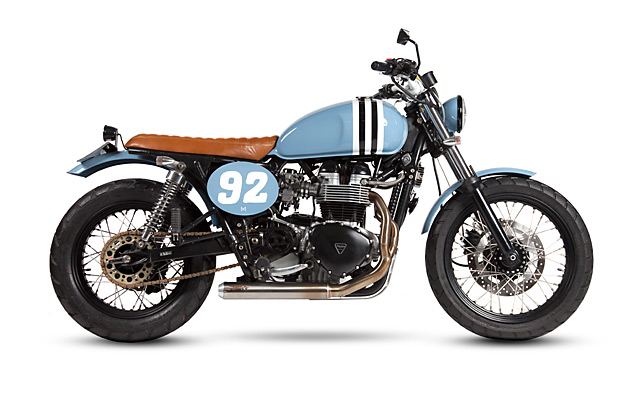 Lordy! What are they putting in the water over there in Lisbon town? One would have to assume it’s a mixture of amphetamines, high-octane racing fuel and a big gob-full of ecstasy. Why? Because it seems that for a country of only 10 million people, they are certainly pumping out some very quick and very beautiful builds. And clearly no-one’s been keeping better hydrated than Luis and the boys at Maria. Here’s their next build – hot on the heels of August’s muito popular Spitfire bike – it’s a 2001 Bonnie they’ve entitled ‘Lieutenant’. Luis, Maria’s ‘Mechanics Headmaster’, let us in on the whole operation. “Our client wanted the works – a Triumph Bonneville with all the customisation boxes ticked. So our approach was business a usual; a bike up to our usual standards, but still very different from everything else we’ve ever attempted. We had no special briefing. Our client just told us to “make it simple, easy to ride and no big tech parts. Just a beautiful, original machine that will turn heads.” I think we made him happy.’ “Once again we were inspired by WWII, but as always we wanted a modern look as well. We decided to do a color scheme based on German tanks. The stripes, however, came from the wings of American D-Day planes. The overall look has no special meaning, it’s just a combo of colors and references based on the military. In the end we thought the name ‘Lieutenant’ was perfect, since it matched the grade stripes and tipped it’s hat to the military references we love so much.” And if you thought that WWII involved a lot of cool hardware, just wait until you get a load of this specification sheet. The boys started by whipping up a brand new, custom-made leather seat in what has to be one of the nicest shades of tan we’ve seen all year. Next up was a little grind and weld action on the rear frame to shorten things. Then they added a new set of Metzeler Tourance hoops, a new set of LSL ‘bars and a new, decidedly more understated headlight. Then came the fenders. Luis made the call, and new aluminium guards were added front and back, along with a new brake light from Posh, a new sprocket cover, a Renthal sprocket and chain, and a new set of fume tubes by Zard. The Ignition barrel was relocated by an LSL bracket kit, and the new indicators were set in place by Maria’s own handmade supports. The finishing touches came in the form of a new speedo and aluminum support plate, a skid plate, side number plates, some new grips from (you guessed it) Posh and some not-too-elephant-ish mirrors. The final step was the paint job, which was liberally applied to the bike’s original tank, rims, hubs, valve cover, carb cover, fender and engine covers. And then the boys had a beer. “The first test ride revealed that the bike had become very light and agile. Of course it would, as we had removed many of the original parts so it felt like we had released the ‘inner bike’. To help this even more, we gave it a carb retune to add a little aggression and speed to the mix.” “Looking at it now, the result was a clearly a very vintage look. As you can probably see, it’s mainly because of the painted mudguards and the military blue colour of the bike. We were pretty happy with the overall look, and so was the owner.” No kidding. If ever there was a case for spending more time thinking through the colour scheme of you bike, this is it. If you ever find yourself thinking ‘all matt black’ or ‘metallic silver’ again, just pop back here and wonder to yourself, ‘if this is what a few hours solid thought on the paint job can do for a bike, why not give it a go?” Why not indeed.