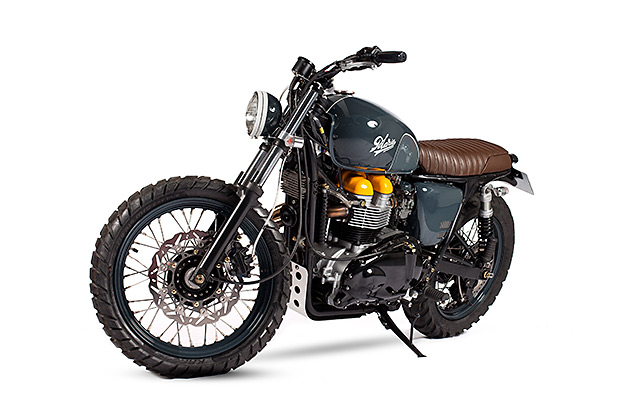 Portugal’s Maria Motorcycles has a glowing reputation for building quality custom motorcycles that leave no stone unturned in their pursuit of perfection. So it was no surprise when they got a call from a Triumph Bonneville aficionado who had a 2001 model he wanted built to scrambler spec. So confident was the owner, he gave Maria no design brief but having previously built a Spitfire-themed Bonnie the boys had the bright idea to again follow the World War II angle. Only this time with something from the other side of the Channel, a German-themed military spec vehicle that goes by the name of Luther. The Triumph Bonneville is just a good-looking bike, very few enthusiasts would ever complain about its look and as history has shown its classic style lends itself perfectly to further aesthetic enhancement. Straight from the factory Triumph give you a beautiful tank and Maria saw no reason for a change, what they have done is laid down a two-tone utilitarian green paint job that instantly gives a war machine feel. The colour is perfectly broken up by white striping and Maria Motorcycles logos, while the green with white theme is carried over to the Harley Vintage headlight and cleverly adapted to the green side covers with white mesh vents. If military green has a perfect bedfellow it’s the rich dark leather that covers the custom seat with heavy white stitching that is now the perch for the lucky Bonnie pilot. To tidy up the rear the frame has been shortened and the exposed pipe ends plugged with a bobbed aluminium rear fender keeping the whole show mud free. There is no front fender but an aluminium skid plate protects the engine from front end contact, although I’m not sure I could bring myself to take this beauty off-road. To finish the look the carb tops are painted in the darker shade of green that adorns much of the bike but the valve covers have been coated with an in your face yellow just to break it all up. I could never get bored of the Triumph Twin, I’m sure by now you’ve heard me bang on about it but as Maria have proven time and again it really is the perfect Scrambler engine. You barely have to get it revving before 90% of the engine’s torque is available until it’s time to shift, it might be old school tech, but a torque curve that flat is engineering brilliance.

To increase the aural joys of the thumping twin Maria fitted up a beautifully crafted 2-into-1 Zard stainless system that restores much of the music of the older triumph motors. For a few extra ponies the carburettors were rebuilt and retuned and throttle response is now instantaneous at any rpm. One of the things that makes Maria Motorcycles such standout builders is their attention to detail, close enough is not good enough for them and so the engine was completely cleaned, fitted with all new bolts and clamps before being repainted above and beyond factory specs. Tyre choice can be the make or break on a custom bike and even more so on a scrambler, sure you can throw some big tread on for aesthetic purposes but if the tyres are useless on anything but mud the bike becomes a bit of a statue. The Maria crew made no such mistake, the Metzeler Karoo 3’s give the look as well as brilliant off and on road performance. They’re fitted to relaced wheels with the rims coated in green and Luther comes to a screaming halt thanks to the addition of a wave style front rotor. If you are going to be playing off-road then the fitment of new aluminium Renthal sprockets and chain makes perfect sense least you be re-oiling daily and the front item is treated to a custom cover. Wrestling the beast is left to a set of handlebars by LSL topped with grips from the ever popular Posh. To keep Luther road legal and free to roam Portugal’s back roads or motorways indicators have been fitted front and rear with clear lenses to minimise their visual impact. Tidying things up even further is the custom aluminium speedo bracket that holds just a single speedo and the ignition has been relocated with thanks to a kit–also from LSL. The finishing touch was a final nod to the World War II era with the chrome removed from the gas cap to reveal copper like raw metal tones as if it was an oversized button from an officer’s uniform. With the customer being a true Bonnie man, the inclusion of USD forks would never have suited his taste but adjustable progressive shocks help that meaty rear rubber grab whatever surface they’re asked to take on. With a Triumph collection parked up at home you could forgive the owner for letting Luther sit in the corner gaining all the attention thanks to his German precision looks. But Maria Motorcycles aren’t putting Lisbon’s custom bike scene on the map by building static displays so you better believe this Brit in a German uniform gets just the sort of flogging he deserves.