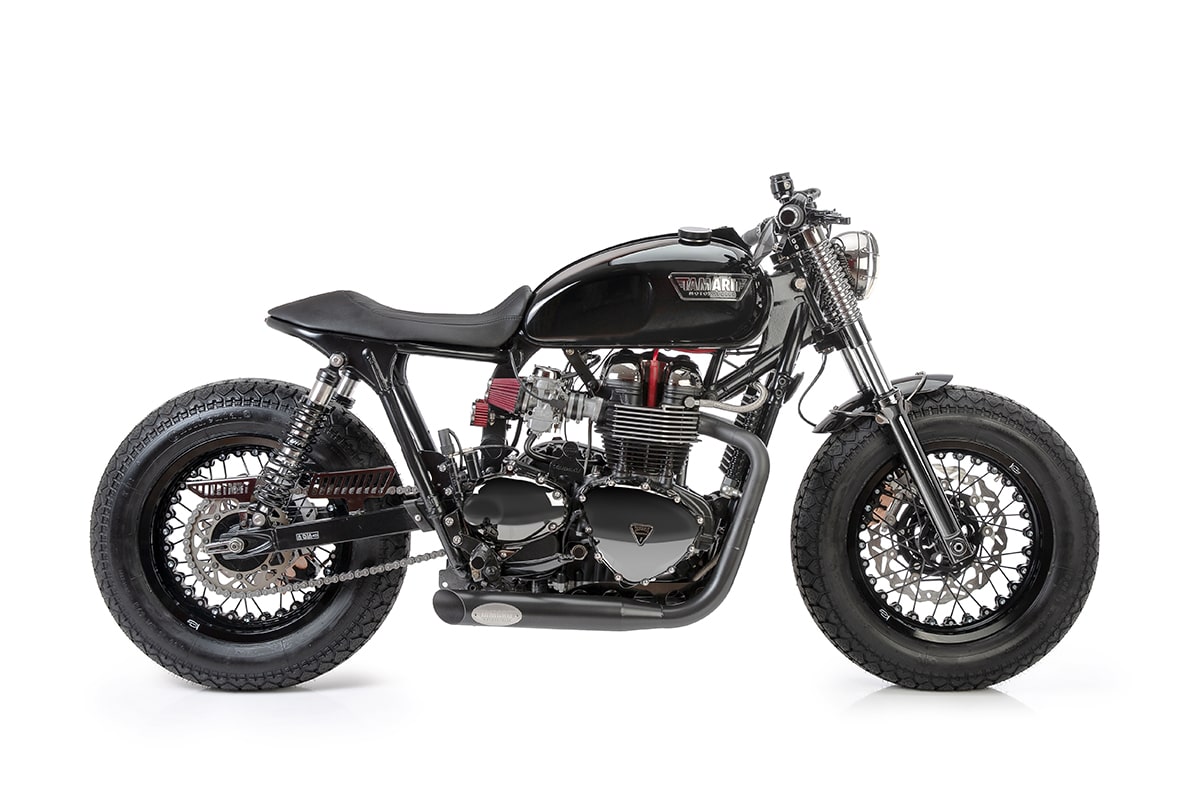 You have to hand it to Triumph, as many other manufacturers entered the millennium looking to reinvent the wheel to get sales back on track, the Hinckley factory opened their back catalogue and gave the Bonneville a modern make-over. Twenty years later and now with water-cooled engines and fancy electronics, the classic lines and simple motorcycling charm sees them continue to be a sales success. But what if you want something with a little more meat on the bone, a bike that has a tougher persona than a stock classic? You turn to the Spanish kings of custom at Tamarit Motorcycles who had quite the surprise for one very lucky father.

The team of Matias and Andrea told us how the final reveal went down, “the delivery of Othar was special, this time part of the Tamarit team went to Marbella to make a little surprise to the owner of the bike #73, Pablo. Taking advantage of the fact that the client did not know us in person, we met him at a dealership and after a little joke, we gave him his bike, Othar. His wife was part of this little surprise to celebrate Father’s Day, undoubtedly a day he will not forget.”

Talk about wife of the year! But long before that final delivery could be made, the boys had to build the bike up to their usual exacting standards and it all started with a stock as a rock Bonnie. As they always do, even with a very good condition donor, the motorcycle is first stripped down so the frame can be prepared and a new wiring loom built. This is an important part of their philosophy, allowing them to build a minimalist loom that is hidden in the frame as much as possible and the other components hidden in a custom box under the seat for an ultra-clean appearance.

Onto the frame and a host of tabs and brackets were cut off and some unneeded holes filled before it was all smoothed down and given a new coat of chassis black. The subframe too has been given the full treatment, drastically shortened, the new hoop at the back hosts a recessed tail light unit and the passenger pegs are gone too. Over the top, a neat seat base was laid down that operates as the lid to the electronics box. Before it was generously covered in foam, shaped to give it a subtle rear hump, and then upholstered to perfection in black leather.

The metalwork is where the bike really shines and by now most will have picked up that something is a little different. To match the tough look of the design, the boys chose to put the chrome aside and opted for a black nickel finish on many of the parts. Still, with a deep luster, it has less of a ‘plastic’ feel than the usual finish and works beautifully with the overall colour scheme. One place it really stands out is on the company badge work on the freshly painted tank, which also features a Motogadget mini speedo and idiot lights mounted into the tin.

That black nickel also provides a tough as hell finish to the beefy front end suspension that has been given an upgrade with a huge three-bolt lower triple clamp keeping everything well held together. The perimeter springs add a unique touch and the top yoke hosts a new pair of risers that clamp a set of drag bars for a comfortable and yet far more aggressive appearance. The rear suspension is a too often overlooked part of any build, but the boys made sure the owner is well cared for with a set of fully adjustable rear shocks.

They become even more important with a dynamic change that comes courtesy of the big dollar wire-spoked Kieno wheels and even fatter rubber. Bolted to the new rims is a pair of wave-style brake rotors front and rear with rebuilt calipers providing the stopping power. Above the new front tyre the boys have fitted one of their blade like fenders on custom mounts, while the rear isn’t forgotten with a hugger and trim piece that bolt to the swingarm. Everywhere you look are nickel-plated custom touches, from the chain guard to the centre punched engine protector.

The legendary parallel twin doesn’t miss out either and after a refresh is treated to some black nickel parts of its own, with the rocker covers, side covers and a host of other components dipped in the finish. The intakes and breather all get their own pod-style filters so that the ugly airbox can be tossed aside. Before the big change comes in the way of gorgeous ceramic coated headers that each flow into their own slash cut rear muffler. New adjustable levers and a pair of custom rearsets to suit the new owner were fitted and then it was time to head to Spain’s Costa del Sol. Where one very lucky Pablo can now cruise the beach on his badass Bonnie, as his wife and Tamarit come through on a father’s day we can all dream of experiencing.