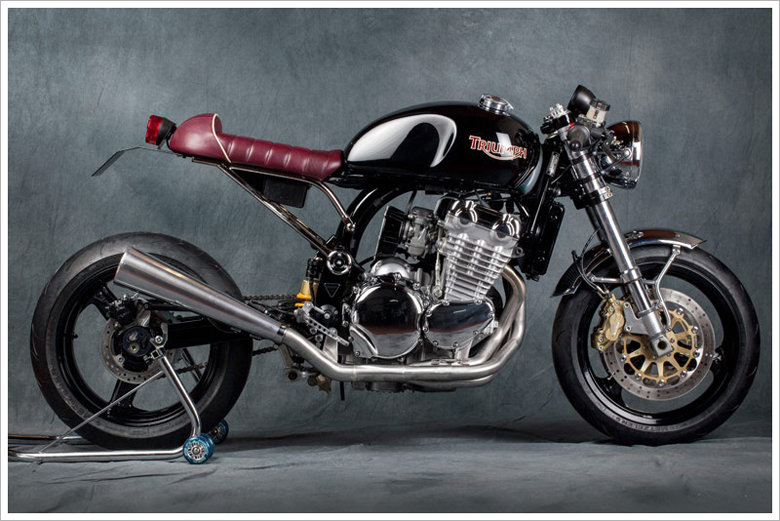 Some people tend to believe art and utility cannot mix. This is not more evident anywhere than in the commenters’ section on custom motorcycle blogs. Commenters argue that although the feature bike looks amazing, it would never survive on the open road. To these types, once a bike becomes an art piece it’s function goes out the window. Damn those commenters though, for they have not seen this feature bike. I present to you exhibit A in my argument that form and function can live happily side by side, Jerolamo, a Triumph TT café racer built by Mr Martini of Verona. Taking a 2000 model Triumph TT, Nicola ran his artist’s eyes over it, and built up an idea of what he wanted the finished bike to look like. Then during the course of the build he changed his mind. And changed it again. And again. This bike is an evolution of that original design concept, Mr Martini building on his ideas as he progressed with the build. The Triumph front end has been ditched altogether, being replaced by Showa upside down forks, Brembo front disc and Ducati hub. Half handlebars have been fitted to suit the bikes sporting credentials, and the rims swapped out for custom alloy ones. Italian flair has been built into this bike, the handmade Bordeaux seat cushion with cream piping sitting high above the the rear tyre. A redesign in the seating position meant a move of electrical components from under the seat to under the tank, leaving the space between the seat and the tyre clear of clutter. The simple seat mounting frame adds to the sporting aesthetic of the bike, and gives somewhere to mount the license plate. Exhaust duties are taken care of by a Zard custom 3 into 1 system, inspired by the Norton Manx. During the build process the bike gained a endurance fairing, then lost a endurance fairing. This rethinking of the design as he went along has allowed Mr Martini to produce the proof that something beautiful can be of use on the open road, that art doesn’t have to be static. The simple, lightweight styling of the bike shows the true spirit of the café racer genre, something that goes and stops and you can ride home afterwards. Art and utility can mix, you just have to make sure the bike design process is in good hands.

I rest my case.