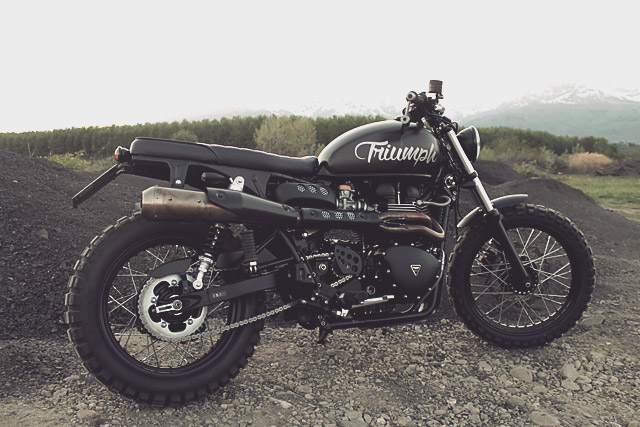 I’ve always liked the idea of custom bikes having a soundtrack. So much so, we used to always ask the builders who were featured on the site the same question – ‘if your bike was a song, which one would it be?’ Naturally, most of the answers were somehow related to Rock ‘n’ Roll. And as if by a beautiful stroke of serendipity, today’s feature bike is not only a baby of rock, she’s the spawn of the rockiest rock there is – punk rock. Being big fans of the bloody sprawling mess that is punk, we were naturally all ears… and eyes, too. And what a sight to behold; here’s Dagger Cycles latest and greatest hit, a blacker-than-black Triumph Scrambler with an attitude that makes Sid Vicious look like Sid James. Dagger’s main blade is Roberto ‘Roby’ Polizzi, from the Northern Italian city of Biella. ”From what I can recall, I’ve always been in the two-wheeled world since I was a little child. I worked in a motorbike spare parts shop in the past and now in a motorcycle garage with my new project Dagger Cycles. The name comes from the two daggers I got tattooed on my arms; I also chose that name because it almost sounds like we’re ‘stabbing’ the stock bikes with modifications. Which is cool.” Roberto’s current theory is that customising a bike is more or less like listening to punk music. “You can have it hardcore and screaming loud or easy listening and simple. It’s always punk, it’s always a middle finger against pop, but the chords, the voice, the riffs are completely different.”

Dagger Cycles’ first creation was the “Little Misfit,” a sort of post-atomic insect borne from the ashes of a Yamaha TT350. That, says Roberto, was crazy hardcore. Now Roberto seems to have built something completely different. Granted, it’s not a full custom build. We’d like to think of it as more of a re-imagining of the original design, but with much more attitude. Bad attitude. “Herbert, the bike’s owner, wanted something with more mischief, but without cutting the frame in two. The main parts are in the same place in which they were assembled on the line in Hinckley: just some of the details have changed and, tah-dah, the Scrambler looks very nasty.” The specifics? The tank was brushed and decorated with a new, bigger logo and finished with coloured, transparent paint. The owner wanted it to ‘look shorter,’ so Roberto modified the rear fender and the seat without removing the bike’s ability to carry a passenger or having to chop the frame.

They then added a lot of little particulars made by Dagger Cycles themselves: a drilled side panel, the indicators, the MX handlebars and the new dashboard. The exhaust was an Arrow one and was literally cooked on a spit to achieve the patina you see here. Yummy. The new rubber is a new pair of Continental off-roaders, flagging that the bike’s more than a little ways away from original. As Roberto says, “why listen to One Direction when you can have Rancid?” The list of other Dagger additions is long. They fabled up bar-end mirrors, indicators, a seat, exhaust covers and side panels amongst many, many other bespoke pieces. The speedo is from Acewell, and the ‘bars are Ergal MX’s that have been black powder coated. The front and rear lights are Bates replicas. There’s a few after-market Triumph additions too, and it’s all held up with Gazi adjustable rear shocks.

All up, it’s one hell of a Triumph build and we’re more than a little excited to see what their next build produces. We’re fairly sure you’ll agree that this is one shop who’s amps definitely go all the way up to eleven.