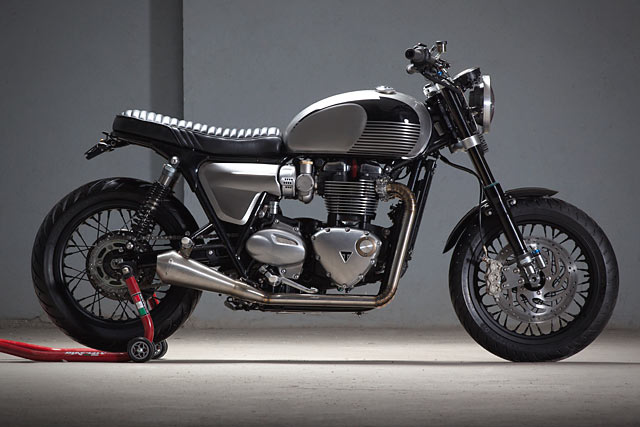 There’s some beautifully elemental things at the core of motorcycling. One is fire; I’m all for electric bikes, but you have to admit that internal combustion and motorcycles go together like guitars and rock. They are inseparable. The same goes for metal. If a super quick, super light plastic bike with absolutely no downsides appeared tomorrow, I’m sure many of us would feel quite nonplussed. Bikes have a metal soul and those that celebrate this tend to be the ones we really like. And this new Triumph build from Spain’s Kiddo Motors does just that. Our interview with shop boss Sergio Armet finds him and the business at a crossroads of sorts. “I am now changing my business approach a little. We have been working on commissioned bikes for 8 years now. But from here on the plan is to build just one bike a year, entirely from our own designs. The only other bike we’ve built like this was the ‘Kiddo Uno’ from 2011, all the rest were from customer’s briefs. We are also moving to a new facility soon and we have to deliver 4 bikes in the next few months”. Sounds like someone’s missing out on Christmas holidays, then. Next we asked Sergio what kind of bike it was. “I’m not fan of tagging bikes as one type or another,” he replied. ”I think that as per Triumph’s original design for the T120 this is a ‘Modern Classic’, so I guess that makes it a modified ‘Modern Classic’ for us”. Fair enough. Beyond the minutiae of naming conventions, the rest of the bike’s facts are clear. Sergio used a factory-fresh 2017 Bonneville T120 that was purchased new from the owner’s local Triumph dealership in London. As with many Triumph fans, we’ve been waiting for the company’s newer models to turn up customised. And bikes like this do nothing but increase our excitement. “I build all of my customs how I like my motorcycles in general: clean, light, elegant and sporty. In this case the weight battle was a hard one, but we managed to save around 20kg (or 44lbs) over the stock bike. So the idea was very simple; keep our own style. I think it is the kind of bike that will get older with a lot of ‘dignity’, if you see what I mean”. Sergio started by testing the stock Triumph to see which of its parts needed the most attention. “As with the previous Bonneville models, the suspension is not one of its strongest point so the first step was to order some Nitron forks and shocks. In the meantime, Kiddo amigo Adrian set about drawing up a design for the side covers, which were then fabricated by famed Spanish builder, German Cornaglia”.

In quick succession, the rear loop was also chopped and fitted to a new seat pan while the shop’s Chris tested his concentration by cutting and welding the exhaust manifold slices and eliminating the cat converter. When the Alpina Raggi wheels showed up, they made the call that Metzeler’s Roadtecs were probably the best tyre choice for the London weather that the new owner would be negotiating. Then two pieces of challenging news arrived all at once. “We were told that the front forks were running late and that Thibault, the bike’s new owner, wanted it ready for a 3000 kilometre (1800 mile) road trip with friends in a few short weeks.

“So we spent the last few weeks frantically working on the front-end, triple trees, fender and just about everything else to hit the deadline. Then there was some quick testing and a van trip to Bordeaux where the ride was due to begin”. [superquote]“This included the factory dash…it was the veritable Enigma Machine of the bike’s indecipherable electronic codes”.[/superquote]

In a common complaint, Sergio says that the bike’s electronics were a real source of stress. “We had less freedom on some custom parts due to the factory components that were nigh on impossible to replace: the ABS, ride-by-wire, switchable traction control and riding modes were all off-limits if the bike was to be delivered on time and on budget”. Naturally this included the Triumph factory dash; as with all modern rides, it was the veritable Enigma Machine of the bike’s indecipherable electronic codes. “I love the Triumph’s stance,” says Sergio. “ It’s also an elegant bike and hopefully it has a good balance of high-end parts and craftmanship. I love the handmade metal side covers and how they speak the same design language as the throttle bodies and the engine covers. Oh, and I also like our triple tree; it’s the first time we’ve done a full one like this and it really makes the bike”.