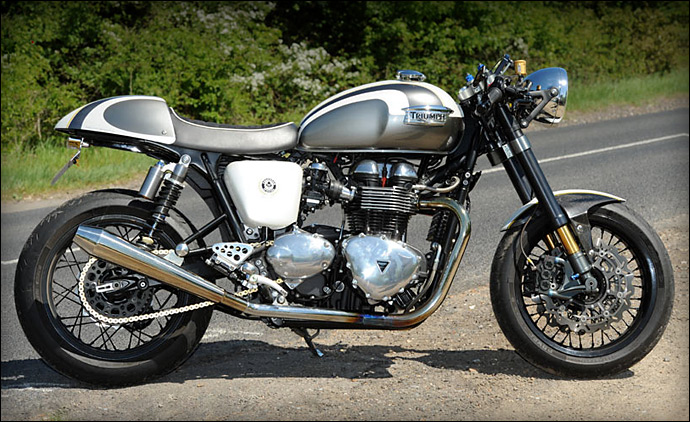 Meet thee coolest damn Thruxton you’re ever likely to throw a leg over – the Ace Cafe 904 Special. Built by British Racing Shop T3 in conjunction with the Ace Cafe and the Stonebridge Motor Company, the original inspiration behind the project was to create a more modern, faster, and better handling version of the Thruxton while retaining the classic looks and feel of the original bike. And from what we read, they haven’t failed in their mission. It’s only original parts are the chassis and engine block, but you can rest assured that they have been tweaked more than a little as well; the dyno results give it a healthy 80bhp and 60lb.ft of torque. The racing heritage of T3 means that the bike’s feel has been kept completely solid and controlled despite the large amount of mods undertaken. Ride reports tell of a loud, quick bike with a track-biased suspension set-up that still retains elements of the original bike’s laid-back approach. So put simply, you’re pretty much guaranteed to love it but the cops and the rest of your suburb may have other ideas. Interested? You’ll need a cool £16k to fill that Thruxton-shaped gap in your garage. That may seem steep, especially when compared to Norton’s new Commando, but I’m guessing that you’d save quite a few pennies buying this particular bike over doing it all yourself. And if you ever get bored with it, you’ll be able to mount it on the wall and open a local branch of the Ace Cafe. Maybe.