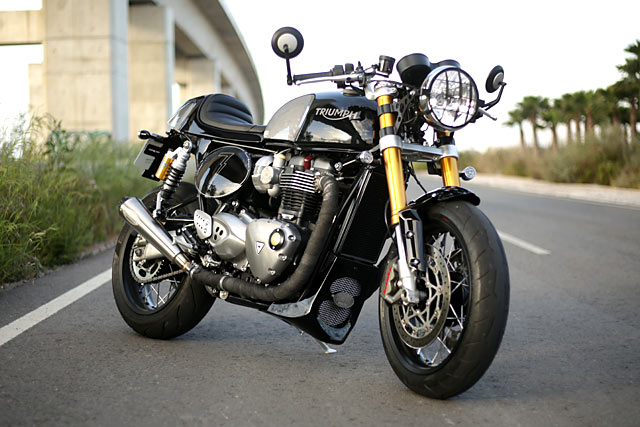 There’s a reason why Salvador Dali didn’t quit painting in this thirties to take up mime. Similarly, Jorge Lorenzo isn’t about to become a violinist and Hernando Cortez didn’t decide to throw it all in and make baskets a few days before he claimed the Americas. The moral of the story here is that doing anything truly great takes time. Time in which fashions come and go, things change and progress marches inexorably onwards. The ones that will be remembered stick at it like gum in hair. Spain’s Tamarit Motorcycles know this all too well, so to celebrate their 35th custom bike build, they decided to do what they do best; a classic cafe’d Thruxton. In between a website redesign and the workshop’s omnipresent customising activities, Tamarit (aka TMRT) have been getting busy developing a host of bespoke parts for the new liquid-cooled Triumph models including some pretty sweet fairings, grilles, covers and cowls. Add these to the company’s pre-existing, previous generation Triumph parts and it makes the shop pretty much unbeatable in their range and ability to modify their client’s bikes. Matias mentions to us that the donor bike was one of the very first of the new generation of Triumph Thruxtons – and a top shelf 1200R at that. “The motorcycle was nicknamed ‘Sombra’, due to its dark looks.” For those not in the know, ‘Sombra’ means ‘Shadow’ in Español. “The motorbike was bought by its owner at the Triumph Center in Barcelona somewhere around 2016, only a couple months before entering our workshop,” says Matias. “Actually, the owner was at first reluctant to modify his new bike that early in the relationship, but once he got the finished product he knew he had made the right choice.”

[superquote]“For those not in the know, ‘Sombra’ means ‘Shadow’ in Español.”[/superquote] “The inspiration comes from the ideas that the owner wants to be featured on the bike, as well as our advice of what would look good and what doesn’t. Sometimes, the owner of the bike takes the lead on the project and we’re just labourers obeying orders, but sometimes they give us full control of the project with free rein for our creativity and that’s when the inspiration comes in. Sombra was a mixture of both; the owner wanted a really dark and aggressive café racer and we were inspired by some of our previous creations like the Black Moustache.” With the kits ready to rock, Matias was lucky enough to find two clients with new Thruxtons to act as donor bikes, an R and a non-R model. After so many years working with the old carb Bonnevilles and Thruxtons, the new bikes appeared providing both excitement for the new metal and a the requirement for a fresh set of accessory designs. “We wanted classic ideas on new motorcycles, so we just had to stick to what clients and the riding public want the most – a twist on the Modern Classic concept using parts like a café racer cowl or a belly pan.” The process went quite smoothly with the usual small frustrations, but in general they were able to deftly apply the experience from their previous projects. “For us, it was like a pleasant walk in the park, mainly because we didn’t have to cut down the frame or undertake heavy modifications to the bike in order to install our parts. We’ve always wanted our parts to be user friendly and easy to install.” Sounds like a motorcycling version of Apple. Now there’s an idea. “Maybe the hardest part of the build was the headlight bracket adjustments along with the front suspension system. Also, those Öhlins are a really tough nut to crack and they have no markers to allow you to re-install them back into the correct positions. The other big challenge was the steel effect featured on the fuel tank and cowl, which was not hard, but really back-breaking. For the cowl, we had to adapt two metal surfaces in order to achieve the finish that our client wanted.” He was apparently more than a little infatuated by one of their previous creations that used the same technique. It looks amazing, but the shop says it has to be done with extreme care and patience if you want to achieve the desired effect. “We truly love how the cowl looks with the steel effect and mounted on this new Thruxton, it gives this whole café project a huge load of personality while uniting both the sporty and the classy. Moreover, we love the fact the you can go back on the process and take out most of the parts as many times as you want to. Just in case you want an extra passenger.”