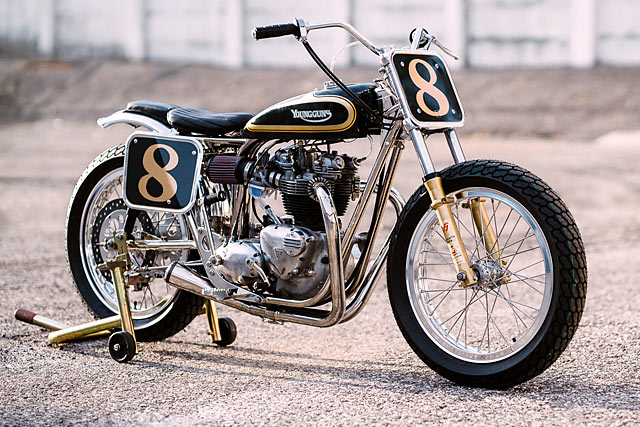 Switzerland’s Young Guns Speed Shop don’t discriminate. They specialise in restoring and modifying vintage motorcycles and have managed to tackle just about every marque from A to Z. From AJS to Zündapp, the work they’ve done is incredible and often with a healthy, dirt-based bias. This time around they’ve restored, modified and added their own magic an incredible 1971 Triumph Trackmaster they’ve dubbed ‘Lucy’. Before you get all confused, some clarification on the ‘Trackmaster’ line from Triumph. In an effort to compete in AMA racing in the late 60’s the Triumph factory approached fabricator Ray Hensley to make some bespoke, lightened frames with revised geometry to handle better on the dirt. A limited number of these homologated rolled off the line, followed by a number of other models. The Trackmaster is often considered one of the most desirable of the frames from this period.

But isn’t even the first Triumph Trackmaster Young Guns have in their collection. ‘My other Trackmaster is from the movie On Any Sunday,’ Young Gun’s Nic Heer explains. ‘It’s the same style but a different finish as our latest one. But my green Trackmaster is beaten up and gets raced often. So my plan was to build an authentic race bike, showing how it would hit the track in 1971 if someone was to have put all their effort in it’. The race-spec Trackmaster frame has a huge following among the ‘left, left again’ crowd throughout the world so they aren’t easy to come across. But Nic wouldn’t stop seeking out another. ‘I was looking for around five months before I found one in Norwich, in the UK,’ he explains. ‘The owner had it for many years’. But it was rough: ‘It was a monster. It had a red, flakey airbrush-style tank and an XR750 seat on it. You could see that each prior owner had done some work on it. It all worked,’ he explains, ‘but it looked terrible’. Nic’s donor bike came with a 1971 Triumph T120 engine in it, and it was going to be one of the few components to stay the course of the build. As well as the powerplant, Nic would retain the Lectron carburetors and beautiful magnesium Ceriani forks. Everything else was going to be removed in favour of bespoke and period-correct items. [superquote]“Nic wanted the whole thing to be able to be taken out on the street as well as the track.”[/superquote]

The first thing Young Guns Speed Shop did was machine new aluminium side plates on a bandsaw that also take the footpeg brackets. A new brake lever was machined for the left hand side so the bike could be made street legal. That’s right. Nic wanted the tracker to be able to be taken out on the street as well as the track. ‘I can plug a front headlight and brake light right into it,’ he says.

Heer then built the wheels and spacers, with no small amount of difficulty getting the rear Nickel-plated Brembo P2 34 caliper to fit, a component that costs more than some motorcycles I’ve owned. The hoops are Excel high walled numbers – and he’s got a second lined up for the front to take a disc there too, if he wants a little more stopping power around town.

A stainless steel exhaust system was made, running into a Supertrapp muffler. Around the sides, the number plates were made from aluminium. The list of modifications is, unsurprisingly, sparse for a race-spec motorcycle from the early 70’s. The tank is a matching Trackmaster fibreglass model, it’s fitted with an alternator to be able to run the road lights, new levers, footpegs, a magura dual throttle, Flanders handlebar and a rear fender. But that’s about it. All the work has been done with just the right level of flashiness without sacrificing its racing origins. Nic and the team at Young Guns are understandably very proud of their latest tracker creation. ‘The Triumph a mix between a very raw and simple vintage race bike and a shiny and spoiled custom,’ Nic Heer says. ‘It’s difficult to build a bike that’s super shiny but also appears sporty and actually useful’ As difficult as it is, Young Guns have pulled it off in exceptional style. Who’s betting that this won’t be the last time the guys turn their hands to a Trackmaster?