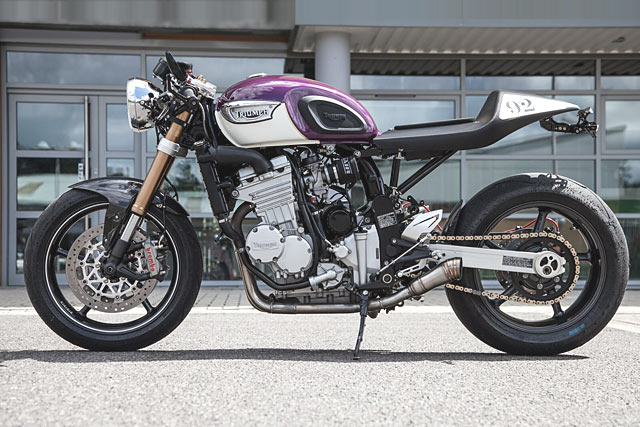 Whether you’re seriously looking for a donor bike for your next project or just day dreaming about what could be, we all do it; flick through the classified magazines, scour the internet or kick tyres at the nearest swap meet. Of course most of us are all looking for the same thing, the bikes that have traditionally been converted into the particular style of motorcycle we’re going for. Thankfully, some amongst us think outside the box and see potential in a machine mere mortals had already fobbed off. Joe Pitman has proven he rises amongst the pack with what started life as a fully faired behemoth weighing a stonking quarter of a ton. Now his 1992 Triumph Trophy has dropped the panniers, been transformed into a proper cafe race and is just at home outside a pub as it is on the track at Portimao. Joe managed to pick the Triumph tourer up for a steal at just £900 after discovering the big old girl on Gumtree and it proved even more of a bargain once work commenced. “When I started stripping it down I realised it was in fantastic condition for a 25-year-old bike, it seemed a bit sacrilegious to butcher such a nice bike.” But soon it was up on the alter in his shed, ready for the sacrifice to the custom Gods, a place Joe goes to pray as it were after a long day running his successful consultancy firm. Having owned a Triumph Daytona 675R as a track bike he instantly had in mind a way to keep the bike British and perform to perfection. The 675 parts start at the pointy end where an entire front assembly takes care of business, the race inspired USD forks bringing the machine closer to terra firma. To get them to fit a friend machined the stem of the 675’s lower triple tree so that it would mate up perfectly with the factory Trophy headstock. The new combination lowers the weight of the engine further over the front end for better feel and less dive under braking. Which is a good thing given Joe went all out with a set of Brembo M4 calipers, Ducati 1199R master cylinder, braided lines and titanium bolts to keep it all together. The rear end is just as impressive and continues the Triumph theme, as Joe explains, “The rear brake is a real mishmash of Triumph parts. The rears shock is from a Speed Triple with a custom-made preload adjuster bracket. While the stock swing arm is retained, I love the aftermarket look of those big concentric adjusters.” To match the front the rear wheel is also taken from a 675R helping to reduce un-sprung weight in addition to the overall mass. With the Daytona also donating its factory clip-on bars and race pattern rearsets. “Finally, I slapped on some old Supercorsa scrubs that I had lying around from one of our many Spanish trips”. The hardest part of the build for Joe was always going to be the visual component, “The sub-frame on those modular frames is huge and welded on, so reluctantly I had to cut it off to get the look I wanted. I made a much shorter and simpler sub-frame in aluminium square section with a set of tie rods to support it which then enabled me to adjust the angle of the subframe.” Sitting atop the perfected rear end is a fibreglass Honda RS 250 replica tail section that definitely puts the race in this cafe bike. While the tank also comes from the Triumph parts bin and despite initially hesitation the factory paint scheme remains. [superquote]“MotoGP-style end cans give a mean bark and with some serious re-jetting of the carbs, there’s a few more ponies to call upon”.[/superquote]

It suits the Trophy to a tee and is mounted just above that sumptuous Triumph triple cylinder 885cc engine now breathing through a set of Ram air filters. A pair of custom-made MotoGP-style racer end cans give a mean bark and with some serious re-jetting of the carbs, there’s a few more ponies to call upon. To keep the bike looking clean billet mounts support the single headlight and a Koso speedo provides only the vital signs. Finishing out the package is a Shorai battery and simplified electrics with the final weight saving a massive 50kg. So how does she go? So well in every key performance measure that Joe’s shed is now home to Trophy No.2 that’ll wear Ohlins, M50 Brembo’s and a stack of carbon fibre; and instantly one man has spiked the price of the faithful Triumph Trophy forever.