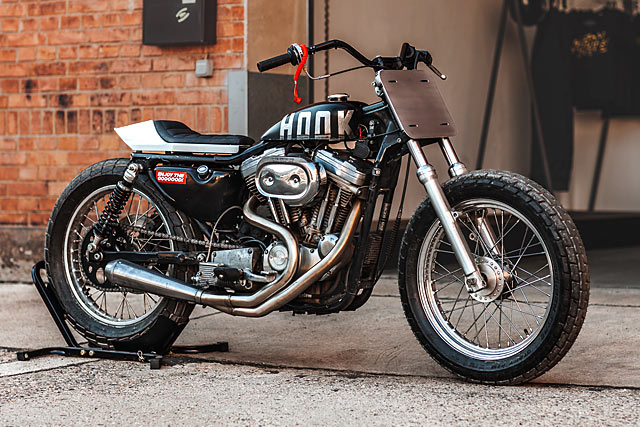 Our recent expedition to Northern Italy for the inaugural Wildays show gave us more than just ham-induced consumption, some sunburn and a flat track-related bung knee. It also provided us a chance meeting with Germany’s Hookie Co., who had set up shop right alongside the Pipeburn display area. Bumming their shade, we got to talking over this, their latest build. It’s a 1993 Harley XL883 that’s been given a new lease of life as one of 2017’s coolest trackers yet. Ever humble, they were insistent that they had just ‘thrown it together from spares’ for a bit of fun at the event. Were it not for the skills the team have exhibited to date, we’d be inclined to not believe them.

“Hookie Co. is based in Dresden and was founded in 2015 by myself and Sylvia Petrasch,” says chief truant, Nico Mueller. “We’ve got enough space for a workshop, a shop, a chill out area and a cafe. We mainly work on customs, but as we are both designers we wanted to create more than just motorcycles. So every half-year we create a new collection of designer products based on a new bike build. Our current collection is called Venom Inside.” After the XL883 was deemed appropriate for the project at hand, Nico began playing with the idea of seeing just how quickly he could turn the stock Sportster into a race-only flat tracker. “I love the work from Rusty Butcher and Suicide Machine Co., which was my main inspiration for this build.” The bike was sourced from a Dresden local who was also the bike’s first and only owner. He apparently bought it in 1991 at a Harley Davidson dealership in Minnesota, rode it around the country for a decade or so and then imported it into Germany. The Hookie team got the bike with an original 13,000 miles on the clock and some barely run in mechanicals.

“The build process was really quick,” offers Nico. “It was an ‘after work’ project with a very limited budget. Lucky for us we didn’t need parts for the engine, clutch or primary. A wheel conversion to a 19″ front and rear was the first step; I found a potential wheel on eBay, along with a suitable set of Goldentyre flat track tires.” Next, an order was placed for a few more more parts including a chain conversion kit, a rear spacer for the chain line, a set of flat tracker bars, some MX grips and two YSS Eco-Line shocks. After that, Nico went straight into the modification of the gas tank and seat. “I decided to chop the original Sportster gas tank to remove some height and width. And for quick removal, we added a single screw mount with a hole in the middle of the tank. So after only 3 or so hours, I got a rough but useable version of my tracker with its new gas tank.” Of all things, it was the seat that proved to be a real challenge for Nico – mainly as it was the first time that he had really done any serious aluminium fab work. “Also, the Harley’s subframe is hidden under the seat. It not only allowed me to keep the straight line between the tank and seat, but it allowed for the perfect seat height, giving the bike much better weight distribution.” “I like really the rough style of this machine – it’s not complete rebuild, overly clean or painted,” Nico notes. It’s no nonsense, built-for-a-purpose tracker style really floats out boat, too. “The next step is to get a street-legal version of the Harley so we can ride it to the racetrack, not just on the racetrack.” Bring it on.