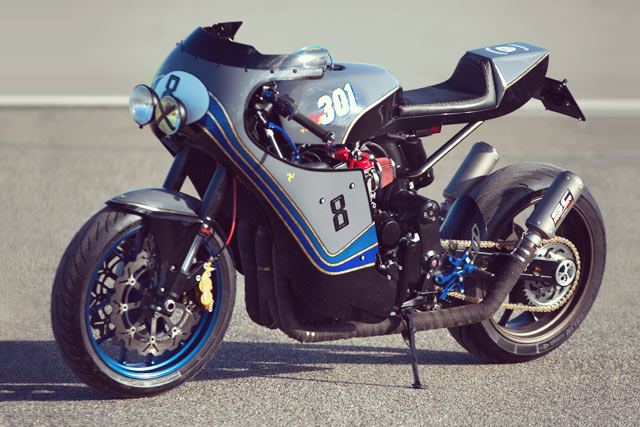 Imagine, if you will, a nightmarish, post apocalyptic world in the future. Mad Max. Kurt Russell in Escape from New York. Planet of the Apes, but with bikes instead of horses. Now somehow in this dusty, rusty future they are still running the TT. It’s nothing more than a motley gaggle of bike freaks who clear the road of debris and dead cows once a year to try and relive the glory days the race once knew The bikes they ride? Well, we think they’d look an awful lot like this amazing Triumph Speed Triple from Italy’s Iron Pirate Garage. All it needs is a shotgun, a mohawked rider and a few more spikes. Iuri Castaldi, Iron Pirate’s evil captain, starts off our chat by letting us know that he’s anything but custom mega corp punching out cookie cutter cafe racers. “I only have a small garage in Tuscany, where I build just one or two bikes at a time, all strictly handmade by craftsmen. And that craftsman is me.” Building bikes is something that Iuri has done pretty much all his life, too. “I was born in my father’s workshop, and I learned everything from him as a child. You name it, I’ve probably fixed or rebuilt it. I started bike customising in 2000, after learning how to properly use all the equipment needed to build and create the bikes in my head.” “I always really loved this era of Triumph, the ones with real carbs, and of course I love Isle of Man road racing,” says Iuri with a peculiar look in his eyes. “That was the real inspiration for me when I was building this bike,” he explains. He came across the donor bike in Milan, where it had been put up for sale by the owner who wanted to get rid of it. Iuri soon realised that it was his favourite – a ’94 T301 Speed Triple model. Bellissimo. “When you decide to undertake a project as complex and lengthy as this one, nothing is easy. Ans nothing ever goes smoothly. It takes a lot of passion and patience to find the right combinations, and you always have to watch the budget. It took 15 months from start to finish but like any great bike ride, for me the journey is as enjoyable as the destination.” And with a destination like you see here, that must have been one hell of a ride. It’s wasn’t until Iuri showed us his shopping list that the real length (and expense) he’d gone to became apparent. Magnesium Oz Racing wheels top the list, with a pair of Brembo gold series callipers called in to slow the go. Then there’s the clutch and brake levers from Accossato Racing, a pair of repurposed Ducati 996 front forks and a Hyperpro mono shock in the back. Accossato also supplied the intense blue and black anodised rearsets to match the Triumph’s other electric blue highlights. “The motor was completely disassembled, overhauled and redesigned for better performance, but we didn’t stop there. The carburettor and intake manifold were thoroughly worked over to improve their performance. A bespoke exhaust with SC Racing cans was then made up. We even lightened the rear swing arm, such was the attention we gave it.”

The cowling was based on an old ‘70s fairing Iuri bought a few years ago, and while he was at it, he beat out the new tank and the tail section by hand. The tail hides both the electricals and the tiny new battery, while attached to the other end of the wiring is a slick new Motogadget Mini display. The decidedly ‘70s paint scheme was entrusted to his good friend at local paint shop, Ricky Custom Painting. “Given the vintage-styled race theme, I decided to dedicate this livery to the Isle of Man race, and the TT protagonist who I respect most of all – the legendary Guy Martin. Hence the number 8 on the fairing.” “The bike is now a fantastic racer. The suspension makes the bike feel like it’s glued to the road, the brakes are always ready for more and the engine is much brighter now thanks to all the work done to it. After an extended test of the finished bike, I can say that what I like most about it is me riding it.” Ha! Well played, Captain Castaldi. Well played.